Extreme Exaggeration of the Climate Commission.

extreme exaggeration and high risk of being wrong

The Climate Commission [CC] has form for hyperbole, cherry-picking and just plain lying. It’s at it again in its latest report dealing with ‘extreme weather’.

It’s author and leading spokesperson Will Steffen was interviewed on the ABC [where else?] and said:

Well, let’s look at the Bureau of Meteorology’s own data. The South-western region’s rainfall history is shown here: 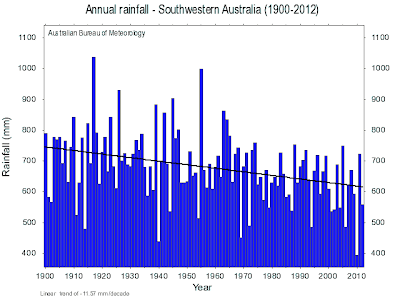 In fact rainfall has been declining since 1900 and has actually been flat since 1970.

What about the South-eastern region: 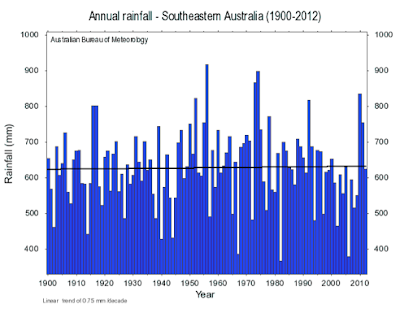 Steffen is well credentialed academically but has a history of being loose with the facts. And he persists in doing it!

His other partners at the CC are equally alarming in their views about climate and science; David Karoly has great form for arrogance, exaggeration, being wrong and so on but is generally regarded as the brains of the CC.

Flannery is beyond the pale and has cost Australia $billions.

Despite this the ABC leads its coverage about the CC’s latest ‘extreme weather’ report with:

The nation's top climate scientists and science bodies have for the first time endorsed a major report that says Australia's climate has shifted permanently in some cases.

What hubris; “Australia’s top climate scientists”; and they can’t even get their own facts right!

How can we now accept that when the CC’s last report about the “Angry Summer” contained so many errors and misrepresentations? For instance Newcastle is listed as having a record temperature of 42.5C. This can be checked at the BOM site. It happened on Friday the 18/1/13. However on the same page the mean maximum for January is shown as being 26.9C. Compare that with the history of monthly mean maximum temperatures at Newcastle. The highest January maximum was in 1882 and the hottest period was before 1890.

Australia has had many floods, droughts, heatwaves, worse than what we are seeing today. The CC’s fear-mongering is ideologically based and part of the AGW scam.

After the 14 September, closing the CC should be the first step towards reinstating a rational basis to science in Australia.
Posted by Geoff on April 03, 2013