Can the Climate Commission ever get it right?


The Climate Commission: latest report; can they ever get it right?

The Climate Commission [CC] has been dogged by controversy since it was set up to explain the certainty of AGW. Its latest report is no exception. The report begins by saying:

An insulation effect at the cool-skin layer of the ocean [as promulgated by Peter Minnet, Real Climate and Rob Painting, Skeptical Science and obviously agreed with by the CC] would be ineffective because energy would still be lost radiatively and evaporatively even if conduction was inhibited (it isn’t).

If heat from the atmosphere is “transmitted” to the ocean the temperature gradient must be atmosphere => ocean but global average atmospheric temperature is about 3ºC COOLER than the ocean.
So even if the oceans are warming they are NOT warming due to AGW, even if AGW exists, and there is very strong evidence it doesn’t. So much for "the physics being very well understood".

Are the oceans warming? The CC says yes and shows this in Figure 1. 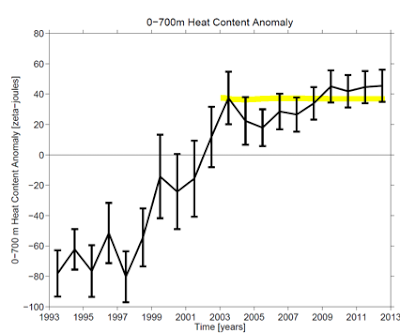 Next the CC makes the claim that temperature adjusted to remove natural factors is still increasing as shown in Figure 3. To prove this they link to Foster and Rahmstorf's paper from 2011.

This paper is bad and even amongst AGW science represents a nadir. F&R attempt to isolate the AGW temperature signature by removing the natural factors; so they remove MEI [ENSO], volcanoes [AOD] and the sun [PMOD]. According to their 2nd equation as scientist and blogger ferd berple observes:

F&R have not solved for GISS. By including Trend (GISS) as an independent variable they have eliminated GISS. What they have shown is that the Trend in GISS can be fully explained as a linear result of MEI, TSI, and AOD, without any reference to CO2.

In other words, F&R have proven that Climate Change is fully explained by the Multivariate ENSO Index (MEI), the Total Solar Irradiance (PMOD), and the Volcanic Aerosol Optical Depth data (AOD).

In other words, F&R have proven that CO2 has no role in climate change.

Removing natural factors to establish a 'pure' figure for AGW is a tautology because it is based on assumptions about the existing temperature forcings by the IPCC which have been proven to be wrong.

Perhaps with this in mind, the CC, and Foster and Rahmstorf have been trumped by Pachuri who has made it plain that temperature has not changed in 17 years.

This is manifestly clear from a comparison between all the major indices which show no temperature rise ranging from 11 year and 7 months for GISS to 16 years and 1 month for RSS. 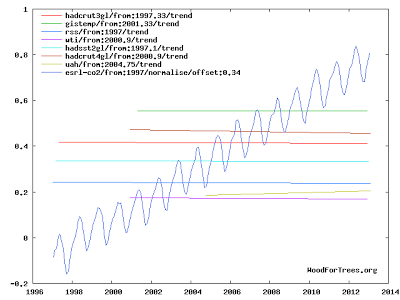 In short the CC report is the usual mixture of half truths, no truths and incompetence. Given its considerable cost and expertise the public has a right to expect at least the basics to be right.