"Carbon Sense"
Common sense on carbon, food, energy and climate.
Please pass on to media, politicians and the public.
www.carbon-sense.com

The Carbon Sense Coalition has created “The Gorbel Prize for Green Policies that have Inconvenient Outcomes”.

The Chairman of Carbon Sense, Mr Viv Forbes, said that so many green policies that appear to have useful environmental goals fail to analyse properly the long-term unforeseen consequences.

Green politicians need to learn Newton’s Law of Government Regulations: – “Whenever government legislates to force an economic outcome, the long term effect will be equal and opposite to that intended.”

Nowhere is this more apparent than in the world of green politics, where laws designed to help the environment are harming the environment. To publicise this stupidity, the Carbon Sense Coalition has created “The Gorbel Prize for Green Policies that have Inconvenient Outcomes”.

The winner of the Inaugural Gorbel Prize is the UK government whose green policies aim to make it uneconomic to burn coal. So the tax-payer funded Green Investment Bank has loaned £100 million to help convert the huge Drax coal-burning power station in Yorkshire to burning “sustainable biomass”. This is part of a huge finance package of one billion pounds to get the biomass green tick, earn renewable energy subsidies, and avoid the need to buy carbon credits.

Where do they plan to get the “sustainable biomass”? Each year 7.5 million tonnes of wood chips will be imported from North American forests to replace 4.5 Mt of coal.

The land required to produce wood at this rate is immense - about three million acres of forest per year.

There is one real benefit from the scheme. When the whole process is considered, using wood will put more carbon dioxide back into the atmosphere than using coal. This will make the forests grow faster.

Such green stupidity will take us back to the BC era (before coal) when forests and hillsides were stripped bare of trees to fuel stoves, heaters, boilers, charcoal makers and smelters.

We would all be better off if Drax burned coal, produced cheap electricity, saved those forests and, to satisfy green dogma, planted a token forest of new trees.

For those who find the above unbelievable, here is one reference:
http://www.bloomberg.com/news/2012-09-25/biggest-english-polluter-spends-1-billion-to-burn-wood-energy.html

And here is a detailed report on combustion products from carbon fuels:
http://carbon-sense.com/wp-content/uploads/2010/06/coal-combustion.pdf

Nominations are invited for future recipients of the Gorbel Prize.

That serial alarmist, Professor Flannery, says “Solar and wind could be the cheapest form of power by 2030, if not earlier, as carbon prices (he means taxes) rise”.

That is like me saying that I could beat Roger Federer at tennis as long as he is forced to use a cricket bat instead of a tennis racquet. Or I could outrun Cathy Freeman as long as she has her shoe laces tied together by race officials.

Demolition is easy. Any industry can be destroyed by taxing it to death while subsidising its competitors. So the Flannery Plan can be made to work as fast as he likes.

But cheap reliable coal-fired electricity will not die alone. Consumers will suffer greatly, big industrial users will migrate, asset values will be destroyed and real jobs will disappear.

The Flannery Plan will enrich green power speculators and foreign manufacturers, and create regiments of paper jobs in the law, the bureaucracy and academia.

The global climate will be unaffected.

For several years the Australian media has been dominated by a long running science fiction. Designed for radio, TV and print media, it is called “Green Houses” in an apparent attempt to benefit from the well-loved “Blue Hills” a soap opera which ran for 27 years on the government-owned ABC radio.

Each weekly episode of “Green Houses” dramatizes a new global warming disaster, all attributed to man’s generation of carbon dioxide from the use of carbon fuels. The series is directed by a drama company called “Green Pieces” and produced by the Minister for Climate Propaganda. The weekly script is written by academics funded by government “Green House Grants”.

Its early episodes featured devastating heat waves and never ending droughts, but a few severe winters in the Northern Hemisphere and massive floods in Australia eroded the credibility of the series and audience ratings fell.

Now the whole credibility of its bedrock Green House story is under threat.

Sceptics ask how a tiny quantity of an invisible, incombustible gas with no inherent heating ability can warm the vast volumes of other gases in the atmosphere while also overcoming the massive heat capacity of the land and oceans.

“Green Pieces” has drafted the answer: “Carbon dioxide absorbs infra-red radiation from the warm surface, creating ‘back radiation’ which re-warms the surface”.

This process does indeed have an insulating effect at night, when clouds and the atmosphere can delay the escape of some outgoing heat.

However, during the day, the atmosphere has a big shading effect on incoming solar radiation which contains UV, visible and IR components. Clouds, aerosols, dust and greenhouse gases all act like atmospheric umbrellas and reflectors and provide some protection for the surface from the incoming heat of solar radiation. This provides a net cooling effect during the day which offsets and probably extinguishes any night time warming.

The main effect of the atmosphere is thus to moderate the daily temperature range - warmer nights and cooler days, with little effect on average temperatures. Carbon dioxide is only a bit player in this drama - water vapour is far more abundant and a far better insulator.

This fundamental flaw in greenhouse theory, coupled with the lack of surface warming in spite of rising carbon dioxide levels, has led to dramatic falls in audience numbers for the once-popular “Green House” series.

It is rumoured that the producers of the series are preparing to replace it with a serialised science fiction thriller titled “Blue Skies are Falling”.

This series will feature a wizened black devil called “Old King Coal” as the villain responsible for every extreme weather event.

Have you wondered why carbon energy giants such as Shell, Exxon, BP, BHP and Origin Energy are in favour of carbon taxes, carbon capture and green energy subsidies?

It’s neither altruistic concern about global warming, nor to boost the investment return from their solar panels. Rather, they have all made big investment bets on that other carbon fuel, natural gas. Killing off coal suits their bottom line.

Coal is the biggest competitor for gas in many energy markets. The carbon tax and mandatory carbon dioxide capture will fall heaviest on coal and will ensure that few new coal-fired power plants are built. And green energy targets and subsidies will force-feed electricity playthings like wind and solar power.

But wind and solar can only produce costly intermittent power, and must be backed up by reliable energy generators which can be switched on and off at the whim of the weather. In most places, that probably means GAS.

Thus, when coal and nuclear power have been assassinated by the greens, and the wind and solar farms are rusting away in industrial oblivion, the main generators left standing will be ... gas-fired power stations. And everyone will pay even more for electricity.

The gullible greens have been gazumped by the gas giants.

Climate alarmists want to ration carbon fuels such as coal, oil and gas to reduce the production of the harmless invisible gas, carbon dioxide. This is supposed to make the climate cooler, stabilise sea levels, prevent bad weather, save polar bears and win the election.

Coal produces 75% of Australia’s electricity. Another 15% comes from gas and oil/diesel – a total of 90% from demonised carbon fuels.

To force people to use less carbon fuels, politicians have passed a mess of laws whose purpose is to make carbon-fuelled electricity prohibitively expensive.

These policies have succeeded dramatically. Carbon taxes, renewable targets, market mandates, cross subsidies and costly red tape have made all electricity more expensive. They even legislated higher feed-in prices for electricity from domestic solar panels. And they now push smart meters so they can charge consumers even more for electricity when they need it most – during peak hours.

But there has been no effect on global emissions – we pay more for nothing.

Now politicians weep crocodile tears. They caused the high electricity prices but now discover that consumers don’t like it. When they are forced to admit it was another ghastly mistake, the solution is obvious: scrap all the costly and pointless laws that are increasing the price of our electricity.

I noticed the ABC news trying to beat up a global warming scare story from the current central Australian heatwave. An old Alice Springs resident being interviewed spoilt the punch-line by remarking something like: “It’s summer, and it’s usually hot in summer.” A close look at historical data will show that the Australian heatwaves, droughts and bushfires of 100+ years ago were just as bad and worse than today.

Here in Rosevale, in South East Queensland, the highest temperature we have recorded in the last 22 years was 44.2 ℃ in the shade on our back landing on 12/1/2002.

Mike Williamson has had a look at the records from the nearby Amberley Airbase. See:
http://carbon-sense.com/2013/01/13/2013-se-qld-heatwave/

And Jo Nova records some of the observations from the early explorers. See:
http://joannenova.com.au/2012/07/charles-sturts-time-so-hot-that-thermometers-exploded-was-australias-hottest-day-in-1828-53-9c/

Finally, the UK Met Office admits there has probably been no global warming for sixteen years. See:
http://www.bdlive.co.za/opinion/2013/01/14/last-year-was-probably-not-the-warmest-year

Climate will change naturally, as it always has; and occasionally we will get extreme weather, as we always have.

Move along folks, nothing unusual to see here. 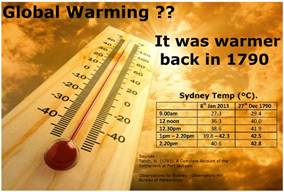 Count your Blessings – a Fairy Story

They complained about the coal mine, sitting quietly beside its own power station and producing cheap reliable electricity.

So we gave them 500 gas wells, each with its own access road and a network of pipelines taking gas to the distant power station.

Then they complained about the traffic, and the maze of pipelines and wells, and coping with the waste water, and the rising cost of electricity.

So we gave them 5,000 noisy wind turbines and 10,000 dust-collecting solar panels, with a vast spider-web of access roads and transmission lines.

And the price of electricity soared.

But then the wind failed, clouds obscured the sun, the grid suddenly became unstable, and the lights went out.

Now they wish they had stuck with the coal mine and its neat and dependable power station.

We are entering a new year which will see the climax of the war on carbon. It is downhill from now for the climatists. Take time off to listen to the whole of that great movie: “The Great Global Warming Swindle”:
http://www.brasschecktv.com/videos/spin-1/the-great-global-warming-swindle---full-version.html

Disclosure: Viv Forbes has a degree in natural sciences and a lifetime of practical professional experience in subjects relevant to climate history, the carbon cycle and energy technology and economics. He is old enough to be retired and is self-employed and thus will be largely unaffected by the long term effects of today’s silly carbon policies. But he does use electricity, breeds ruminants, uses some wind and solar power and holds shares in, and acts as a non-executive director of a small Australian coal exploration company. He is founding Chairman of the Carbon Sense Coalition.

We still have a lot of spam checkers stopping our emails. Pls make sure we are an "allowed sender", or check your "Junk Mail" folder. And let us know when you change your email address or if you have not heard from us in ages.

We need help is spreading the word. Please forward this newsletter to contacts, media and politicians.