NCTCS blog is dedicated to ensuring the World hears the truth about the Climate Change hoax.

Below is a video where Alex Jones' Rob Jacobson and David Knight discuss their conversations with representatives of the organization who refused to go on camera to defend global warming "facts".

The George Soros funded organisation Forecast the Facts attended the annual convention in Austin of the American Meteorology Society (AMS). Their purpose in attending the meeting was to try and convert TV Meteorologists to become propagandists. This surely makes a lie out of their web site heading -

Forecast the Facts is dedicated to ensuring that Americans hear the truth about climate change. 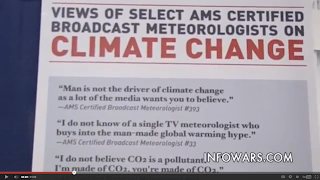 Forecast the Facts? Is that an oxymoron?

Forecast the Facts conducted an interesting Poll of the Meteorologists at the AMS meeting:
What is the cause of Global Warming -


Another interesting point was the FTF people were distinguishing between Meteorologists and Scientists.  Hey FTF, Meteorology is a science.