AGW and CO2: If Humans are not responsible for the CO2 increase then there can be no AGW. 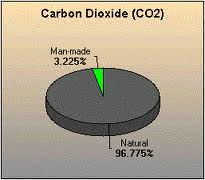 The basic science supporting AGW has been shown to be defective.

The issue is complex because there is a bulk and flux component to the role ACO2 may play in adding to CO2 levels.

At the beginning of the AGW debate it was thought that ACO2 was causing all the increase in the bulk because of isotope tracking. There are 3 basic varieties of CO2 distinguished by their isotope and it was assumed that ACO2 could be separated from natural CO2 in the bulk because of differences in the relative isotope proportions. However similarities between the isotope of ACO2 and natural sources of CO2, particularly from vegetation and the differential operation of Henry's Law on the different isotopes [see comment 413] means the isotope distinction cannot be conclusively used to prove ACO2 is entirely responsible for the increase in the bulk.

However an argument against ACO2 being responsible for all the increase in the bulk can be found in Knoor’s 2009 paper.

Knoor has been supported by the Gloor et al paper.

The other part of the issue of whether ACO2 is contributing to all of the increase in CO2 levels is based on the annual fluxes. The annual fluxes are shown by Figure 7.3 of AR4.

DOE, Table 3, shows that approximately 98.5% of the total flux is reabsorbed in sinks, predominantly natural although cropping would add a miniscule amount.

But this is what caught Alan Jones out; it does so because it confuses the residence time of one molecule of ACO2 and the time required for the all the CO2 in the atmosphere to return to the level it was before the ACO2 emissions began adding to the atmospheric bulk.

Effectively, this means that while one ACO2 molecule does not remain long [4 years] the effect of all the ACO2 on the atmospheric bulk is long-lasting [74 years] and therefore supports the idea that ACO2 is the main reason for the increase in CO2.

However, Essenhigh uses a "one box" model in which flux from the atmosphere has a proportional relationship with the concentration [bulk] of CO2. Essenhigh expresses this as:

This assumption by Cawley contradicts Henry's Law. Henry's Law says that the rate of diffusion or movement of gas from the atmosphere is dependent on temperature and the concentration of the gas; as the concentration changes so does the rate of movement. But Cawley’s constant, F0, would mean that when there is zero CO2 in the atmosphere (C=0) there would still be a finite flux (F0) of CO2 from the atmosphere! That is to say Cawley’s model allows for bulk CO2 to become negative.

Essenhigh's model is to be preferred and means that Knoor's bulk analysis is correct; that is, most if not all the increase in CO2 over the 20thC is not coming from ACO2.

How does this tally with the observed data and more importantly the official AGW position?

The official AGW position is that up to the 20thC emissions of CO2 were all natural and evenly matched with natural sinks. Sinks are absorbers of the atmospheric CO2. The main sinks are the ocean and vegetation. This ‘balance’ whereby emissions and sinks are about equal with no variation in atmospheric CO2 is shown by Figure 1.

The past record of CO2 is usually based on ice core records. There are some problems with the ice-cores as Drake and Jaworowski show. There is also some irony since the ice core record is rejected by AGW advocates when it contradicts AGW such as showing the Holocene temperature being higher than today.

Arguably the most reliable history of past CO2 levels is from plant stomata records as Figure 12 shows. Figure 12 indicates past levels of CO2 were almost at today’s levels as recently as 1550. In addition chemical analyses of CO2 levels in Figure 13 show CO2 levels higher than today in the early 1800’s.

This is easily rebutted and has been done so by Tom Quirk. Figure 1A from Quirk shows the ACO2 emissions with the increase in atmospheric CO2: 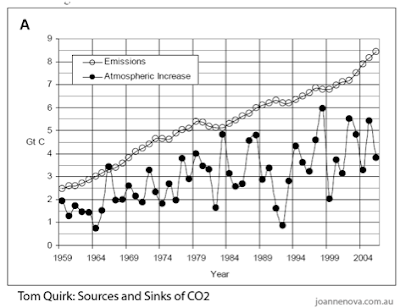 If AGW were correct about the equilibrium between natural emissions of CO2 and sinks the atmospheric increase would mirror the ACO2 emissions; it doesn’t. That means that sinks and natural CO2 emissions vary and are not in equilibrium.

In fact Quirk shows the natural CO2 emissions and sinks are strongly correlated with changes in ENSO, the pattern of El Nino and La Nina episodes This confirms and possibly explains the past history of stomata based CO2 levels, and most importantly, in connection with Knoor and his finding that the airborne fraction of ACO2 has not changed in 150 years, shows that ACO2 is not the major contributor to rising CO2 levels.

The ramifications for AGW are profound; if human CO2 is not the main cause of the increase of atmospheric CO2 then AGW is wrong.
Posted by Geoff on January 10, 2013