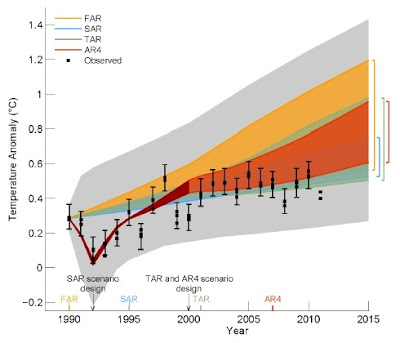 Editorials and Op-Eds from Overseas:

For nearly a week, a leaked draft of next year’s “Fifth Assessment Report” on climate change, by the United Nations’ Intergovernmental Panel on Climate Change (IPCC), has been burning up the blogosphere. Since it’s everywhere, I’ll take my liberties and join the party.

The most impressive figure [see above] shows how badly one of their most-cited series of predictions is faring.  Explanation follows.

The colored shading shows the projected range of global annual average surface temperature change from 1990 to 2015 for models used in the succession of IPCC assessment reports, labeled “FAR” (First Assessment Report, 1990), SAR (1995), TAR (2001) and AR4 (Fourth, 2007).  The “emissions scenarios” generally cover the range from each report during the period from 1990 to 2015, and the changes in atmospheric greenhouse gas concentration that have been observed pretty much fall within this range.  The very large grey zone is irrelevant to the forecasts that were made.

The three small black rectangles each year are the observed global temperature histories in common use.  For every year except the last one (2011), the black “whiskers” are an estimate of the 90% confidence range for the observed temperature. Since the three records pretty much use the same data, I wouldn’t have a lot of faith in the reality of those whiskers. Data were not fully available for 2011, so any whiskers would not be comparable to the others. Quite obviously, for more than a decade, the observations have fallen near or below the lower end of the IPCC projected range. Houston, we have a problem.

Will this chart will be altered or disappear completely in the final IPCC report due in 2013?

When politicians want evidence to back up their belief that mankind is heating up the planet, they turn to the Intergovernmental Panel on Climate Change (IPCC). The Nobel Prize-winning organization was responsible for the famous hockey-stick graph used to demonstrate the purported warming effect of man-made carbon dioxide. IPCC’s notoriety has turned out to be a two-edged sword, as leaks continue to undermine the group’s core message.

In a statement Friday, IPCC officials confirmed the authenticity of a leaked draft of the forthcoming Fifth Assessment Report on climate. Skeptics seized upon a chart within the document that compares past IPCC predictions with actual temperature readings. The scientific models of 1990’s First Assessment Report forecast temperatures would rise fast, reaching alarming levels by 2010. The mercury refused to cooperate with the warming hypothesis that year. In 2012, temperatures also were frostier than the generous assumptions in each of the group’s four previous reports.

The environmentalist movement has gone off the deep end. It's bad enough that the courts have allowed the Environmental Protection Agency (EPA) to declare carbon dioxide, one of the essential components of life on this planet, to be a pollutant. Now the same bureaucratic zealots are going after water itself.

On Friday, Virginia Attorney General Kenneth T. Cuccinelli II appeared in federal district court in Alexandria to contest the EPA's use of the Clean Water Act to punish Virginia and Fairfax County for sending too much water into a watershed. "These regulations are expensive, cumbersome and incredibly difficult to implement," Mr. Cuccinelli said. "And if we can't stop this from happening in Fairfax County, it's bound to happen across the state over and over again and at a huge price tag to the taxpayers of the commonwealth."

The EPA's latest action is a classic example of how Washington agencies constantly expand their purpose. Congress first adopts legislation bearing a title nobody could reasonably oppose -- who's against clean water? Over time, the courts and bureaucrats systematically extend the meaning of formerly innocuous definitions. Now instead of keeping lead out of drinking water, the agency is keeping water out of creeks.

Climate Alarmism: The Beginning of the End?

John reported here the other day about the leaked portion of the forthcoming report of the Intergovernmental Panel on Climate Change (IPCC) which admits the possible role of cosmic radiation in cloud formation.  This may be the first time the IPCC has acknowledged this as a possible factor, even though the hypothesis has been around for more than 20 years.  But the big ball game all along in climate science has been whether estimates of climate sensitivity to greenhouse gas levels would change in future IPCC reports.  Here’s what I wrote about the matter in the Weekly Standard in 2010:

Eventually the climate modeling community is going to have to reconsider the central question: Have the models the IPCC uses for its predictions of catastrophic warming overestimated the climate’s sensitivity to greenhouse gases? . . .  The next wave of climate revisionism is likely to reopen most of the central questions of “settled science” in the IPCC’s Working Group I.


For more of each item, click on the title for the original source.

The basic idea of a hypothesis is that there is no pre-determined outcome. For a hypothesis to be termed a scientific hypothesis, it has to be something that can be supported or refuted through carefully crafted experimentation or observation. (Link - Live science)


Here is an interesting experiment that you can duplicate at home.  Put "Hatred of Science" in your google search box. You get about 33,100,000 results. And who comes up as the 2nd out of 33m?

Robyn Williams! in an item from VEXNews.  From that page:


The matter-of-fact tone is deliberate and sadly typical of the ABC’s snide condensation. Williams is an expert at it, knowing that most of his audience shares his worldview.

The sweeping generalisations about anti-sciencism, the nods about superior secularist minds over religious ones and the winks acknowledging one’s sounder psychological wellbeing over your enemy: it’s breathtakingly smug.

Perhaps he’s been doing it so long that there’s no longer any sense of danger about this.

The public is owed an apology by Williams. It is not science journalism to present deception political opinion as if it were scientific objectivity. Williams was providing political opinion, reviewing a political book by a polemicist, not a scientist.

That broadcast was intellectually fraudulent.

Robyn Williams latest buttburst was published by this blog under the heading:


Let's rid the airwaves of this bile.

This morning on the “science” show Robyn Williams equates skeptics to pedophiles, people pushing asbestos, and drug pushers. Williams starts the show by framing republicans (and skeptics) as liars: “New Scientist complained about the “gross distortions” and “barefaced lying” politicians come out  with…” He’s goes on to make the most blatant, baseless, and outrageous insults by equating skeptics to people who promote pedophilia, asbestos and drugs  (link - Jo Nova)

The pages have written before of the Green Gillard Government's actions to gag opposing opinion to their socialist policy and actions, eg:


So Has Robyn Williams been let off the hook for his last Bileburst?  YEP!

On Tuesday, The Australian reported that the ABC had dismissed a complaint by its former chairman, Maurice Newman, against science broadcaster Robyn Williams, who made a comparison between climate change deniers and pedophiles last month. An ABC spokeswoman said the complaint was dismissed because the editorial context of the segment was reasonable, meaning "harm and offence" was justified.

The ABC lets itself off the hook

ANYBODY who takes the Finkelstein report at face value would be bemused to learn that it is absolutely fine for the ABC's science presenter to compare climate change sceptics to pedophiles.

Former Federal Court judge Ray Finkelstein's report into media regulation found that the ABC was the "most trusted" media organisation in the country and that its "editorial quality assurance projects" and complaints-handling processes were first class. Yet the ABC's Audience and Consumer Affairs section says Robyn Williams has no case to answer over his questionable comparison between sceptics, child abusers and drug pushers on Radio National last month. The complainant was none other than former ABC chairman Maurice Newman, who was personally attacked by Williams in the same on-air conversation. Williams described an opinion article Mr Newman wrote for this newspaper as "drivel".

By coincidence, the Australian Press Council has also been adjudicating on an allegedly offensive use of the word pedophile, this time in an opinion article in The Australian by James Delingpole. Mr Delingpole quoted an anonymous NSW sheep farmer who said: "The wind-farm business is bloody well near a pedophile ring. They're f . . king our families and knowingly doing so." In the council's view, the comparisons with a serious and odious crime "were highly offensive".

The Editorial goes on to point out that "Williams's comments were hardly accurate or impartial, as ABC policy requires."

If the ABC doesn't have to follow it's own "Editorial Policies ( pdf link)" why have them in the first place?