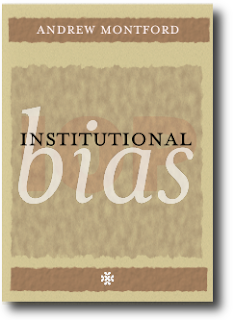 
Andrew Montford of Bishop Hill fame has published a book, or as he describes it, a pamphlet titled Institutional Bias. (LINK)


In 2007, the Energy Group of the Institute of Physics (IoP) agreed to invite the former Chancellor of the Exchequer, Lord Lawson, to speak to them about his new book on global warming. While all the members of the group's committee were enthusiastic about the idea of hearing from someone so prominent, their decision unleashed a bizarre sequence of retaliatory actions, which left the Energy Group in tatters.

Told through the eyes of group chairman, Peter Gill, this new pamphlet reveals how one learned society has attempted to deal with dissenting voices on the global warming question and paints a disturbing picture of intolerance and bias.

The incredible correspondence details a conspiracy to silence any and all dissent challenging the alarmist mantra of human-induced climate change. Self-serving senior figures within the IoP are shown to have harassed and harangued every attempt for a grassroots debate among members over the global warming controversy.

Constantly, the supporters of the AGW hoax maintain that every or most etc of the major scientific bodies say that climate change is real.... eg Karl Kruszelnicki (LINK.)

We also know that the oldest scientific body in the world, the Royal Society, was forced to change its policy after 43 senior fellows disagreed and said (they were) not representing the views of all of the members. They pushed and the Royal Society issued a new report. (LINK)

All the scientific institutions should run a poll of the view of their members on man-made climate change and publish the results.

Then and only then will we know the true position of these scientific bodies.


Background
Is earth's weather getting more extreme and variable in response to the warming that plucked the planet out of the chilly grip of the Little Ice Age? Climate alarmists claim that it should have been doing so; and in a review of this significant question, Easterling et al. (2000) go even further, stating that data in support of this proposition "would add to the body of evidence that there is a discernible human effect on the climate."

What it means
Hiebl and Hofstatter conclude that concerns about "an increasing number and strength of temperature extremes in terms of deviations from the mean state in the past decades cannot be maintained," according to their study; and, therefore, they state that related "exaggerated statements seem irresponsible."