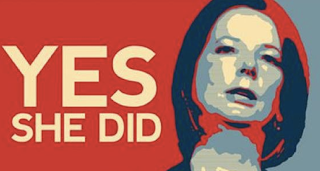 Chris Kenny wrote (in the Australian (link) on November 10) that PM Gillard is hiding behind non-answers. Meanwhile the press and the opposition are upping the push for answers.


THE most telling political development of the past month has been the emergence of the Slater and Gordon affair as a mainstream issue. For months it had been pursued only by this newspaper but has now been taken up by our Fairfax competitors and, more importantly, the Opposition.

Julia Gillard now appears panicked as she refuses to answer forensic questions on the matter in parliament. She stonewalls when it is raised in press conferences


He is incorrect saying "For months it had been pursued only by this newspaper"
This blog was pursuing the matter well before the Australian started investigating, as also was the Kangaroo Court blog (see for eg

However, there would be no one looking into the matter if it wasn't for Michael Smith.

For many revelations go to MichaelSmithNews.com.


In this newspaper, award-winning reporter Hedley Thomas has assiduously investigated the issue, unearthing a series of exclusive reports. His critical breakthrough was revealing the transcript of Gillard's interview with senior law partners during her firm's internal review of AWU matters in 1995.

This confirmed Gillard helped to establish what she described as a "slush fund" and that she had not informed her colleagues or adopted the standard accountability practice of opening a file on the matter. Thomas also revealed that as a result, Gillard's partners lost trust and confidence in her, and she left.

And indeed more of the MSM are enquiring about the matter.

Even the Sydney Morning Pravda Herald has entered the arena:

She was more than happy, when word came that Blewitt wanted to buy an investment property in Melbourne, to help find the right place, to do a freebie on the conveyancing, to sort out finance through her law firm's loan facility and, for good measure, to turn up at the auction with her boyfriend to make sure everything went to plan for the absentee landlord.

Asked at a media conference in August whether, in her many dealings with him over several years, she had ever had reason to find Ralph Blewitt to be a ''shonky'' character, the Prime Minister replied: ''That's a question that no one could answer. Did I have any reason to believe that Mr Blewitt was involved in the kind of conduct that has subsequently come to light? No, I did not.''

Julia Gillard says she has answered all possible questions about her involvement in the Australian Workers Union slush fund scandal in her hour-long August 23 press conference. But, since then, new information has emerged and the Prime Minister’s insistence that all questions have been answered does not pass muster.

Working for law firm Slater & Gordon in the 1990s, Ms Gillard provided legal advice to her then boyfriend, AWU official Bruce Wilson, and AWU official Ralph Blewitt on the establishment of the AWU Workplace Reform Association, which she described as a “slush fund”. Mr Wilson and Mr Blewitt are accused of using the association to defraud the AWU. The Weekend Financial Review reported on a series of outstanding ­questions surrounding the fund and the purchase and ­conveyancing of a Melbourne property bought by Mr Wilson (in the name of Mr Blewitt) in 1993. One relates to whether Ms Gillard was aware of the source of the $67,000 used as a deposit on the house. The Prime Minister stated on August 23 that Mr Blewitt had personally provided the funds to buy the Fitzroy property. ­However, the conveyancing file has revealed that a cheque for more than $67,000 made out on the AWU ­association’s accounts was used as the deposit.


Read more at the AFR (link) 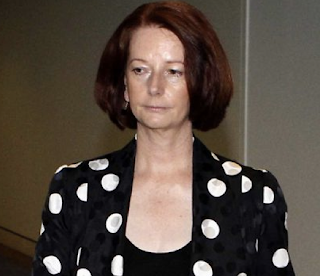 The Melbourne property was bought for $230,000. Mr Wilson used power of attorney to buy it on behalf of Mr Blewitt. The law firm’s file shows that a deposit of $23,000 was paid, and the firm acted as the intermediary for a $150,000 mortgage.

Ms Bishop has already sought to table in Parliament a copy of a cheque for $67,722.30 from the Workplace Reform Association that was used to settle the purchase of the property.

The cheque is made out to “Slater & Gordon Trust Acc” and is drawn on a branch of the Commonwealth Bank in James Street, Northbridge, in Perth.

Read more of Gemma's article at the AFR (link)

The PM does have more questions to amswer!

He recently was interviewed by Alan Jones and a transcipt of that interview has been published in Quadrant on Line under the heading:

Jones: Cambridge has been calling on the one hand for a Royal Commission but then is appointed (to FWA). He was the author of the affidavit when McClelland was the solicitor. Cambridge is now in the union controlled Fair Work Australia, which has delayed the investigation into Thomson and, as I understand it, he has not pursued the Wilson-Gillard matter since.

Smith: That is true. He swore an affidavit with penalty of perjury if falsely sworn. You read it; read what he said about Slater & Gordon, and its role and Ms Gillard was a partner who was involved in this position where she had a conflict of interest having a sexual relationship with the man who headed up her client, the AWU, that was undisclosed to her partners. The Law Council would have a view about the appropriateness of that.

Jones: Did she, as a lawyer, set up accounts into which extorted funds were diverted? This union heavy was going around saying: I want this money, 25 thousand from you and 30 thousand from you in order to get work done. This was 20 years ago, and that money was shoved into another account the AWU would not know about. Did she set up those accounts?

Smith: I know that her handwriting is present. I have had that analysed by the country’s pre-eminent forensic handwriting analyst, Paul Westwood. He is the same guy who helped me out on the Craig Thomson matter, who analysed the hand-writing on the credit card chits, the signature.
I am a layman. I can look at her handwriting, I have a copy here and the handwriting on that form. It is identical. But the forensic analyst tells me it is in all likelihood, balance of probabilities, written by the same person, by her.

For the Quadrant on line article go HERE and for the actual broadcast, there is a link in that report.

Shame on the toadies of the Main Stream Media, the apologists for the Green Gillard Government who, by failing in their duty to report, have helped sweep this dirty business under the carpet.