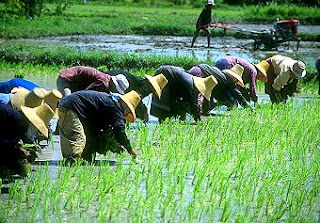 A new study has been published in this week’s edition of Nature Climate Change.

Increased atmospheric CO2 and rising temperatures are expected to affect rice yields and greenhouse-gas (GHG) emissions from rice paddies. This is important, because rice cultivation is one of the largest human-induced sources of the potent GHG methane (CH4) and rice is the world’s second-most produced staple crop

Agriculture is a major anthropogenic source of GHGs, and climate-change concerns have spurred efforts to reduce GHG emissions from agricultural systems. Rice is a staple food for nearly half of the people in the world. Rice paddies account for 11% of the planet’s arable land and are responsible for 10% of human-induced CH4 emissions or 20% of total agricultural CH4 emissions. The global warming potential of GHG emissions from rice systems is roughly four times higher than either wheat or maize.


“Together, higher carbon dioxide concentrations and warmer temperatures predicted for the end of this century will about double the amount of methane emitted per kilo of rice produced,” said Chris van Kessel, professor of plant sciences at UC Davis and co-author of the study, published in this week’s edition of Nature Climate Change. “Because global demand for rice will increase further with a growing world population, our results suggest that without additional measures, the total methane emissions from rice agriculture will strongly increase.”

Hanrahan was right.
Posted by Geoff on October 23, 2012 No comments: