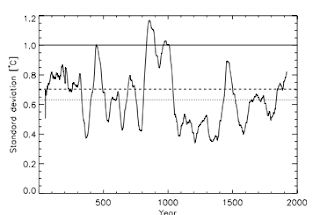 Climate of the Past, the journal of the European Geoscience Union has published a paper "The extra-tropical Northern Hemisphere temperature in the last two millennia: reconstructions of low-frequency variability" by authors B. Christiansen and F. C. Ljungqvist. (Link)


David Whitehouse for the Global Warming policy Foundation sums it up: (link)


The researchers conclude: “The level of warmth during the peak of the MWP (Medieval Warm Period) in the second half of the 10th century, equaling or slightly exceeding the mid-20th century warming, is in agreement with the results from other more recent large-scale multi-proxy temperature reconstructions.”

Ljungqvist et al. also show that, “on centennial time-scales, the MWP is no less homogeneous than the Little Ice Age if all available proxy evidence, including low-resolution records are taken into consideration in order to give a better spatial data coverage.”

In conclusion this impressive piece of research makes a significant contribution to a growing body of evidence that both the global extent of the MWP, and the temperature was similar, or even greater than the Current Warm Period, even though the atmospheric CO2 concentrations today are some 40% greater than they were during the MWP.

Email ThisBlogThis!Share to TwitterShare to FacebookShare to Pinterest
Labels: $50 a tonne, Christiansen and Ljungqvis, Climate of the Past, European Geoscience Union
Newer Posts Older Posts Home
Subscribe to: Posts (Atom)