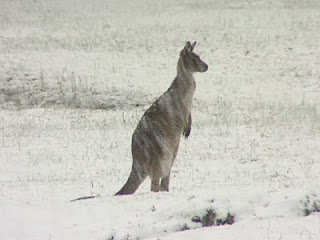 Barely four months into Australia's tax on carbon dioxide, there has been a dramatic drop in temperatures. In Australia we are well into Spring!

For many, the best time to visit Sydney is in the Australian spring. This covers the period from September 1 to November 30. (link)

(Adelaide) Spring occurs from September to November. Temperatures range from 20°C to 25°C and the climatic conditions are perfect for a large number of outdoor activities.  (link)


We can scrap these guides, because, since the introduction of the tax on carbon dioxide, things have changed.

From the Australian: (link)


The mercury in Adelaide dropped to 4.9C, one of the lowest October minimum temperatures on record, and fell as low as 0.4C at Mount Lofty.


Weather Channel presenter Amy Greenbank  said there had been reports of snow down to 900m in parts of Adelaide, while 2cm of snow has fallen at Thredbo in the NSW alpine area.

She said the bulk of the wild weather would be confined to NSW, but the system had also led to plunging temperatures in Victoria, where it was just 11C in Melbourne at 11.30am, and significant rainfall across parts of Queensland.


From Radio 3AW (link) Snow at Mittagong and Goulburn


3AW Breakfast listeners Riad sent through video of snow falling in Mittagong, 85km from Goulburn... in the middle of Spring!


Many listeners around the state woke up this morning to snow falling outside their windows... in October!

Reports of snow started before 6 this morning with a caller on the Hume Highway at Goulburn, and then came in thick and fast from Katoomba, Mt Blackheath, Mt Victoria and Mittagong.


Did the Government decided to retreat from their $23 tonne tax because of this amazing effectiveness of the tax?
Posted by Geoff on October 12, 2012 No comments: