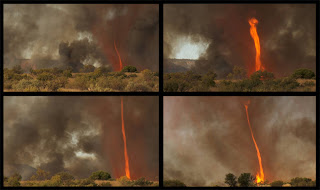 As reported by the Northern Territory News (link)

AN Alice Springs filmmaker has refused to sell footage of a firestorm to former US vice-president Al Gore - to use in Mr Gore's climate presentations - because the event was unrelated to climate change.
Chris Tangey from Alice Springs Film and Television recorded the phenomenon on Curtin Springs Station, 360km southwest of Alice Springs, while scouting locations for a film.

In an email exchange with Mr Gore's office, Tangey said using the footage in a climate-change framework would be "deliberately deceptive".
"I am aware that you may have missed the reporting on the very localised nature of this firestorm," Tangey wrote.
Jill Martin, from Mr Gore's office, said the famed American climate change advocate wanted to use the footage for up to five years in his PowerPoint presentations to live audiences worldwide.