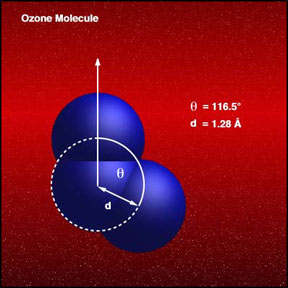 A important paper published today in the Journal of Geophysical Research finds that large quantities of ozone [O3], a "major greenhouse gas," are being produced naturally by an increase in lightning activity "caused by the influx of aerosols from a volcano." According to the authors, "Our findings thus suggest a stronger O3 historical radiative forcing because this link implies lower lightning-generated [nitrous oxide] and lower O3, especially in the upper troposphere, in preindustrial time. Aerosol forcing therefore has a warming component via its effect on O3 production and this component has mostly been ignored in previous studies of climate forcing related to O3 and aerosols." Prior research has shown that large variations in solar UV activity also control ozone production and that ozone levels could be the main driver of recent climate. Once again, natural variability including changes in ozone, solar and volcanic activity have been shown to be important drivers of clmate.

CO2 Science reports on a paper published in Nature Geoscience 5:


Background
In a world where glaciers are believed to be shrinking almost everywhere, the authors note that at the west end of the Himalayan arc, where China, India and Pakistan meet, "an anomalous gain of mass has been suggested for the Karakoram glaciers," citing the findings of Hewitt (2005) - who first wrote about the "Karakoram anomaly" - as well as the subsequent studies of Zemp et al. (2009), Cogley (2011) and Scherler et al. (2011).

The three scientists calculated the regional mass balance of the glaciers between 1999 and 2008 and then supported their findings they write that "recent glacier expansion (Hewitt, 2005) and speed-up over the region (Quincey et al., 2009; Heid and Kaab, 2011) tally with the gain of mass calculated in this study."

What it means
Gardelle et al. conclude by stating that their measurements "confirm an anomalous mass balance in the Karakoram region and indicate that the contribution of Karakoram glaciers to sea-level rise was -0.01 mm/year for the period from 1999 to 2008," or "0.05 mm/year lower than suggested before." As for how this complete change of direction in the perceived mass balance history of the Karakoram glaciers could have occurred, Cogley (2012) writes - in a contemporaneous commentary on the work of Gardelle et al. - that "by a quirk of the atmospheric general circulation that is not understood, more snow is being delivered to the mountain range at present, and less heat," which leads one to wonder if there might well be a whole lot of things that are "not understood" about earth's climate ... by even the most brilliant of the world's scientists.

The same issue of   Nature Geoscience 5  includes another paper under the heading:

Glaciology: No ice lost in the Karakoram (link)