You would think that the alarmists would be cheering. The good news keeps coming.

The US carbon dioxide emissions have declined for four of the last six years.

From the Consumer Energy Report: (Link)


The United State Energy Department announced this week that carbon dioxide emissions resulting from energy production declined in the country in 2011, the third time in four years and fourth time in six years that this has been the case.

The Energy Department measured a 2.4 percent drop in energy-related carbon dioxide emissions last year, most of it due to the slower economy than any “green” measures, though the department’s report did note that energy produced via natural gas increased by 3 percent, while energy produced from coal decreased by 6 percent. (See also: Global Carbon Dioxide Emissions — Facts and Figures)

The planet has been cooling since 1997. (Alarmists give wild rebel yells and champagne corks pop across the planet?)


Global Cooling Since 1997 - The IPCC Global Warming Prediction Due To CO2 Emissions Was Wrong, Spectacularly

The IPCC predicted that global warming would result from increased atmospheric CO2 levels - however, since the beginning of the 1997 Super El Nino, global cooling has been the result.

The RSS satellite global temperature measurements indicate that the 1997-98 Super El Niño started from the low of April 1997. From that point, and all the way through July 2012, the global atmosphere has cooled - a total of 184 months.

Therefore we should be hearing outburst of applause and cheering from the alarmists.

Do you hear them?

Why is it that so many alarmists are ratcheting up their vitriol and hateful rhetoric precisely when U.S. carbon dioxide emissions are rapidly declining? The answer is the alarmists are motivated more by a desire to reshape society into a government-centered model than they are interested in reducing carbon dioxide emissions. Emissions are rapidly declining, yet money and power remains largely with the people rather than the government. Accordingly, activists ratchet up their hateful rhetoric. 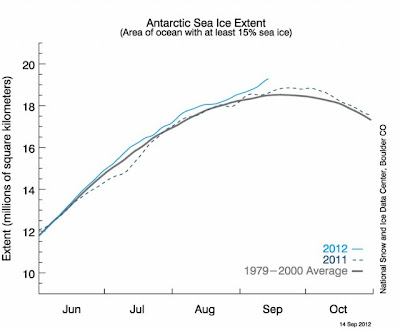 That’s ½ million square kilometers more ice than average – Where are the breathless headlines?