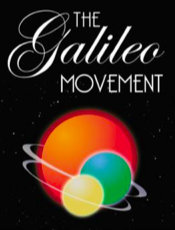 The Galileo Movement is disappointed that the fabricated smear originating from the Sydney Morning Herald (SMH) that The Galileo Movement is anti-Semitic is still being reported as fact. To prevent this ridiculous, vile claim being spread further, we'd like to highlight a few facts and expose the techniques and the dishonest tactics used by people too lazy to do real research, who wish to silence us by calling us anti-Semitic.

Firstly, the claims are preposterous. Both Directors of the Galileo Movement have a strong Jewish heritage, including John's wife who is a Holocaust survivor and Case’s mother, most of whose family were murdered for being Jewish.

Secondly, the Galileo Movement has never spoken or published anything that is anti-Semitic.

The non-profit group of unpaid volunteers have a single, publicly stated purpose – to remove the unnecessary and damaging "Carbon Dioxide Tax", its derivatives and the means by which such negative, economic and socially destructive legislation may be reintroduced.

The Galileo Movement promotes science and the scientific method. Yet in order to distract people from these inconvenient facts which they obviously have no answer to, some people attack the messenger, rather than discuss the science.

The method of censor through denigration is further discussed here.

The process of trying to discredit us began with Sydney Morning Herald reporter Ben Cubby, who contacted us to ask our opinion of the Muller et al (alarmist) and Watts et al (sceptic) papers which were released the day before. The recording of the interview with our Project Leader Malcolm Roberts, presents a clear and precise scientific explanation of the problems with Muller’s paper. Additionally, he spoke at length outlining the motives of those supporting AGW including, academics feeding off taxpayer grants, politicians seeking political benefit and bankers harvesting carbon credits. Of the 48 minute interview, Cubby strangely chose to virtually ignore almost all of the science and facts (plus mention of the Watts et al paper) and instead chose to highlight the banking industries comment.

The smear was created when Mike Carlton, also from the SMH, with no proof or without contacting us, linked a discussion on banks making profits from Carbon Trading to "In Rightspeak, understand, that's code for the Great Jewish Conspiracy”. Afterwards, others began repeating this fabricated connection as if it were a proven, undoubtedly hoping to stop others listening to our science based critique.

Malcolm Roberts, our Project Leader, used the term ‘banking families’ during the interview to describe the major banking institutions that plan to profit from the trading and financing of CO2 abatement.

Neither Malcolm, nor ourselves, were aware that using the term ‘family’, when referring to banks, could in any context be anti-Semitic. We submit that any reasonable person would take the meaning at face value. Finding non-existent meanings and hidden codes are the tricks our opponents use. They revert to these tired and transparent techniques to desperately avoid discussing the science.

How could Mike Carlton’s ill-informed opinion find its way into a mainstream Australian newspaper? Why did a reporter like Ben Cubby ignore basic science?

Is it bias or groupthink?

We have a few ideas for the Sydney Morning Herald that they might to report on. It’s readers will find these both interesting and also puzzling as to why they have not heard such facts previously. Let’s start with:

The Swiss Energy and Climate summit was held in Bern on 12-14 September. As part of the
proceedings, there was a debate between Professor Fritz Vahrenholt (see here) and Professor Thomas Stocker on
Ist die Sonne schuld an der Klimaerwärmung which I translate as "Is the Sun to blame for Global Warming."

Pierre Gosselin on his blog NoTrickZone writes of the debate:

Needless to say the atmosphere was electrified, with an audience of almost 400. Unfortunately there still is no video of this debate, but the online Berner Zeitung daily (BZ) of Bern wrote up a report, and yes, they too had to concede that skeptic Vahrenholt won the debate.

The BZ called Vahrenholt “rhetorically tough” and wrote he needed “only 10 seconds to warm up his argumentation machinery”.

Some of the Comments to the post are worth recording:


Isn’t it funny how a new hypothesis (Svensmark) that explains events better than an older one (CO2AGW) sticks with “laymen”.

We gotta find better ways to re-educate them it seems. Maybe send a free copy of Michael Mann’s book to everyone.


Vahrenholt is emerging as a star of the climate sceptic movement. He’s spoken several times in Brussels — the EU’s Heart of Darkness. It’s a delicious irony that he has a long track record as a German green activist and a leading player in renewable energy.