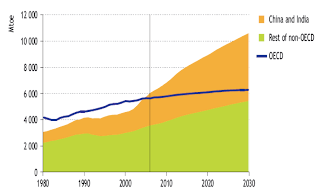 Recently NCTCS blog reported that the Australian opposition's Climate Con Shadow Greg Hunt has given the nod to Kyoto 2 (Link), while the Government's Climate Con Commissioner Greg Combet, as reported by Reuters (Link,) is sitting on the fence.


Earlier this month Australia's main opposition party which is tipped to win the country's next general election said it would not object to the country taking on another legal target to cut emissions under the Kyoto Protocol, putting pressure on the government to sign up.

A spokesperson for Australia's climate change minister said the country had not yet made a decision, preferring instead to wait to see how talks advance on the new global treaty, the bare bones of which were agreed at last year's climate talks in Durban.

"The Australian government will take a decision on the Kyoto Protocol second commitment period at an appropriate time."

Although we have persistently pointed out that temperature rise precedes rise in atmospheric CO2 (and not the other way around as claimed by the falsified AGW hypothesis) and most recently with the peer reviewed paper of Humlum et al, for the sake of fantasy let's assume the pseudo-science of the IPCC/ClimateGate Conmen is correct. Let's assume that carbon dioxide is not innocent but is in fantasy guilty.

Looking at the graph above (from a paper by Carlo Carraro - President, University of Venice; Vice Chair, IPCC WG III  LINK) most of the increased emissions come from China, India and non OECD countries. (Australia would probably equate to the bottom border of the graph frame.)

If - emphasise IF - carbon (dioxide) was guilty, we are doomed unless China, India and the non-OECD countries sign Kyoto 2.

Back in Bangkok, it looks like another failure for the Climate Hoaxers. As reported by Business Green (link):


Fears are mounting that the latest round of international climate talks could once again end in deadlock, as diplomats gathered in Bangkok reportedly clashed on a number of different fronts.

The latest round of talks are meant to prepare the ground for the next major climate change summit in Doha, Qatar, at the end of the year, where countries are expected to agree an extension to the Kyoto Protocol before it lapses at the end of the year and the roadmap to deliver a new legally-binding treaty, which is scheduled to be agreed by 2015 and brought into effect by 2020.


Almost 50 of the world's poorest nations said pledges made by rich countries to provide funds to help them adapt to a warmer planet risk being overlooked as U.N. negotiations over a global climate pact to start in 2020 got underway in Bangkok on Thursday.

The group of mostly African nations said that ill-fated talks launched in 2007 to find a successor to the Kyoto Protocol must not end without richer nations pledging financial aid to help them cope with rising sea levels cause by climate change.

The warming has stalled and, although atmospheric CO2 continues to rise (currently around 394ppmv) there has been no global temperature increase in 15 years.

Sea level Rise? Previously quoted at 2-3mm per year - a very insignificant figure - do your own extension for 100 years. However, as reported by Joanne Nova via Frank Lanser (link):


What astonished me was the sea levels first recorded by the Topex Poseidon satellite array showed virtually no rise at all from 1993-2001. Surely not, I thought.

I asked sea-level expert Nils-Axel Morner, and he confirmed: “Yes, it is as bad as that.“  Now, given that Envisat (the European satellite) showed no rise from 2003-2011 (until it was adjusted) that means we have almost 20 years of raw satellite data showing very little rise.

No temperature rise, no sea level rise, no Kyoto 2, no problem!