Jonathan DuHamel in an opinion piece for the Tucson Citizen writes:

NCTCS blog has recently written of Arctic sea ice:-
DuHamel continues (confirming that we both use similar sources)


The NSIDC would have us believe that the satellite era began in 1979, but it actually began in 1967. Below is a graph from Steve Goddard with data from IPCC 1990 report showing that sea ice was much lower prior to 1979 which happened to be the year of largest sea ice extent since 1967. We should also note that extent of Arctic sea ice is cyclic. Setting records depends on where you start counting. 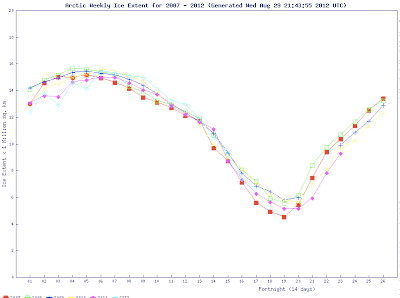 A very well written letter by Peter Bishop of  "Wootton," Scone appeared in the letters to the editor of the Land on Thursday 23 August, 2012.

NO TIME FOR COUNCIL

Nine rural shires in NSW are not holding elections this year because they have either not enough or the bare minimum of candidates.  Life on the land is increasingly hard and fewer farmers can spare the time for local government.

But 8 years ago Merriwa, Scone and Murrurundi Shires were amalgamated into the Upper Hunter Shire.  Merriwa lost the valuable litter corner that contained Ulan Coalmine but kept all its Council’s staff.  Murrurundi transferred more or less half its land and half its staff to the Northern Council.

The carrot of economies of scale was dangled by State and Local authorities when promoting this amalgamation.  For example, if three different people were doing the same job in different Shires, then maybe one person could do that job in the amalgamated shire.  The State Government then legislated against the very economies of scale it had promoted, introducing “employment protection” – in local government areas with populations under 5,000 no local government jobs could be lost – indefinitely.

So now the new Upper Hunter Shire had the same number of staff as the three previous Councils had before (less the Murrurundi transfers), and three sets of council chambers.

So what did they do next?

Of course they did.  But there is more.

Farmland still produces more than half the rates in the general fund of the Upper Hunter Shire - $4.5m out of $8.4m.  Council has increased this by the IPART limit of 3.6% this year while farm incomes are recovering from several years of drought and the high Australian dollar works against farm exports.  The general fund rate pool of $8.4m no longer covers the wages and salaries of Council staff which come to $12.967m.

Even with the addition of annual charges, the rate pool only rises to $12.7m.  At a time when dairy farmers are going out backwards, with wool and meat producers not far behind, the Upper Hunter Shire Council has proposed a rate rise of 10pc for the next year – 3 times the IPART limit.

The Upper Hunter Shire Council is becoming a Frankenstein monster, consuming the very ratepayers it is supposed to serve.  It’s time someone pulled the plug.

Reports from Germany indicate that Germany is turning its back on the renewable energy of Wind and solar and is going back to coal fired power stations.

From Nuclear Physicist Kelvin Kemm writing for THE MORAL LIBERAL


It is amazing how biased the international media is when it comes to reporting on energy generation, specifically electricity.

In mid-August, Germany opened a new 2200MW coal-fired power station near Cologne, and virtually not a word has been said about it. This dearth of reporting is even more surprising when one considers that Germany has said building new coal plants is necessary because electricity produced by wind and solar has turned out to be unaffordably expensive and unreliable.

In a deteriorating economic situation, Germany’s new environment minister, Peter Altmaier, who is as politically close to Chancellor Angela Merkel as it gets, has underlined time and again the importance of not further harming Europe’s – and Germany’s – economy by increasing the cost of electricity.


Here is the real cruncher. Not only has Germany just opened one new coal-fired power station, they have approved twenty three (23) more!


He is also worried that his country could become dependent on foreign imports of electricity, the mainstay of its industrial sector. To avoid that risk, Altmaier has given the green light to build twenty-three new coal-fired plants, which are currently under construction.

Der Spiegel lists the reasons why Germany has made this major about face. (link) Although Angela Merkel had announced in June 2011 that her "government decided that by 2020 renewables would make up a 35 percent share of the energy mix," since then "the situation has changed dramatically."


Now a new set of problems have cropped up, and quickly. The fast pace into the renewables future has meant that German consumers are faced with skyrocketing electricity bills and that the country's energy grid has suddenly become outdated. Indeed, Environment Minister Peter Altmaier now finds himself in the awkward position of having to put the brakes on the country's energy revolution.

Due to the inherent intermittent nature of wind, their wind power system was designed for an assumed 30% load factor in the first place. That means that they hoped to get a mere 30% of the installed capacity – versus some 85-90% for coal, natural gas, nuclear and hydroelectric facilities. That means that, when they build 3,000MW of wind power, they expect to actually get merely 900MW, because the wind does not always blow at the required speeds. But in reality, after ten years, they have discovered that they are actually getting only half of what they had optimistically, and irrationally, hoped for: a measly 16.3 percent.

Even worse, after spending billions of Euros on subsidies, Germany’s total combined solar facilities have contributed a miserly, imperceptible 0.084% of Germany’s electricity over the last 22 years. That is not even one-tenth of one percent.


As formerly eco-evangelist Germany has demonstrated, countries cannot afford to have national energy policy molded by movies like “Fuel” and “An Inconvenient Truth.” Their policies – and their future – need to be based on genuine truth and honest reality.