A Cunning Stunt! (and UPDATE)

The increase in the annual refugee intake — to 20,000 from 13,700, the biggest increase in 30 years — caps two weeks of bruising debate after the release of an expert report on immigration commissioned by the Australian government.

This was made necessary because our migrant intake has been flooded with country-seeking boat people (not asylum seekers as they have already passed through countries where they would be granted asylum). True asylum seekers do not get a look-in because of this flood of boat people.

The PM then hi-jacked the Press Conference to "Answer" the questions on the AWU scandal. This caught the Press Gallery left-footed not having done their home work. It also meant that journalists following the AWU scandal were not in attendance. No Hedley Thomas, No Michael Smith, No Andrew Bolt etc etc.

Even so, it still left questions unanswered. This blog has sent her a list of questions (Link) but does not expect an answer.


The questions now being asked about Gillard's conduct include:

■Whether — as Styant-Browne asserts — Gillard knew, or learnt, that the association had not been set up for the purpose of workplace safety as asserted in the legal paperwork, but rather as a re-election or "slush" fund.

■Why she did not open a file on the association. Was there no contract for payment, no paperwork that could be reviewed or used by other lawyers who might take over the work in her absence?

■How could the association be set up without the knowledge of the national executive of the AWU? Did the law firm not ask to see a resolution or approval from the union executive authorising its establishment?

These questions and more are likely to be raised in a legal opinion now being drafted by Melbourne QC Peter Faris.

During her hijacked Press Conference, the PM avoided mentioning  completely upright Michael Smith's continuing probe into her probity. (See eg HERE and HERE) Michael has gathered so much documentation that he will soon need a semi-trailer to cart it around with him.

Pickering's Response is his column entitled (and title shamelessly pinched above..)


WHAT A CUNNING STUNT?  (Link)

Well done, Julia. No, seriously, I mean that. Shot me down in flames you did. I really felt like crawling under a rock after that impromptu performance.

That was so brilliantly cunning to pounce on a typo in “The Australian” in order to pull on a Press conference claiming defamation of all things. What was the typo, “trust” instead of “slush”, was it?


1. You said yesterday that you paid for your renovations. Why then did you previously say you couldn’t be certain that you did?

2. You said you believed it was “slush fund”. As an industrial Lawyer did you seriously not know a “slush fund” could in no way be an Association?

3. If you believed it was a “slush fund” why did you print on the Application Form that its intended role was to facilitate “worker safety and training”?

4. Is it true that the four people present in the room when you drew up this document were yourself, Ralph Blewitt, Bruce Wilson and Senior Equity Partner, Bernard Murphy?

5. An Association requires, by law, to have at least five members. Who did you nominate?

6. When you drew up a power of attorney for your friend Bruce Wilson to act for Ralph Blewitt, why did you not inform Mr Blewitt of the mortgage, now in his name, subsequent to going to buy the house with Mr Wilson?

7. When conducting the firm’s conveyancing (again pro bono) for the purchase and sale of the Kerr Street house, did you take note of where the money was coming from and going to?

8. Why were the Association, the bank account, the purchase and sale of the house and the mortgage kept secret from the AWU.

9. How could the purchase of a house be consistent with either a “slush fund” or “worker safety and training”?

10. Why did you attempt to deliberately mislead the WA Commissioner for Corporate Affairs when setting up this Association?

11. Why did you not inform your firm’s boss or your firm’s client, the AWU, of any of your actions?

12. Do you agree it is your handwriting on the fraudulent form?

13. When the AWU discovered the fraud, why did that union’s boss, Ian Cambridge, immediately sack Slater & Gordon and call for a Royal Commission?

14. Why were you asked, by your employer, for a taped interview?

15. After you were dismissed why did you not renew your Practising Certificate? Did you beieve you would be unable to practise again?

16. Why is the six months subsequent to your dismissal missing from your CV?

17. Why did your boss, Styant-Browne say, and I quote: "...the company took a very serious view of these and other matters and accepted her resignation"?

20 Why was Senior Equity Partner Bernard Murphy asked to make a settlement and leave at the same time as yourself?

21 When your ex-Attorney General Rob McClelland stated in Parliament, “...a third party may have benefitted from...”, was this “third party” he referred to, you?

22 What did you mean by, “I was treated shabbily”, when you were asked to leave the firm?

23 You refuse to make a statement in the House. Is it true you realise it would be illegal to lie when so doing?

24 And finally Ms Gillard, how can you profess to be a champion of the working class when you have clearly been complicit, with your boyfriend, in stealing their money?
Now, I don’t expect you to answer all of these, just a few would be good... with the rest you can perform your normal stunt of evasion.

It was really good the way you gave absolutely no notice to the Press who were so obviously caught on the hop. No time for Editors to tell correspondents what they wanted asked! Wow, only two questions of any substance and you dodged them so beautifully.
I was impressed the way you praised the Press as being the cream of the country’s journalists. Golly, only two tired old Lefties, Grattan and Bongiorno plus a few snotty nosed cadets were present.

Pickering's Posts latest:  Paul Zanetti's defence of Larry -"Should Julia be treated Differently...".(Link) (Paul is Editor of the Pickering Pages)


And from another whom our PM might tag a ''misogynist nut job on the internet" Andrew Bolt: (link)


.......Julia Gillard fiery defence of her role in the AWU scandal was brilliant politically and theatrically.

It was masterly how she made the most insignificant error in a minor colour story in The Australian seem a massive error which discredited weeks and many pages of meticulously accurate coverage.

It was terrific how she made out the controversy started with the (redacted) blog of Larry Pickering, with a base media just recycling his smelly wares, when serious journalists, politicians, lawyers and unionists have raised serious questions about this for a long time.

It was effective, albeit a little desperate, to play the sexism card, portraying the criticism of her as misogynist and sexist - and then to play the woman betrayed. Sensational, and you can see how that will dovetail into an attack on Tony Abbott.

Again, it was clever tactically to make The Australian a villain, to fit in with the wicked Murdoch media narrative to rally the Left. Never mind that 2UE, 3AW, the Financial Review and, belatedly, Sydney Morning Herald were also demanding answers from her.

And it was a masterstroke to spring the press conference on journalists who thought they were there for an announcement on the new refugee intake, and then stand there until the questions from the largely unprepared petered out in the only opportunity Gillard says she’ll ever give them.


TWENTY years ago, Julia Gillard used her expertise as a lawyer to help create a "slush fund" for her boyfriend and his mate in the Australian Workers Union to draw on to fund their own elections.


"Slush fund" is not newspaper hyperbole. It is how the Prime Minister described it when she gave a long explanation of her own conduct during a tape-recorded 1995 interview, part of an internal probe by Peter Gordon, her then boss at the Slater & Gordon law firm

After discussing Ms Gillard's use of the term "slush fund," he continues:


The "slush fund" that Gillard had created three years earlier was a legal entity, an incorporated body, for the purpose of raising and holding funds for the re-election of union officials. It was designed to assist the personal advancement in the union of Gillard's then boyfriend, Bruce Wilson, who was then the leader of the West Australian branch of the Australian Workers Union. Wilson needed "slush", or money, to fund a forthcoming election that he expected to contest.

Gillard's boyfriend, and his friend, union sidekick and bagman Ralph Blewitt, needed a name for this legal entity. They could have called it the AWU re-election fund. Or the AWU vote-for-a-new-leader fund.

Instead, it was called the AWU Workplace Reform Association, a title completely at odds with its actual purpose. The written objects, or rules, for the association do not disclose the true purpose is to fund elections for union officials.

and on the Press Gallery questions:


The question that might have elicited the devil in this detail was not asked by the press gallery yesterday, but it revolves around a simple point. The reality is that if any of the documents lodged with the West Australian government agency had disclosed that the association's true purpose was as a "slush fund" to help in the election of union officials, it would not have been registered.

In her answers yesterday, the Prime Minister deftly moved the goalposts. It was a legalistic answer, a duck-and-weave that takes a minute or two to see as such. 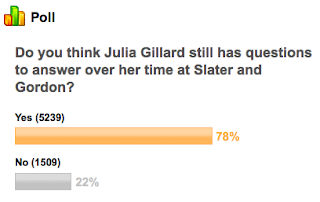