by Anthony Cox
Also published at On Line Opinion

There seems to be 2 prongs to this wedge strategy. The first is described by Gillard as “gold-plating” of the electrical network. Gillard compares the electricity supply as being the equivalent to a 10 lane highway when only a 2 lane one is required to meet rare peak demand situations.

The second prong is being pushed by her minister Martin Ferguson who is demanding that the states privatise the electricity suppliers.

Both these aspects of the government’s strategy are fraught with political risks and contain considerable irony given the ALP’s past policies.

Peak demand, the 10 lane part of the energy supply, is indeed occasional but crucial to lifestyle patterns; daily peak times correspond with departure and return to homes, and seasonally correlate with temperature extremes. Australians are already using much less electricity per capita; if peak consumption is to decline further either major adjustments to lifestyle will be required [ie being colder or hotter] or, alternatively, brownouts or even blackouts will occur, something Gillard has said will not happen but which have been predicted by the AEMO and the AER.

In terms of how the 10 lane highway came to be built in the first place Gillard has overlooked the person who was most responsible for the construction of the electricity highway, ALP stalwart, Bernie Riordan; as Professor Sinclair Davidson notes:

The gold plating she is talking about has its genesis in a union campaign started a decade ago by a bloke Gillard recently appointed to a $350,00-a-year job with Fair Work Australia – former electrical union boss in NSW Bernie Riordan.

Riordan was the man who in 2004 forced the Bob Carr Labor government to impose the very reliability standards that Gillard is now claiming are responsible for the price gouging of Sydney families.

Former NSW Labor energy and planning minister in the Carr and Iemma governments, Frank Sartor, admits as much in his book The Fog on the Hill – claiming that because of Riordan’s lobbying he increased the reliability standards in NSW to prevent power shortages to consumers.

This followed Riordan’s first successful campaign against electricity reform in NSW, when he was instrumental in blocking Carr’s attempt to privatise in 1998.

Ferguson’s quest to privatise also contradicts previous Union opposition not only from people like Riordan but the current NSW state opposition leader John Robertson, who vehemently opposed privatisation when he was the leader of the ETU, and still opposes it.

This political maneuvering does not address the primary issue, which is are the electricity price increases which have already happened due to delayed and expensive infrastructure investment or the impact of the Carbon tax?

Electricity prices in NSW have risen by 69% over the last 4 years, a rise which Gillard claims had nothing to do with the Carbon tax. The argument seems to be that since the Carbon tax only began on the 1st July 2012 rises which occurred before then cannot be blamed on it.

This is creative accounting rather than a sound position. The Carbon tax is a tax designed to reduce the production of CO2 emissions from the burning of fossil fuels. That mission has more than the Carbon tax in its armoury. For instance the Renewable Energy Target [RET] legislation was introduced by the Howard government in 2000 and refined and magnified by both the Rudd and Gillard governments. The lucrative subsidies provided by the Clean Energy Finance Corporation [CEFC] and the Australian Renewable Energy Agency [ARENA] are in the process of providing over $13 billion to wind, solar, geothermal and wave energy start-up programs. Those subsidies and other generous incentives to renewable energy are provided in the context of the RET’s mandating that 20% of Australia’s electricity should come from renewable by 2020.

Green energy is much more expensive than fossils and even nuclear because green energy requires fossil fuel or nuclear to continue running as a backup. In addition, despite Gillard’s declaration that it is ‘gold-plating’ to run an electricity network for occasional peaks the fact is it is always peak in a modern electricity network. This can be shown by seasonal graphs of summer and winter consumption. It is clear that there are daily peaks above the base load or average electricity use. Renewable energy cannot cater for either the base load or the daily peaks in demand and it is misleading to say that it is a waste for an electricity system to cater for peaks in demand.

The only way renewable energy can cater for electricity use is for the peaks to disappear and the base load to drastically decline. A green energy advocacy group, Beyond Zero Emissions [BZE] devised an energy plan to supply all electricity from green energy by 2020. A critique of BZE’s plan was undertaken by professor Barry Brooks and engineers Peter Lang and Martin Nicholson; they found BZE’s plan would necessitate a reduction in electricity demand of almost 60% and cost up to $4.1 trillion. On a pro rata basis a 20% reduction as mandated by the RET would cost only 20% of that, or about $800 billion and require only a 12% reduction in electricity use!

Another example of the impact of the RET and its spinoff alternative energy schemes’ impact on electricity prices before the Carbon tax was introduced is the NSW solar feed in tariff rebate system.

The NSW scheme was introduced by the then ALP minister John Robertson who claimed it would cost $362 million; by the time the Keneally government reduced the 60c per hour rebate to 20c the scheme was estimated to be heading towards a cost of almost $4 billion. Even after the O’Farrell government further reduced payments to the solar panel owners, the scheme is still likely to cost over $2 billion and cost electricity users an extra $140 per annum.

It is plain that infrastructure costs to do with mitigating CO2 emissions and developing green energy have been responsible for a considerable portion of the 69% increase in electricity increases before the Carbon tax was introduced. Since these measures are part of the same program as the Carbon tax it seems unreasonable to claim that the Carbon tax has not been specifically responsible for these increases.

Exactly how much of the ‘infrastructure’ costs already incurred, as compared with those costs to be incurred in the future, are due to the Carbon tax and associated anti-AGW policies is a matter of conjecture. Certainly some necessary infrastructure upgrading was and still remains necessary as Tom Parry, Chairman of the AEMO, notes. But increasingly, if the RET remains in place, which is likely since the Coalition supports the RET, then more and more infrastructure cost will be produced by the construction of the various wind, solar, geothermal, wave and other renewable energy installations, and the extra ‘poles and wires’ necessary to hook them into the grid.

Even the government’s information is lacking in specific or correct information about the breakup between necessary infrastructure work on the existing fossils and ‘new’ infrastructure work to introduce the renewable into the system. However, Professor Davidson has produced a graph of the 4 main categories of costs to do with the electricity supply from the government’s proposed brochure to be supplied to all households with their next power bill. 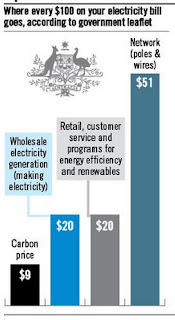 From this it can be seen that measures to do with either directly dealing with AGW, the Carbon” price”, or indirectly, “Retail, customer service and programs for energy efficiency and renewable” of the sort run by the CEFC and ARENA and solar feed in tariffs, as described above will cost $29 of every $100 spent on electricity.

The “poles and wires” ‘infrastructure’ column, however, is where the main costs for electricity users will come from. Gillard is relying on her message being that ALL that $51 will be due to State ‘gold plating’ and nothing to do with the RET and other incentives to increase renewable power.
Posted by Geoff on August 16, 2012 No comments:

Two years ago, when our PM Gillard said: "There will be no carbon tax under the government I lead", this blog thought that she would not survive in office long enough to bring it in the tax. If she had lost office, it would not be a lie.

However it is now two years on and it did become a lie. A whopping big lie that made the difference between losing the election and just scraping in with the votes of independents. Independent members of the House of Representatives who do not represent the majority view of their electorates.

Deputy Prime Minister Swan also lied to the Australian people. Will you be just as hysterical after the NEXT election, Mr Swan?