A new study, published in Scientific American (link) suggests that certain types of the energy-saving lightbulbs can become damaged and then may hurt skin cells.


The curlicue compact fluorescent lamps (CFLs) oft touted as an Earth-friendly alternative to standard incandescent bulbs may cause skin damage, according to a new study by researchers at Stony Brook University.

The bulbs are already known to pose hazards from using mercury, a toxic element, though in very small quantities, as lighting manufacturers are quick to point out.

Here is the sting in the tail of the study:


Now researchers have found that ultraviolet radiation seeping through CFLs may damage skin cells. Miriam Rafailovich, a professor of materials science and engineering at Stony Brook, led the research after reading an article in an Israeli newspaper that reported a spike in skin cancer on a communal farm when residents switched to fluorescent bulbs.

"In the past two years some disturbing reports have surfaced mostly in the European Union literature, which indicate that exposure to CFL bulbs might be responsible for exacerbating certain skin conditions, such as photodermatoses and skin cancer in humans," says the paper, published last month in the journal Photochemistry and Photobiology.


Using CFL bulbs from different manufacturers purchased from retailers on Long Island, the team exposed cultured skin cells in a petri dish to the bulbs mounted in a desk lamp from different distances for varying periods. The team measured how much UV light was emitted and then assessed how the cells responded.

"All of them had some [UV emissions], but some were a lot worse than others," Rafailovich said of the bulbs.

Compact fluorescent light (CFL) bulbs can provide the same amount of lumens as incandescent light bulbs, using one quarter of the energy. Recently, CFL exposure was found to exacerbate existing skin conditions; however, the effects of CFL exposure on healthy skin tissue have not been thoroughly investigated. In this study, we studied the effects of exposure to CFL illumination on healthy human skin tissue cells (fibroblasts and keratinocytes). Cells exposed to CFLs exhibited a decrease in the proliferation rate, a significant increase in the production of reactive oxygen species, and a decrease in their ability to contract collagen. Measurements of UV emissions from these bulbs found significant levels of UVC and UVA (mercury [Hg] emission lines), which appeared to originate from cracks in the phosphor coatings, present in all bulbs studied. The response of the cells to the CFLs was consistent with damage from UV radiation, which was further enhanced when low dosages of TiO2 nanoparticles (NPs), normally used for UV absorption, were added prior to exposure. No effect on cells, with or without TiO2 NPs, was observed when they were exposed to incandescent light of the same intensity. 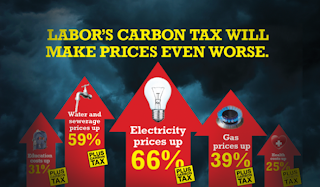 "We are finding that ordinary supermarkets like the local IGA may be up for up to $15,000 on the carbon tax alone if they have to re-gas their giant refrigeration system,'' Mr Goodwin said. "Somehow these guys are going to have find ways to cover these extra costs.''

Image above is from the Liberal Party who have promised to reverse Labor's Carbon (dioxide) Tax policy. As yet, though, the Liberals have not ruled out some form of Emissions Trading Scheme. They also believe in extremely costly and unreliable Renewable Energy. The only party that is against any form of tax or trading schemes is the NO CARBON TAX Climate Sceptics party.


Queensland Energy Minister Mark McArdle seized on the bill as an transparent example of how the carbon tax impacted commercial electricity bills.

"For most domestic customers the price of the carbon tax is hidden in the total cost of the electricity tariff,'' Mr McArdle said. "In the case of market contracts, such as this, each of the components that make up a bill is clearly identified.

"It shows that off-peak energy is attracting an 80 per cent increase directly related to the carbon tax.''