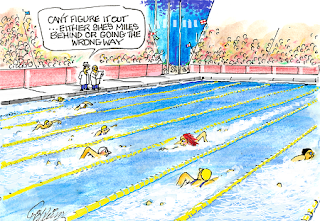 Come clean or come get me, you thieving, degenerate shysters!
Posted by Geoff on July 31, 2012 1 comment:

Graphene is an allotrope of carbon. Its structure is one-atom-thick planar sheets of sp2-bonded carbon atoms that are densely packed in a honeycomb crystal lattice.[1]  Source Wikipedia

The availability of fresh water is dwindling in many parts of the world, a problem that is expected to grow with populations. One promising source of potable water is the world's virtually limitless supply of seawater, but so far desalination technology has been too expensive for widespread use.

Now, MIT researchers have come up with a new approach using a different kind of filtration material: sheets of graphene, a one-atom-thick form of the element carbon, which they say can be far more efficient and possibly less expensive than existing desalination systems.

Seems like a promising idea......but wait, graphene is an allotrope of the dreaded "pollutant" carbon.

They apply a new methodology which makes allowances for every possible interfering factor such as proximity to heat sources or concrete,  asphalt, runways, tarmac and buildings, area weighted and distance weighted, and quality of equipment and maitenance. They apply these to thirty years of US temperature records from 1979 to 2008.


These factors, combined with station siting issues, have led to a spurious doubling of U.S. mean temperature trends in the 30 year data period covered by the study from 1979 – 2008.

Other findings include, but are not limited to:

Professor Illaniaov shows that the current method  of assessing Russian weather stations exaggerates the few (only 4) stations with records before 1859 and impose the urban heating from these stations on the whole set, however large. Since Russia has 11.5% of the total land area of the world.it has a large influence on global figures, which are themselves affected by a similar error..


Sustainability is impossible. There are only two directions; forward and backward.
Posted by Geoff on July 31, 2012 No comments:

The BEST of advice: Don't live in the PAST


The Sydney Morning Herald has an article today ( reprinted from the New York Times):(LINK)


How I saw past the hot air on climate (LINK)

Three years ago, I identified problems in previous climate studies that, in my mind, threw doubt on the very existence of global warming.

Our results show that the average temperature of the Earth's land has risen by about 1.5 degrees Celsius over the past 250 years, including an increase of five-sixths of one degree over the past 50 years. Moreover, it appears likely that essentially all of this rise is from humans' emission of greenhouse gases.

The trouble is in his first three words ~ Three years ago - Richard is living in the past. Even in the past, co-author of his paper,  Judith  Curry, an American climatologist and chair of the School of Earth and Atmospheric Sciences at the Georgia Institute of Technology, accused him "of  trying to mislead the public by hiding the fact that BEST’s research shows global warming has stopped."(LINK)
However, a new pre-print paper has changed all that (LINK)
Roger Pielke Snr writes: (LINK)

This paper is a game changer, in my view, with respect to the use of the land surface temperature anomalies as part of the diagnosis of global warming.

In direct contradiction to Richard Muller’s BEST study,  the new Watts et al 2012 paper has very effectively shown that a substantive warm bias exists even in the mean temperature trends.  This type of bias certainly exists throughout the Global Historical Climate Network, as well as what Anthony has documented for the US Historical Climate Reference Network.


(Muller's) latest BEST claims are, in my view, an embarrassment.

Let's not forget that, although his paper has been floating around in the scientific arena,


Muller's study has not yet been published in a peer-reviewed scientific journal, but he says he plans to do so at some point.

Assuming that no major problems are found, the pieces of the jigsaw fit and pass the common sense test. Yes, hot air rises off concrete.

You don’t need a PhD to know that thermometers placed in car parks are not measuring global warming.