Steffen: AGW and LIES.
by NCTCS Secretary Anthony Cox
Professor Will Steffen is part of the road show which is the Climate Commission. This is a government funded talk-fest which travels around telling people that the world is going to end.

It is reminiscent of Ray Bradbury‘s

Something Wicked This Way Comes;

certainly Steffen is ‘dark’ about humanity’s prospects. Tom Quirk and John Mclean have both written accounts of evenings spent under the spell of the Climate Commission. Their accounts make the events sound like revivalist meetings with doom and gloom being offered unless the ‘snake-oil’ on sale is taken by the sinning masses. 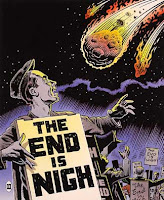 The Climate Commission reminds me of those men who use to stand on street corners and prophesise Biblical sourced catastrophes. This is probably because the AGW concept is very like the Eden myth; a time of natural harmony until Mankind upsets the applecart by taking knowledge in the form of using fossil fuels and polluting pristine nature. Steffen and ilk are the equivalent of stern faced priests issuing repent edicts.

Flannery is Steffen’s fellow spruiker. Flannery is a joke; a joke at the expense of the Australian public with his failed predictions for which he gets $180,000 PA, his sponsorship by Panasonic, his support of dud green energy projects which have sucked up $90 million of taxpayers’ money, his love affair with Gaia, whatever that is, his rabbiting on about sea level rise while maintaining a week-ender by the sea which seems to have upset the locals and various ‘shock-jocks’ and more predictions of all sorts of problems for the punters in the Western Suburbs, which is a long way from the sea and Flannery’s week-ender.                 (Ed: See also Flannery's Failed Fable  - LINK)

Is the fashionably stubbled Steffen any better?  He is better credentialed than Flannery with degrees and a PhD related to AGW. But he is prone to fanciful notions such as the Anthropocene, which, with its negative connotations, would seem to contradict the Gaia prophecy Flannery is fond of making.

Steffen is also fond of litigating against humanity for its crimes against nature; like Flannery Steffen appears to approve of the crime of Ecocide, which Flannery describes as: “the heedless or deliberate destruction of the environment”. This is seriously weird and pretentious.

It is also pathological in a misanthropic way which leads to an assumption that nature would be better off without humanity. I wonder where Steffen and Flannery stand on that continuum between wanting to litigate Ecocide against humanity, worship Gaia and wanting humanity to be extinct.

Steffen also shares Flannery’s prognosticatory sleight of hand skills. But like Flannery, Steffen is also found wanting in terms of what he has said before. In a recent article Steffen used the Black Saturday fires in Victoria to illustrate how bad AGW is and how worse it is going to become. However, as Bolt noted, in an earlier interview Steffen had stated that the fires and the Victorian drought were not due to AGW.

This goes beyond wanting to have your cake and eat it too; if this sort of contradiction were done in a court under oath it would be perjury. Why isn’t Steffen taken to task for such outrageous contradictions? For the same reason Flannery isn’t.

In the same article in which Steffen possibly perjured himself about a connection between extreme weather, bushfires and AGW he also advocates Sweden as alternative to the fossil fuel economy of Australia.

This comparison with Sweden is not in the ‘out and out-lying’ category as the fire connection is but it neatly showcases a couple of other forms of lying which we have come to expect from the advocates of AGW.

In his panegyric about Sweden Steffen asserts that Australia can, like Sweden, rely on renewable energy to transition away from fossil energy. Steffen neglects to mention that Sweden has only been able to do this by investing heavily in Nuclear and Hydro energy, 2 forms of non-fossil fuel which the Greens are steadfastly opposed to, as Professor Davidson points out.

This is lying by omission.

Professor Davidson notes other truth discrepancies in Steffen’s comparison with Sweden; for instance Steffen notes that Sweden has economically outperformed the G7 nations and that Australia should again follow in Sweden’s example. This lie is the lie of cherry-picking, a mainstay of AGW science; cherry-picking is where you pick data which supports your position while ignoring relevant data which doesn’t. The relevant data which Steffen ignores here is that while Sweden outperformed the G7 nations, most of which are basket-cases, Australia outperformed Sweden by some margin. Why would Australia want to emulate a nation which is doing worse than us?

Professor Davidson continues by looking at Steffen’s dismissal of the “myth” that:


taking vigorous action on climate change will damage or slow the economy. Quite the opposite seems to be the case.

In fact the evidence is at best neutral for Steffen’s dismissal and, when other nations are looked at, adverse. Spain for example, more than any other nation in Europe, has invested in typical green energy such as wind and solar; Spain’s CO2 emissions have remained steady but it is now the economic pauper of Europe with 24% unemployment and all the other attendant economic woes.

This form of lie is the ½ truth or in pure political terms, spin.

Steffen is a propagandist, an alarmist who is prepared to tell lies and exaggerate to promote his theology. This is the basis of the AGW message; all the leading exponents of AGW do it; Kofi Annan, Nobel prize-winning economist Thomas Schelling, the grand-daddy of AGW scientists, Hansen with his invocation of Venus on Earth as the inevitable result of AGW; and who can forget Hansen’s little ‘trick’ when he gave his 1988 speech to members of congress about warming when the air conditioner wasn’t working; perhaps Hansen was already aware of research which shows that people believe AGW when it is warm and don’t when it is not.

The template for exaggerating and lying by the AGW believers was described by the late Professor Steven Schneider:

On the one hand, we are ethically bound to the scientific method, in effect promising to tell the truth, the whole truth, and nothing but...which means that we must include all the doubts, caveats, ifs, and buts.
"On the other hand, we are not just scientists, but human beings as well. And like most people we'd like to see the world a better place, which in this context translates into our working to reduce the risk of potentially disastrous climate change. To do that we have to get loads of media coverage. So we have to offer up scary scenarios, make simplified, dramatic statements, and make little mention of any doubts we might have.

We know that this is done automatically by AGW scientists because the emails have revealed the lacuna between what these scientists say publically and what they say privately.

To say one thing publically and another privately is hypocrisy; hypocrisy is another form of lying.

Steffen doesn’t feature prominently in the email exchanges but he is mentioned in dispatches and from early in the piece.

Steffen is part of the AGW furniture; he does “scary scenarios”, contradicts himself and assiduously promotes the AGW narrative. People forget that this narrative has been adjudicated upon, in a real court, unlike the pretend court Steffen has played in. That court was the English High Court where Gore’s film, An Inconvenient Truth was taken to hearing by an irate parent. The court’s findings were remarkable. By agreement the parties assumed AGW was real and narrowed the litigation to whether the consequences of AGW, as depicted in Gore’s film were real.

The court found that all 11 core consequences of AGW claimed by Gore to exist were either exaggerated or unrelated to AGW. In short the film was largely based on lies.

AGW is an issue which is based on exaggerations, hypocrisy, scare-mongering, failed predictions, in short lying. To a lesser or greater extent all its leading exponents use these tactics to promote the cause. Steffen is one of those leading exponents.

Blogs agog: What's up with Anthony. 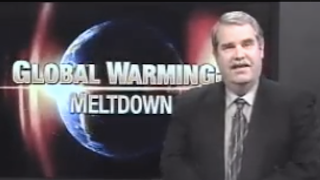 Anthony Watts made an announcement and updated it on WUWT - (LINK)


Something’s happened. From now until Sunday July 29th, around Noon PST, WUWT will be suspending publishing. At that time, there will be a major announcement that I’m sure will attract a broad global interest due to its controversial and unprecedented nature.

This set the blog world agog
In Australia, if you stay up and watch the Olympics, as the competition winds down,  you will be able to go to WUWT and see What's Up at 5am Monday morning.  As Simon says: "Thanks, Anthony! It had better be worth it!"

BEST is not best, as Josh puts it - Skewered by TITANthony.

The big news is out on Watts Up: Half the trend is due to badly placed thermometers and erroneous adjustments

A Sceptic smarter than Al Gore 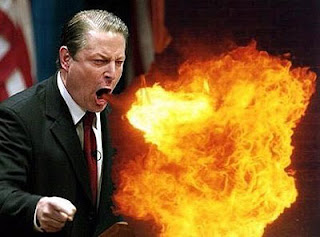 Paul Mulshine in an opinion piece for New Jersey's nj.com:


A global warming skeptic who's a lot smarter than Al Gore

Ever since the 1980s one of my favorite authors in the realm of science has been Freeman Dyson.

The Princeton physicist has written books on a wide range of topic, from the potential perils of nuclear weapons to discoveries in the human genome.

Paul mentions that he is reading a book "Project Orion: The True Story of the Atomic Spaceship." about Dyson written byhis son George.


He thus gets a good laugh at all of the simplifiers of science, such as Gore and the rest of the what I like to call the climate scientology cult.

Anyone who knows anything about science realizes that something as complex as the Earth's atmosphere offers too many variables to be understood in a matter of mere years.
Research is just beginning into the role of carbon dioxide in the atmosphere, yet the climate scientologists claim to know exactly what effect each tiny increment of CO-2 will have on the environment.

See other NCTCS posts on Freeman Dyson HERE and HERE.