Global warming over past century was half of IPCC claims 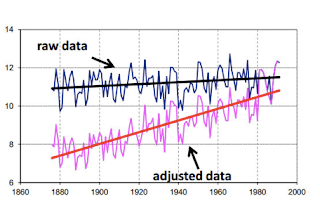 HockeySchtick reports on a new paper presented at the European Geosciences Union meeting. The paper finds:


......global warming over the past century was only about one-half [0.42°C] of that claimed by the IPCC [0.7-0.8°C]. The paper finds that in 2/3 (67%) of the weather stations examined, questionable adjustments were made to raw data that resulted in "increased positive trends, decreased negative trends, or changed negative trends to positive," whereas "the expected proportions would be 1/2 (50%)."

IPCC Past reports were JUNK


IPCC Admits Its Past Reports Were Junk

The IPCC is the world's most prominent source of alarmist predictions and claims about man-made global warming.

The IAC reported that IPCC lead authors fail to give "due consideration ... to properly documented alternative views" (p. 20), fail to "provide detailed written responses to the most significant review issues identified by the Review Editors" (p. 21), and are not "consider[ing] review comments carefully and document[ing] their responses" (p. 22).  In plain English: the IPCC reports are not peer-reviewed.

Six Decades of Warming not unusual, unnatural or unprecedented


The authors write that "the Andean snowpack is the main source of freshwater and arguably the single most important natural resource for the populated, semi-arid regions of central Chile and central-western Argentina," as it "provides most of the water needed for human consumption, agriculture, industries, hydroelectric generation and aquifer recharge." And, hence, the world's climate alarmists are wont to agonize over what global warming might do to this precious natural resource.

A paper published in the Journal of Geophysical Research shows that "Contrary to the worries of climate alarmists, it would appear that there is nothing unusual, unnatural or unprecedented about the highs and lows of the Andean snowpack over the last six decades of global warming."