Karoly: the brains of AGW in Australia. 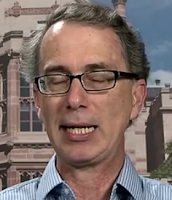 Karoly: the brains of AGW in Australia.
by Anthony Cox
There is no doubt Tim Flannery is the public face of the ‘science’ AGW in Australia. That is instructive enough with Flannery’s atrocious and shameless prediction record, his promotion of renewable energy which he has invested in and his adoration of Gaia which leads him to suggest humanity should become the Earth’s “Gaian nervous system and brain”; which is a bit like taking the concept of Dr Doolittle one step further; why just talk to the animals if you can put the words, or should that be moos and grunts and growls, into their mouths.

However Flannery is a loose cannon with the science; his 1000 year prediction for a temperature response even if the world, not just little Australia, stops producing any CO2 at all, which would mean everyone living in a cave, really undermined the urgent CO2 narrative and, ironically, is the only prediction Flannery is likely to get right.

Besides Flannery lives by the water which makes his rabbiting on about sea level rise an embarrassment.

So, whenever the AGW machine wants some heavy-hitting science they wheel out David Karoly.

Karoly is an arrogant man. He browbeats other academics, he browbeats the heads of major corporations and he has the temerity to sneer at Steve McIntyre for having no scientific knowledge.

McIntyre is of course one of the premier scientific authorities on AGW. He has single-handedly unmasked the fraudulent and unscientific processes which produced the infamous Hockeystick; he has been a joint author of a paper refuting the ostensibly landmark paper by Steig which purported to establish that the Antarctic was warming consistent with AGW.

And in doing all this McIntyre has been financially self-supporting unlike Karoly who has had the benefit of a well paid job, vast resources and even more vast government grants.

There is also an irony in Karoly’s dismissal of McIntyre’s nonpareil scientific knowledge. It was McIntyre who revealed a fundamental and elementary mistake in Karoly’s new paper supposedly establishing a Hockeystick in the Southern hemisphere. This paper made elementary mistakes and did not incorporate methodology safeguards it claimed to have done.

Karoly, at least had the decency to admit this, unlike other authors of the paper.

But in terms of such errors Karoly has form; he has made such blunders before. In a study supposedly showing the effect of AGW on butterflies Karoly enthusiastically reported that:

In fact, again Karoly had no idea. PhD student and sceptic Marc Hendrickx noted that Karoly’s study, after proper statistical analysis showed no alteration of the emergence time of butterflies.

World expert of Hydrology, Professor Stewart Franks has written to the ABC about Karoly’s persistent and erroneous comments about evaporation, floods and in particular the QLD floods. Professor Frank’s comments are both pointed and plain:

I would like to protest the repeated interviews with Prof David Karoly with regard to the Queensland floods.
Since 2003, I have published a number of papers in the top-ranked international peer-reviewed literature regarding the role of La Nina in dictating Eastern Australian floods.

There has been no evidence of CO2 in affecting these entirely natural processes, irrespective of their devastating nature.
Why is it then, that someone without any publication nor insight in this key area of concern for Australia is repeatedly called upon to offer his personal speculation on this topic?
This is not a new problem with Prof. Karoly.

In 2003, he published, under the auspices of the WWF, a report that claimed that elevated air tempertatures, due to CO2, exacerbated the MDB drought. To quote…


‘...the higher temperatures caused a marked increase in evaporation rates, which sped up the loss of soil moisture and the drying of vegetation and watercourses. This is the first drought in Australia where the impact of human-induced global warming can be clearly observed...’

The problem with this is that Prof Karoly had confused cause and effect.

During a drought, moisture is limited. The sun shines on the land surface, and as moisture is limited, evaporation is constrained, and consequently the bulk of the sun’s energy goes into surface heating which itself leads to higher air temperatures. This effect can be as much as 8-10 degrees celsius.
This is a common confusion made by those who have not studied the interaction of the land surface hydrology and atmosphere, as Prof. Karoly has not.

Undoubtably Prof Karoly has expertise but not in the area of hydrology or indeed in many other areas on which the ABC repeatedly calls on him for ‘expert’ comment.

Could I please ask that you cast your net a little wider in seeking expertise? These issues are too important for the media comment to be the sole domain of committed environmental advocates. Surely objective journalism also requires objective science?

Needless to say, neither the ABC nor Karoly has taken Professor Frank’s advice.

Karoly’s egregious errors include his participation in the IPCC reports; Karoly’s comments about an alteration in the Diurnal temperature Range in SE Australia were incorporated into AR4 but not referenced and were, in any event, contrary to observational evidence.

Karoly, hence, has made serious errors in presenting evidence for AGW. This has not stopped him from continuing to, in a way Flannery would be proud of, making dire predictions about AGW, which are both totally contradictory, such as blaming AGW for droughts and then floods and justified by reference to his own flawed work.

Karoly is the scientific brains supporting the ALP/Green government’s policies on AGW. This is appropriate because it is apparent that Karoly shares the same capacity as this government for mistakes, ego and disdain for the damage to Australia that those policies are causing.
Posted by Geoff on July 16, 2012 3 comments: