"The Delinquent Teenager who was mistakenfor the world's top Climate Expert" **

This is the rather cryptic title of a must-read book authored by Canadian investigative journalist, Donna Lamframboise. The French scholars among you will know her surname is pronounced (La–fram-bwa) and means raspberry.

Donna is currently on an Australian lecture tour sponsored by the Institute of Public Affairs (IPA) and her talk last night (Tuesday 10/7) was heard by a full house of several hundred at the Sheraton on the Park, Sydney.

She began by expressing condolences to Australia in relation to the recent blight of the Carbon (dioxide) Tax and pointed out that Australia is being described as “Fantasy Island" by Roger Pielke Jr. (back up LINK here and here) because of the impossibility of achieving stated Government targets of emission reduction. The Canadian Tory Government has abandoned plans for any such taxes and for any such emission reduction targets.

The bulk of her talk then concentrated on exposing the deception underpinning the reports of the Intergovernmental Panel on Climate Change (IPCC) with regard to its claim that only the most expert, peer reviewed science underpins those reports. She cited numerous examples which showed that quite a few lead authors of IPCC reports were youthful graduate students, still working on their doctorates, while many others had strong links to environmental activist groups such as The World Wildlife Fund and Greenpeace.

She also exposed the fact that many cited references in IPCC reports were not peer reviewed papers authored by reputable climate scientists but rather were extracted from magazines, newspapers and student essays. She also pointed out that IPCC Chair Rajendra Pachauri had always insisted that all reports were peer reviewed. However, after her exposure, to her knowledge they have not made that claim since.

Her talk was followed by an extended question time during which, inter alia, she suggested that the best way to induce our conservative politicians to ‘back-away’ from current commitments to Renewable Energy and Emission Reduction targets might be to emphasise the drastic economic impact on low income Australians.

This member of the audience left the presentation highly impressed with her erudite presentation, her charm, her courage and her aura of ‘genuineness’. “More power to her”, I say. Likewise to the IPA.

** The title of her book reflects the notion that the IPCC, instead of behaving like a mature, distinguished and trustworthy authority, instead resembles a selfish, deceitful youth who does not know right from wrong. The Australian paperback edition is available from Connor Court publishers at $29.95.

Something Fishy about the carbon tax. 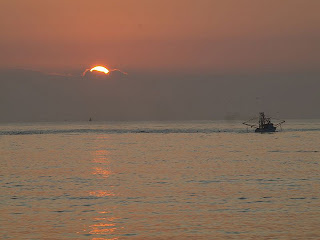 AAP reports that:
Opposition Leader Tony Abbott and his small business spokesman Bruce Billson hit the Melbourne fish markets at dawn on Wednesday to underline the impact of the tax on the seafood industry.

If Australian Fish producers have to pay a carbon tax on diesel for their trawlers, light and power for their premises and refrigeration they will be at a disadvantage compared with international competitors.

Mr Abbott said the carbon tax will affect the seafood industry at every level.

Meanwhile a Dutch super trawler 143-metre, 9500-tonne Margiris is headed for Australia.  Margiris is described as a “floating vacuum cleaner” that can

devastate local fishing stocks in the manner seen in west Africa and the South Pacific, describing the quota as a "licence to plunder".

Fish on the Lithuanian-flagged factory ship (which is to be re-flagged as Australian) can be frozen in 20kg blocks, ending the need to return so often to shore.

CO2 Science reports  of a new peer-reviewed paper published in Climate of the Past 8: 227-249

As Ljungqvist et al. describe it, they developed "a new reconstruction of the spatio-temporal patterns of centennial temperature variability over the NH land areas for the last twelve centuries based on 120 proxy records," which were "retrieved from a wide range of archives including, but not limited to, ice-cores, pollen, marine sediments, lake sediments, tree-rings, speleothems and historical documentary data." And with respect to how big an improvement their data base makes compared to prior studies of this type, in terms of the amount and distribution of data employed, they present a list of antecedent analyses where the number of proxy records used ranged from only 3 to 46 (compared to their 120), and where the number of records with annual resolution ranged from only 3 to 30, whereas their study included 49 such annual-resolution records.

What it means
As we have often remarked after reviewing the results of literally hundreds of paleo-temperature reconstructions stretching back over a millennium or more, there is nothing unusual, unnatural or unprecedented about earth's current level of warmth when compared to that of the Medieval Warm Period, when there was way less CO2 in the air than there is currently (~280 ppm then vs. ~390 ppm now). And this fact suggests that there is no compelling reason to necessarily attribute any of the post-Little Ice Age warming to this miniscule trace gas of the atmosphere.


Read more at CO2 Science and Climates of the Past.