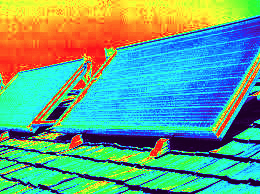 The Chapters include inter alia
And one relevant to Australia's carbon tax debate:

One of our members, a retired scientist,  pointed me to the book, and in particular the chapter on solar cells.

Solar Cells Linked to Greenhouse Gases Over 23,000 Times Worse than Carbon Dioxide
Solar cells do not offset greenhouse gases or curb fossil fuel use in the United States according to the book.


Green Illusions explains how the solar industry has grown to become one of the leading emitters of hexafluoroethane (C2F6), nitrogen trifluoride (NF3), and sulfur hexafluoride (SF6).

Hexafluoroethane has a global warming potential that is 12,000 times higher than CO2, according to the Intergovernmental Panel on Climate Change (IPCC). It is 100 percent manufactured by humans, and survives 10,000 years once released into the atmosphere. Nitrogen trifluoride is 17,000 times more virulent than CO2, and SF6, the most treacherous greenhouse gas, is over 23,000 times more threatening.

The solar photovoltaic industry is one of the fastest-growing emitters of these gases, which are now measurably accumulating within the earth's atmosphere according to the U.S. National Oceanic and Atmospheric Administration (NOAA). A NOAA study shows that atmospheric concentrations of SF6 have been rising exponentially. A paper published in the peer-reviewed journal Geophysical Research Letters documents that atmospheric NF3 levels have been rising 11 percent per year. "

If photovoltaic production grows, so will the associated side effects," claims Zehner. "Even worse, there's no evidence that solar cells offset fossil fuel use in the American context."

According to the Intergovernmental Panel on Climate Change, SF6 is the most potent greenhouse gas that it has evaluated, with a global warming potential of 22,800[11] times that of CO2 when compared over a 100-year period. Measurements of SF6 show that its global average mixing ratio has increased by about 0.2 ppt per year to over 7 ppt.[12] Sulfur hexafluoride is also extremely long-lived, is inert in the troposphere and stratosphere and has an estimated atmospheric lifetime of 800–3200 years.[13] SF6 is very stable (for countries reporting their emissions to the UNFCCC, a GWP of 23,900 for SF6 was suggested at the third Conference of the Parties: GWP used in Kyoto protocol).[14] Average global SF6 concentrations increased by about seven percent per year during the 1980s and 1990s,

The Greenhouse Gas That Nobody Knew

When industry began using NF3 in high-tech manufacturing, it was hailed as a way to fight global warming. But new research shows that this gas has 17,000 times the warming potential of carbon dioxide and is rapidly increasing in the atmosphere – and that's turning an environmental success story into a public relations disaster.
by richard conniff

Hypothetical question: You’re heartsick about global warming, so you’ve just paid $25,000 to put a solar system on the roof of your home. How do you respond to news that it was manufactured with a chemical that is 17,000 times stronger than carbon dioxide as a cause of global warming?

It may sound like somebody’s idea of a bad joke. But last month, a study from the Scripps Institution of Oceanography reported that nitrogen trifluoride (NF3), with a global warming potential of 17,000, is now present in the atmosphere at four times the expected level and rapidly rising. Use of NF3 is currently booming, for products from computer chips and flats-screen LCDs to thin-film solar photovoltaics, an economical and increasingly popular solar power format.

Moreover, the Kyoto Protocol, which limits a half-dozen greenhouse gases, does not cover NF3. The United Nations Framework Convention on Climate Change now lists it among five major new greenhouse gases likely to be included in the next phase of global warming regulation, after 2012. And while that may be reassuring, it also suggests the complicated character of the global warming problem.
--------- 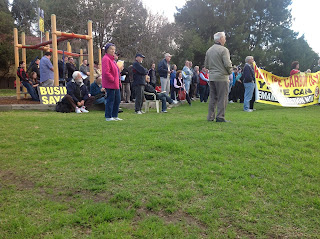 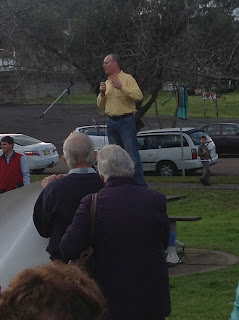 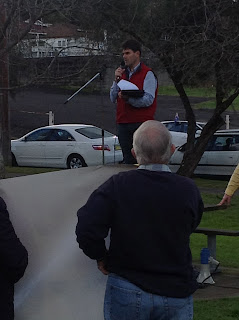 Independant Councillor Doug Eaton who presented a good range of facts.When questioned about the Gold Coast Council's decision to not pay the carbon (dioxide) tax, Cr Doug Eaton said that -for an example -  The cost of the carbon dioxide tax will mean, looking at the Wyong Council's road work budget - Twenty five per cent less roads. 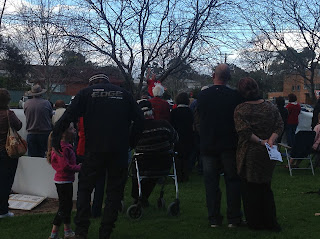 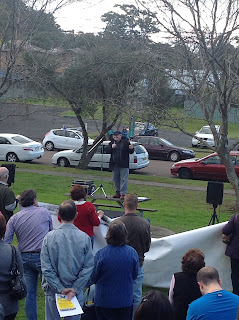 Coastal Residents Group Secretary Pat Aiken. When I congratulated Pat on his win with Gosford Council's removal of the sea level rise notifications, he said (my paraphrasing) it was only a battle, not the war.


THOUSANDS of Central Coast property owners were celebrating this week after Gosford Council's surprise decision to remove sea level rise notifications from planning documents.
The notifications, placed on S149(5) certificates attached to properties considered to be at risk in the next 100 years from the effects of sea level rise, have been the source of continual protest from home owners since they were placed two years ago.

As a fund raiser, Coastal residents are raffling a superb pastel painting by Colina Grant 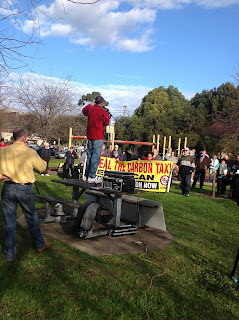