The most recent climate model was Trenberth K.E. J T Fasullo and J Kiehl 2009 "Earth's Global Energy Budget" Bull Amer Meteor Soc. 90 311-323. This model, and the quantities given in it, are the basis for all the claims  that  human-produced so-called greenhouse gases have to be reduced or dangerous warming and other harm to the climate will take place.  The paper is available free on the Internet.

The paper begins with the statement:


They then go on to say  "The energy balance can be upset in various ways", thus admitting that it may not be balanced.

The entire "greenhouse" theory depends on the assumption that changes in the greenhouse gases are the only influence on the climate.. The energy input and output are therefore always "balanced" provided you allow for any additional  greenhouse gases which have arrived since the supposed zero year, which is taken to be the year 1750

No place on the earth is ever in energy equilibrium. Any single spot warms when the sun shines, depending on its albedo,  cools at night depending on its emissivity and thermal properties. Both day and night  it cools when it rains or  snows, .

Geology has shown that thermal fluctuations of different sizes and different lengths have always been present. Nothing that has been happening recently can truly claim to be "unprecedented. There is no reason to suppose that there was any energy "balance" in 1750, or indeed in any other year. This basic truth means that all the models are worthless.

This particular budget is claimed to apply from the period May 2000 to May 2004. so that on top of the basic false assumption we have a prediction for the future values of all the figures quoted, to the first place of decimals.

Then,  it is not even "balanced" as it finds a surplus energy of 0.9W/msq. So we are warming anyway, without greenhouse gases.

Trenberth is on record (Climategate Emails) as calling this situation "a travesty" There has been much anguish in trying to explain this, and it has been so successful that in the latest IPCC Report, which I am supposedly not allowed to mention, they have managed to rejig the figures so successfully that there is now a net cooling of 0.6W/msq. So we are now cooling !

Yet it is admitted in the TFK paper . "It is not possible to give very useful error bars to the estimates" and "while the spread of various values provides some measure of agreement, it generally overestimates the uncertainty we can assign to our best estimates."  We just wonder about the worst estimates

All this before we ever begin to ask how this picture can possibly provide a plausible model for the climate.

Although some figures are given in this diagram for heat losses by convection ("Thermals") and from evaporation of water vapour and its deposition ("Latent Heat") these figures seem to be particularly uncertain. Yet meteorologists have found after scientific study of over 200 years that these factors are the main ones influencing our daily weather, not just locally but globally.

An important error is the assumption that some sort of average can be obtained from day and night. The energy situation with the sun is completely different from the energy situation without the sun. When the sun shines the earth warms and is cooled by convection and evaporation of water. Both are influenced by turbulence, wind pattern and time of day. At night everything cools also influenced by turbulence and wind pattern. By day rain and snow participate in cooling, and with snow the cooling takes time. At night some warming may arise from daytime winds or by deposition of dew or frost. No attempt seems to have been made to identify these very different situations. Nobody measures the temperature of rainwater or snow. .

The satellite measurements that provide many of these figures are not sensitive enough to distinguish the difference  between day and night as they circle the earth, so they provide averages which do not represent any real situation.

This model is not just a travesty, it is an unmitigated and continuing disaster from which we are all suffering.

Sustainability is impossible. There are only two directions; forward and backward.
Posted by Geoff on July 02, 2012 No comments: 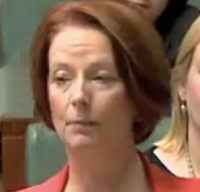 Ms Gillard is famous for saying: by

There will be no carbon tax under a government I lead.

Supporters of Ms Gillard have stated that in politics things change and because Ms Gillard could not envisage being in a political partnership with the Greens and needing their support to stay in government, she should not be bound by her earlier promise.

In effect Ms Gillard’s supporters claim it was not a lie.

This cannot be sustained. It was a lie. The choice for Ms Gillard when trying to establish government was to either honour her promise and try to reach an agreement with the Greens on that basis or lie.

Does this lie reflect Ms Gillard’s true character and approach to dealing with the Australian people?

In an interview on AM Ms Gillard said this:

Putting a price on carbon is in our nation's interest. It means that we will lock in prosperity for the future and do the right thing by our environment.

Is the CO2 tax in Australia’s interest? Australia’s great economic advantage is that we have vast amounts of cheap energy sources; coal, gas and possibly oil. Australia also has the largest uranium reserves in the world.

Uranium is banned by the ALP. The CO2 tax is designed to reduce CO2 emissions and to save the planet from the catastrophe of man-made global warming [AGW]. The CO2 tax can only save the planet from CO2 emissions if the fossil fuels, coal, gas and oil are not used. The CO2 tax is supposed to make the fossil fuels too expensive to use and to enable wind and solar to replace them. This will mean a reduced lifestyle because energy will be much more expensive and less reliable. This will mean Australians are poorer, can afford less electricity and will lead less prosperous lives.

This contradicts what Ms Gillard claims about the CO2 tax, that it will make Australia more prosperous. Is Ms Gillard lying again or does she genuinely believe what she is saying?

Let’s look at an associated fact. Exports of coal will not be curtailed. Ms Gillard admits this in the same ABC interview when she says:

There has been a hysterical fear campaign from the doomsday merchants who have tried to convince people over the last 12 months that on the time that carbon pricing came into being, that we'd see for example the coal industry go out of business.

How does this make sense? Ms Gillard, and indeed not only Greg Combet, but everyone in government from the ALP, to the Greens and the independents, Mr Oakeshott and Mr Windsor, also claim that it is essential to stop CO2 emissions to save the planet. Yet the coal industry is going to continue exporting coal to the world, which will continue using coal in expanding fashion. Other nations that Australia exports coal to will continue to use coal at an expanding rate; this includes China, now the world’s largest CO2 emitter and Australia’s largest market for coal.

So, we have a situation in Australia where Ms Gillard and other people like Mr Combet, claim that Australia’s prosperity will increase if we stop using coal, yet Australia is going to increase exporting coal to foreign nations, primarily China.

Does this mean Australia wants China to be less prosperous?

Obviously this does not make sense. Either Ms Gillard believes what she is saying, in which case she is a fool.

Before the last election, Prime Minister Julia Gillard said: "There will be no carbon tax..." and Wayne Swan describe it a hysterical.

On day 1 of the tax, Prime Minister, for the first time in a long time, went on the ABC's Insiders program to push pro-tax proaganda.

BARRIE CASSIDY: That language that he (Opposition leader Abbott) uses though, and he does call you a liar often, after a while you think it has to hurt politically, if not personally?
JULIA GILLARD: Well, I've explained the circumstances of the last election campaign, and when I said those words about a carbon tax I meant every one. But our nation's been involved in a debate now for many long years about putting a price on carbon and tackling climate change and we have got this done. Yes, with a fixed price, a carbon tax, if you like, for the first three years and then an emissions trading scheme to follow.


Treasurer Wayne Swan said "today is the day that Tony Abbott is going to get mugged by the truth".

Well, both the PM and deputy PM lied to retain power. They are meant to represent the people.
There were rallies around Australia on day 1 of the tax. In Sydney, thousand marched through the streets from the north of Hyde Park to Belmore Park near Central Rail.


There were many worthwhile speakers; Malcolm Roberts, John Macrae, Craig Kelly (Lib), and Scientist David Archibald - Bronwyn Bishop’s speech made it eminently clear that the Liberals were about getting rid of the carbon tax and no more. Tony Abbot's opposition to the tax has raised his numbers way above Malcolm Turnbull's.  However he still talks of reducing CO2 emissions and Renewable Energy Targets.

demonstrating the small amount of atmospheric CO2 with a yellow strip twice as long as the stage.

It’s a strange business this preoccupation with climate change and desire to save the planet by way of a carbon tax. Carbon is the chemical element with symbol C and atomic number 6. Carbon is known to form almost ten million different compounds including the hardest naturally occurring substance the diamond. But more than this, carbon compounds form the basis of all known life on Earth. Carbon should not be equated with pollution – and neither should carbon dioxide that is the stuff trees breathe in.


If the Treasurer, Wayne Swan, was really serious about us all reducing energy consumption he would surely provide no compensation for the increased costs associated with the tax. He would simply insist ordinary Australians pay more so they consume less.


If I wanted Australia to fail -


“If I wanted Australia to fail, to follow not lead, to suffer not prosper, to despair not dream, I’d start with energy.  I’d cut off Australia’s supply of cheap, abundant energy.  I couldn’t take it by force.  So I’d make Australians feel guilty about using the energy that heats their homes, fuels their cars, runs their businesses and powers their economy.  I’d make cheap energy expensive.  So that expensive energy would seem cheap.” 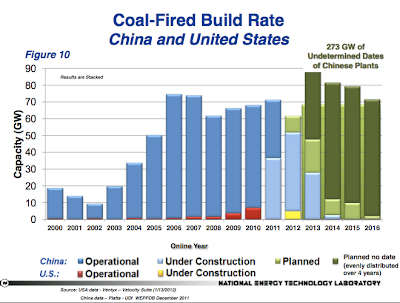 ....the massive expansion of aluminium smelting in China, and the fact that aluminium companies are moving their smelting operations to countries where there are very low emissions, electricity sources, gas and renewable energy resources in particular. 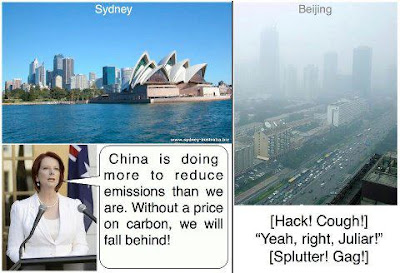