Should Australia keep the carbon tax? 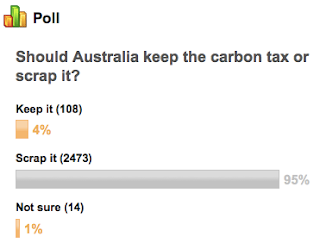 You must wonder about some-one who deliberately goes to a poll page and then clicks on "Not sure!"

Oceans are not acidic

This blog has previously written that the oceans are alkaline, not acidic.

Letter from The Olympian (link)  by Ken Schlichte, an expert forest soil scientist in western Washington

EPA's efforts will have no effect

Oceans are not acidic, despite the front-page headline, “EPA tackles acidic oceans.”

Oceans are actually alkaline with a surface pH of around 8.1.

The article with this headline stated that the EPA is exploring whether to use the Clean Water Act to control greenhouse gas emissions because climate change legislation is stalled in Congress. The Washington Department of Ecology had originally been asked to use the Clean Water Act to regulate emissions, but stated that there wasn’t enough data about acidification of specific bodies of water to justify any such listings.

The serious concern being used by the EPA to justify its control of greenhouse gas emissions is the up-welling of deep ocean water along the West Coast by northwest summer winds. This deep ocean water is alkaline, but is somewhat less alkaline than the surface ocean water because it is colder and therefore contains more dissolved carbon dioxide.

The deep ocean water up-welling along the West Coast may not been have exposed at the ocean surface for centuries and the EPA efforts to control current greenhouse gas emissions will therefore have no effect on the pH of this deep ocean water for many years. These EPA efforts will also have no effect on the northwest winds and the ocean up-welling that they will continue to create along the West Coast. 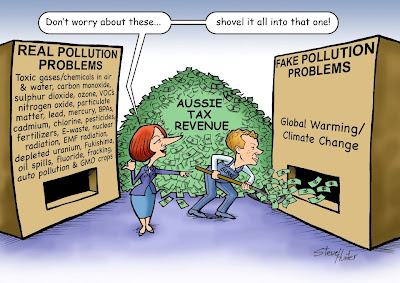 Settled Science? No such thing.

Data does not actually speak for itself


Gary Meyers has considerably overstated the confidence that can be placed in climate data, their interpretation, and their use in predicting future climate (Real climate data speaks for itself, Letters 27/6). This is not to belittle the work of ‘tens of thousands of dedicated people who have collected the data’. The fact is that there are limitations on the precision and accuracy of the data.

The comparison with computer models is equally tendentious. The model performance through the 20th century is tuned by changing the impact of atmospheric aerosols, for which even the IPCC agrees there is only a low level of understanding.

If one takes a truly critical stance the data and current models give little confidence to predicting future climate change.

William Kininmonth
Kew, Vic
William Robert Kininmonth is a retired Australian meteorologist noted for his frequent writings on the topic of climate change.

Settled science? No such thing

THE Intergovernmental Panel on Climate Change is a branch of the UN that advises governments on the topic of global warming allegedly caused by human greenhouse emissions.

Contrary to common assumption, the IPCC does not deal with the wider topic of climate change in general. And neither is it the role of the scientists who advise the IPCC to conduct new research as such (though some, incidentally, do ).

Rather, the IPCC's task is to summarise the established science as represented in the published scientific literature.

On February 3, 2010, Rajendra Pachauri, head of the IPCC, commenting in The Hindu on the IPCC's 2007 Fourth Assessment Report, said: "Everybody thought that what the IPCC brought out was the gold standard and nothing could go wrong."

By "gold standard", Pachauri was referring to the IPCC's oft-made claim that the scientific literature on climate change it surveyed was only that published in peer-reviewed professional research papers.

Interestingly, Albert Einstein's famous 1905 paper on relativity was not peer reviewed. It is therefore quite clear peer review is not a precondition for excellent, indeed epoch-making, scientific research.

Peer review is a technique of quality control for scientific papers that emerged slowly through the 20th century, achieving a dominant influence in science after World War II.

The process works like this: a potential scientific author conducts research, writes a paper on their results and submits the paper to a professional journal in the relevant specialist field of science.

The editor of the journal then scan-reads the paper. Based on their knowledge of the contents of the paper, and of the activities of other scientists in the same research field, the editor selects (usually) two people, termed referees, to whom he sends the draft manuscript of the paper for review.

Referees, who are unpaid, differ in the amount of time and effortthey devote to their task of review. At one extreme a referee will criticise and correct a paper in detail, including making comments on the scientific content. At the other extreme, a referee may merely skim-read a paper, ignoring obvious mistakes in writing style or grammar, and make some general comments to the editor about its scientific accuracy or otherwise.

Generally neither type of referee, nor those in between, check the original data, or the detailed statistical calculations (or, today, complex computer modelling) that often form the kernel of a piece of modern scientific research.

Each referee recommends whether the paper should be published (usually with corrections) or rejected, the editor making the final decision.

In essence, traditional peer review is a technique of editorial quality control, and that a scientific paper has been peer reviewed is absolutely no guarantee the science it portrays is correct.

Indeed, it is the nature of scientific research that nearly all scientific papers are followed by later emendation, or reinterpretation, in the light of new discoveries or understanding.

A case in point is the recent paper by University of Melbourne researcher Joelle Gergis and co-authors that claimed to establish the existence of a southern hemisphere temperature "hockey stick". Now, the authors have rapidly withdrawn the study after fundamental criticisms of it appeared on Steve McIntyre's Climate Audit blog and elsewhere.

The Gergis paper differs in kind from many other IPCC-related studies by establishment climate research groups only in that the tendentious science it contains has been rapidly exposed as flawed. This exemplifies how the role of nurturing strong and independent peer review has now passed from the editors of journals to experts in the blogosphere, and especially so for papers concerned with perceived environmental problems such as global warming.

Scientific knowledge, then, is always in a state of flux; there is simply no such thing as "settled science", peer reviewed or otherwise. During the latter part of the 20th century, Western governments started channelling large amounts of research money into favoured scientific fields, prime among which has been global warming research.

This money has a corrupting influence, not least on the peer-review process.

Many scientific journals, including prestigious ones, are captured by insider groups of leading researchers in particular fields. In such cases, editors deliberately select their referees from scientists who work in the same field and share similar views.

The "climategate" email leak in 2009 revealed this cancerous process is at an advanced stage of development in climate science. A worldwide network of leading climate researchers was revealed to be actively influencing editors and referees to approve for publication only research that supported the IPCC's alarmist view of global warming and to prevent the publication of alternative views.

Backed by this malfeasant system, leading researchers who support the IPCC's red-hot view of climate change endlessly promulgate their alarmist recommendations as "based only upon peer-reviewed research papers", as if this were some guarantee of quality or accuracy.

Peer review, of course, guarantees neither. What matters is not whether a scientific idea or article is peer reviewed, but whether the science described accords with empirical evidence.

So what about the IPCC's much-trumpeted, claimed "gold standard" of only using peer-reviewed papers? It is completely exposed by Canadian investigative journalist Donna Laframboise, who showed an amazing 30 per cent of the articles cited in the definitive Fourth Assessment Report of the IPCC were from non-peer-reviewed sources, including student theses and environmental lobbyist reports.

The repetition of the "we only use peer-reviewed information" mantra that is so favoured by climate lobbyists and government-captive scientific organisations signals scientific immaturity.

It also indicates a lack of confidence or ability to assess the scientific arguments about dangerous global warming on their own merits and against the empirical evidence.

Professor Bob Carter is a palaeoclimatologist at James Cook University, Townsville and an emeritus fellow of the Institute of Public Affairs.