Previously, NCTCS blog posted a letter from Dr Gordon Fulks under the heading - Sacked Without Sense (link) about the dismissal by Oregon State University of Professor Nick Drapela.


Tom Harris of the International Climate Science Coalition (ICSC) has posted the following interview with Climatologist Tim Ball  talking of this matter.

Although he was given no reason, it is widely believed that Professor Drapela was fired because of his scepticism of man made global warming (AGW.)


Dr Ball talks of Professor Drapela's ratings which can be found HERE.


Nicholas Drapela, an Oregon State University faculty member and vocal critic of climate change, was fired without explanation from his job, KVAL reports.
On May 29, Drapela received a call in his office from the department chair, who read him a prepared statement and informed Drapela that he would need to return his office key.
The university did not inform Drapela why he was being fired. His requests for such an explanation have all been denied, according to The Daily Caller -- raising speculation that we was fired due to his controversial view that climate change is not a man-made phenomenon.... 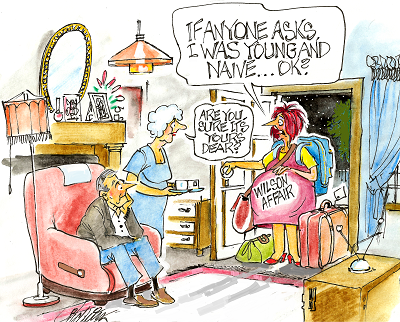 As Larry calls it, the "(Bruce) Wilson Affair" has been written about on NCTCS blog here, here, here.

Andrew Bolt has written of it, as has Larry more than once (eg HERE).


Gillard is involved because she helped Wilson set up bank accounts which he used for his schemes, but Gillard insists she acted lawfully, did not know what Wilson was doing with those accounts, and did not profit from them. She was “young and naive”, she has said, being only in her mid 30s and the partner of law firm Slater and Gordon.

Barnaby Joyce spoke of it in Parliament HERE.


Certainly. The Prime Minister's office said that they should look at what people did in their younger days. I imagine that means that under their guidelines we can ask serious questions about what people did in their mid-30s, when they were a partner at Slater and Gordon. One would presume that a person who has been made a partner in Slater and Gordon was a person of some competency. I presume that Slater and Gordon know enough about the law not to appoint imbeciles or fools but are appointing people who are capable.

In Victorian Parliament, on 12 October 1995, the Minister for Industry and Employment said:


I understand the AWU is still receiving bills for strange items ordered by Mr Wilson. All attempts thus far to find him have come to nothing. What did Mr Wilson do when he found out that his actions had been discovered? The first thing he did was to seek legal advice from the union's solicitors, none other than Slater and Gordon. From whom did he receive that advice? One Julia Gillard.

.....another article, from the Sydney Morning Herald of Tuesday, 30 July 1996, by Murray Hogarth:


Between 1992 and 1995, about $370,000 flowed through two Perth-based accounts - operated in the name of the "AWU Workplace Reform Association Inc" - which, until last month, had never been heard of in the AWU's national offices in Sydney.


We have to find out who set these accounts up.


We have to find out whether the person who set these accounts up had told the Australian Workers Union that they were setting up these accounts. We have to find minutes to prove that the accounts that were being set up were under the instruction and the auspices of the Australian Workers Union and not set up outside. Any competent solicitor would start asking those questions. So who is setting these up? What is the purpose of these accounts? What is the source of these funds? What is the application of these funds? That is what a person who was competent would ask. Most certainly it is what a partner of a law firm would ask. They would definitely be the questions that a partner of a law firm would ask, especially if they were the ones drawing up the accounts.

We KNOW who set the accounts up!


Speaking in Parliament on Thursday, (former attorney-general, Robert) McClelland revived memories of old allegations of union corruption involving Gillard's former partner, Bruce Wilson. The pair lived together in Melbourne in Gillard's pre-parliamentary career when she was a labour lawyer with Slater & Gordon and Wilson was Victorian secretary of the Australian Workers Union.

Speaking of the need to strengthen protections against union corruption such as the case of the Health Services Union, McClelland referred repeatedly to the allegations against Wilson

Gillard's then-partner was accused in the Victorian Parliament in 2001 of misappropriating about $500,000 of union money, including $102,000 spent on home renovations. Gillard has repeatedly denied benefiting from the money and rejected any other involvement.

Kangaroo Court revived the matter in 2011:

Julia Gillard had criminal allegations made against her in 1995 when she was accused of helping her boyfriend steal over $1,000,000 from the Australian Workers Union (AWU) and helping him spend the money on such things as her personal home renovations and dresses.

Julia Gillard has never denied helping him rip off the $1,000,000 plus dollars, what she has done is denied doing it knowingly. Her part was helping set up an account called the “AWU Members Welfare Association No 1 Account” and possibly other accounts that the money was laundered through when she was a lawyer working for Slater and Gordon who were the solicitors representing the Australian Workers Union.

Our Prime Minister set up accounts that allegedly siphoned off union funds to her then lover. She has responded that she (34 and a partner in a law firm) was young and naive.

Does the Labor Party care about the misuse of funds of Union members?
Posted by Geoff on June 26, 2012 No comments:

Should we rely on computer models or examine real world data? Well, according to a study by a team from the Norwegian Polar Institute and released  by the American Geophysical Union (AGU) and published in Geophysical Research Letters, the models have been shown to be (surprise, surprise!) wrong.


Twenty-year-old models which have suggested serious ice loss in the eastern Antarctic have been compared with reality for the first time - and found to be wrong, so much so that it now appears that no ice is being lost at all.

From the AGU Press release:


From the “seal data”, the scientists accumulated enough knowledge concerning the area’s water circulation and how it changes over the seasons to construct the most complete picture of what and how the Fimbul Ice Shelf is melting from the bottom up.


It turns out that past studies, which were based on computer models without any direct data for comparison or guidance, overestimate the water temperatures and extent of melting beneath the Fimbul Ice Shelf. This has led to the misconception, Hattermann said, that the ice shelf is losing mass at a faster rate than it is gaining mass, leading to an overall loss of mass. The model results were in contrast to the available data from satellite observations, which are supported by the new measurements.