The unreliable source of information Wikipedia defines a troll:


In Internet slang, a troll is someone who posts inflammatory, or off-topic messages in an online community, such as an online discussion forum, chat room, or blog...

This blog has attracted its own troll.  Unlike the loose definition from Wikipedia, our own in-built troll has created his own troll blog.

It is full of warped statements and untruths.

As an example of an untruth or contradictory statement, the troll wrote, in answer to a comment on this blog:

"Nice wordplay on the monika (sic). A little juvenile but still clever. "

However, when he made a post on his troll blog, he wrote:


My initial thought was, “Okay, this person is obviously pretty childish if they think that’s clever.”


Well done troll! You even contradict yourself in your own post. A little thought before you post would be appreciated.

He then went on to say that "No-one is saying that CO2 emissions are causing runaway global warming." Hypothesis denied.

That should be it! He is on our side. Case closed. Perhaps he will join our party and help the fight for the good guys against the liars from the climategate CRU.

Putting that aside, the troll has now attacked a respected science professor, Bob Carter. Now, the troll maintains he is also a scientist but hides behind a pseudonym which is something like eyespiknonsense. I will not give his troll blog air by giving the actual name. If he wants to defame (another?) scientist, he should at least have the guts to mention his real name.

Then he attacks Bob's opinion on peer review.

Anyone who has scanned the ClimateGate emails knows that there was a coterie of scratch-my-back peer reviewers and also a sinister mob seeking to stop anti AGW papers from being published. The treatment of NZ Scientist Chris de Freitas was abhorrent.

Troll, look at the science. Open up your mind. Better minds than yours have realised that AGW is a hoax. Think of people like ex-NASA's Ferenc Miskolczi and  his country mate Miklos Zagoni -and David Evans and Joanne Nova. All were fervent AGW pushers until they awoke to the truth.

Look at the data - the uncorrupted data. Temperature has NOT risen for years.

The troll is not only a liar but confuses consensus with science. Poor deluded troll. 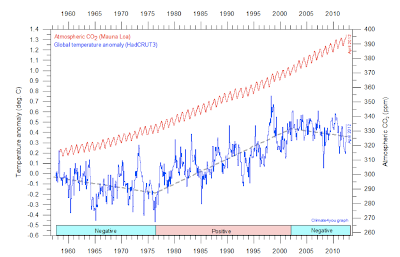 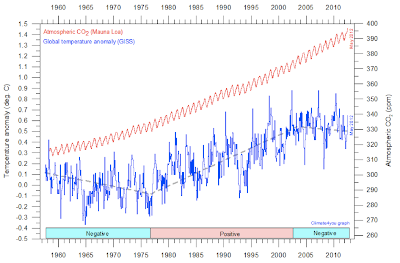 Even Hadcrut4 shows no warming for ten years:- 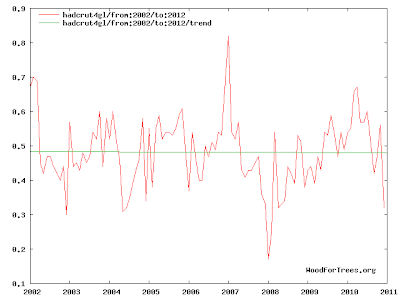 The troll has made an unusual statement in response to this post:


Climate deniers are saying there can’t be any warming because the Earth is flat. No doubt Geoffrey you disagree with that statement so therefore you obviously accept the consensus position. Case closed.


Well, troll, Funny misuse of logic in those two sentences.

"Can't be any warming because the the Earth is flat..." That is just stupid. SO, I disagree with that statement.But to make that leap to accepting some unnamed consensus? Illogical.


And last but not least, Hadcrut 3. You do realise it has known cooling bias? Of course you do, Geoffrey. That is why you prefer it to the much more accurate Hadcrut 4. When you choose dodgy data to support your dodgy position…..

Dodgy data? From Hadley Climate Research Unit? Surely not!  Who would you recommend? Hadcrut 4? From the source of the other "dodgy data?"  Hmmm...

Here is a screen shot of the first comment that disappeared from the troll's blog(8:23 AM 25/6 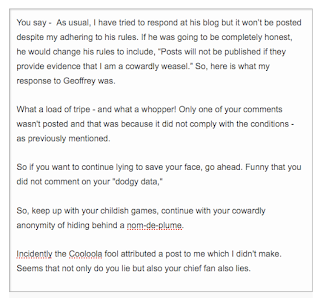 The Follow up (11:38AM 25/6) was a reposting of the above.Also disappeared from the coward's coven.

I didn't think to take a shot of the first this morning that disappeared but here is the second attempt at 6:16 AM 26/6 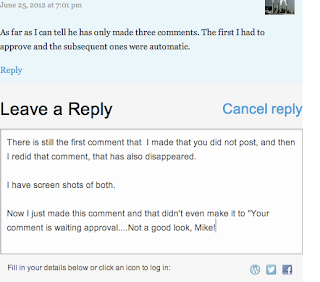 and just to show that it didn't even go to moderation, this is 4 minutes later:

So, the troll is blocking my comments. Is the troll a liar and a coward? I'll let the reader be the judge.


I  have a fair idea why the troll said with some confidence: "I don't think he'll be back!" From now on he will be right.

UPDATE (sigh)
Against my better judgement I revisited the troll's diatribe blog and found that he had written:


As usual, I have tried to respond at his blog but it won’t be posted despite my adhering to his rules....

The lying weasel troll  posted ONLY ONE comment here that has not been published. Only one.
That comment did not conform to the simple rules.   I have tried to post more than four times (see above) on his bog er sorry, bLog (not funny just a copy of a stupid comment from his ispiknonsense blog)

No matter how many times you say - 'I know your  (sic) reading this'  I won't be. It will only be your cramped coterie of cheating chums.


The “failure” of Rio+20 is a cause for celebration, even if you can’t afford the champagne and foie gras that ecocrats served themselves as their hopes for “Sustainia” retreated into the policy fog. A mostly “B” list of government leaders (No Barack Obama. No David Cameron. No Stephen Harper. No Angela Merkel) was set to adopt a pablum-filled 283-point “vision” on Friday that was finalized before they arrived.


Significantly, the mother and father of sustainable development, Gro Harlem Brundtland and Maurice “Chairman Mo” Strong, carped — or should that be gro-aned and mo-aned — from the Rio sidelines. Ms. Brundtland was the figurehead of the 1987 Brundtland report, which spilled sustainable development all over the policy map, while Mr. Strong orchestrated the 1992 Rio conference, which the current 50,000-strong flop is intended to commemorate.

Oh, now I'm not the kind of person for a passion for dancing and romancing, but - what a pity that I can't afford the champagne and foie gras!