Previously this blog wrote of the Death at Durban. However the hoax pushers refused to lie down and die and so things moved on to Rio.

Now, even the pushers are disappointed with the 50 page international "agreement."


The summit, known as Rio+20, was supposed to hammer out aspirational, rather than mandatory sustainable development goals across core areas like food security, water and energy, but the draft text agreed upon by diplomats failed to define those goals or give clear timetables toward setting them.

It is 'telling that nobody in that room adopting the text was happy. That's how weak it is," the European Union's climate commissioner Connie Hedegaard said on social network Twitter. The text "has too much 'take note' and 'reaffirm' and too little 'decide' and 'commit'. (The) big task now for UN nations to follow up" on this, she added.


The Rio sustainable development summit will not "make an inedible mark on world history", Prime Minister Julia Gillard conceded as she arrived at the meeting.

More from the SMH:


The Australian Greens are urging Prime Minister Julia Gillard to strengthen the "toothless" draft text of a global environmental agreement to be approved by leaders at a United Nations summit.

WWF director-general Jim Leape said it was a "colossal failure of leadership and vision from diplomats".

Perhaps it is time for the leaders to do what the majority of the people have already done and wake up to the hoax that is manmade CO2 emissions causing runaway warming.


Green guru James Lovelock was right. He warned last week that “the green religion is now taking over from the Christian religion.”

Now at the U.N. Earth Summit, even the image of Christ has been made a forcible convert to the eco-faith, as the city of Rio is bathing the iconic statue of Christ the Redeemer (Christo Redentor) in green light.


The great global warming scare has long been dying on its feet, but that sad fiasco of a conference in Rio last week saw it finally dead and buried.

Should Peer Review be reviewed? 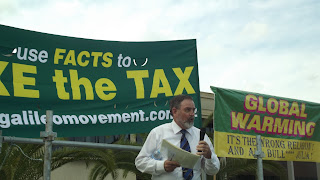 The head of the Intergovernmental Panel on Climate Change (IPCC) has referred to its work as the gold standard, based on its oft-made claim that it only surveys work published in peer-reviewed professional research papers.

Interestingly, Albert Einstein’s famous 1905 paper on relativity was not peer-reviewed. It is therefore quite clear that peer-review is not a precondition for excellent, indeed epoch-making, scientific research.

Bob then goes on to describe the peer review process.


In essence, then, peer-review is a technique of editorial quality control. That a scientific paper has been peer-reviewed is absolutely no guarantee that the science it portrays is correct. Indeed, it is the very nature of scientific research that nearly all scientific papers require later emendation, or reinterpretation, in the light of new discoveries or understanding.
Scientific knowledge, then, is always in a state of flux. Much though bureaucrats and politicians may dislike the thought, there is simply no such thing as “settled science,” peer-reviewed or otherwise.

Many scientific journals, including prestigious internationally acclaimed ones, have now become captured by insider groups of leading researchers in particular fields. Researchers who act as editors of journals then select referees from within a closed circle of scientists who work in the same field and share similar views.

The Climategate email leak in 2009 revealed for all to see that this cancerous process is at an advanced stage of development in climate science. A worldwide network of leading climate researchers were revealed to be actively influencing editors and referees to approve for publication only research that supported the IPCC’s alarmist view of global warming, and to prevent the publication of alternative or opposing views.