A comment was made on this blog previously by "anonymous." Anonymous describes himself as a scientist who does field work. As he refuses to disclose his "field" of expertise, I can only surmise that his field work must be picking cherries as he dismissed anything written in the field of climate change not written by "climatologists."  He wrote


"...because he is famous and an expert in other areas, that somehow qualifies him as an expert on climate, which of course is ridiculous."


So what the CSP (he means the NO CARBON TAX climate sceptics (NCTCS) party ) are (sic)  doing is relying on non-specialists, more often than not with vested interests, to give them information. I can only wonder, if they will apply the same logic if their house needs rewiring or if they need to know how to treat brain cancer? Rather then take the advice of specialist oncologists will they instead seek advice from the retired veterinarian up the road? After all, he’s a doctor too.

So, you can only rely on "climatologists," scientists whose field is climatology.

He therefore would dismiss (as we do) the IPCC assessment reports -exposed by Donna Lafromboise's “The Delinquent Teenager Who Was Mistaken for the World’s Top Climate Expert“ a book that describes how the IPCC includes green lobbyists and others too biased, or too misinformed to have any place on such an important UN body.


“This expose, by an investigative journalist, is the product of two years of research. Its conclusion: almost nothing we’ve been told about the IPCC is true.“

He would also dismiss:-

Burt Rutan is an American aerospace engineer noted for his originality in designing light, strong, unusual-looking, energy-efficient aircraft. He is famous for his design of the record-breaking Voyager and SpaceShipOne. His flying car, the hybrid-electric BiPod is pictured below.


Thanks to the ultra-efficient Voyager, the hybrid-electric BiPod and the fact that he is in the process of building a 31-acre photovoltaic solar farm in the California desert, Mr Rutan is occasionally mistaken for an environmentalist. It is an accusation he is quick to deny. “I drove an electric car for seven years because of its advanced technology, not because I have any concerns about energy resources,” he says. “I have none at all. And when environmentalists say that global warming is dangerous, unprecedented and that we’ll have a tipping point for atmospheric carbon dioxide, it’s just nonsense.” 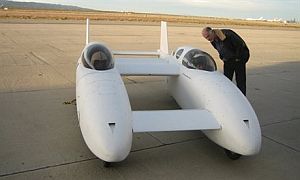 CFACT's Craig Rucker at the first day in Rio.

I probably won't fly down to Rio; but, then again I just might.