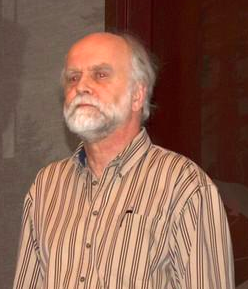 In theory at least Oregon State University (OSU) seems to be a bastion of academic freedom, diversity, and tolerance. A wide range of ideas are openly discussed. The most viable rise to the top and the least viable fade away. But it is all a fairy tale, because OSU operates under a politically correct regimen that dictates what is acceptable to say and what is not. Transgressors who dare to be different are eventually weeded out so that the campus maintains its ideological purity.


OSU is not yet as swift or efficient as the Soviet system when Joseph Stalin was trying to quash dissent among biologists who refused to go along with Trofim Lysenko. If warnings to compromise their integrity were not followed, Stalin simply had biologists shot. That quickly thinned the ranks of all biologists and persuaded the remaining ones to comply with Stalin’s wishes. Of course, it also destroyed Soviet biology, because Lysenko was pedaling nonsense. And Russian biology has never recovered.

We learned over the weekend that chemist Nickolas Drapela, PhD has been summarily fired from his position as a “Senior Instructor” in the Department of Chemistry. The department chairman Richard Carter told him that he was fired but would not provide any reason. Subsequent attempts to extract a reason from the OSU administration have been stonewalled. Drapela appears to have been highly competent and well-liked by his students. Some have even taken up the fight to have him reinstated.
What could possibly have provoked the OSU administration to take precipitous action against one of their academics who has been on their staff for ten years, just bought a house in Corvallis, and has four young children (one with severe medical problems)? Dr. Drapela is an outspoken critic of the theory of Anthropogenic Global Warming, the official religion of the State of Oregon, the Oregon Democratic Party, and Governor John Kitzhaber.

Five years ago, Oregon State Climatologist George Taylor went around quietly saying that he was not a believer. Then Governor Ted Kulongoski and many faculty at OSU including Dr. Jane Lubchenco made life impossible for Taylor, and he retired. (Lubchenco is now head of NOAA in the Obama administration.) Under those currently in charge, OSU climate research has grown to be a huge business, reportedly $90 million per year with no real deliverables beyond solid academic support for climate hysteria. A small army of researchers ponder the effects of Global Warming on all sorts of things from tube worms living along the Oregon Coast  to butterflies inland. When the climate refuses to warm (as it has for the last twenty years), they just study ‘warming in reverse!’ Most of us call that “cooling,” but they are very careful not to upset their Obama administration contract monitors with politically incorrect terminology.

Skeptics of Global Warming who oppose the OSU approach and oppose the politicians who make it all possible but do not work for OSU also find themselves attacked. Dr. Art Robinson who is running against Peter DeFazio for an Oregon Congressional seat found three of his children under attack at OSU. All were attempting to obtain advanced degrees in the Nuclear Engineering Department and were threatened with dismissal. Because Robinson fought back, we understand that the OSU administration backed down.

As to the latest victim of political correctness at OSU, Dr. Nickolas Drapela gives us an excellent synopsis of what is going on:


“The fact of the matter is that it is now two weeks since I was fired and no one has had the cajones or the common courtesy to even tell me why. I have spoken with the Dept. Chair (Rich Carter) who fired me, and he refused to tell me why. I spoke to the Dean of Science (Vince Remcho) and he couldn’t tell me why. I spoke to HR who set up a meeting with me, then cancelled it an hour before. Then I went to the Vice President of Academic Affairs (Becky Warner) and she sent me back to Rich Carter, the chemistry chair."

It’s just a sad, sad state of affairs that an institution like OSU would fire a good employee for (ostensibly) no reason and then run around and hide from the person they fired. I had stellar teaching evaluations, I won College of Science awards for teaching, and published textbooks. My class sections were always full and I was well-liked by students (see ratemyprofessors.com). I was doing my job very well. But I guess I didn’t march in step with their philosophies.

There were quite a few student protests over this at OSU (Barometer, Facebook, etc.) but to no avail.
I was given no severance and had no warning this was about to happen. In fact, I was lured into the chair’s office under the guise of a fallacious story before being fired.

As you know, I was probably the most visibly-outspoken critic of the Global Warming doctrine at OSU. I gave several public talks on the topic and did research in the area which I regularly posted on the web. I was also on a few talk radio shows in the area. I think they finally just said, we can’t have this.

Can it be that a university whose motto is “Open minds. Open doors” cannot abide even one faculty member who disagrees with their dogma? I suppose I am too naive, but I’m still reeling from it. Unbelievable.

I should say that they regularly read all my email communications, which is why I am writing from this private email address. That has been going on for quite some time now.

As far as my options at this point, like I said I haven’t even really grasped what has just happened. I don’t know what I’m going to do, or what options I have yet. I’m sure OSU wants their story to be tight and perfectly identical among all administration before coming out with an official reason why I was fired, hence the long wait and refusal to speak to me.

I truly thank you for your concern, and I hope there is some recourse, even just for the sake of exposing what is happening at OSU.”

In a separate e-mail Drapela went on to say:


“Thanks so much for your support and your concern. That’s really nice. My students were all really upset about it. They started an email writing campaign to have me re-hired but I guess no one cares what they think."

I find that the people who want to keep things secret all the time are usually the people that have something to hide. It is certainly ok by me for you to disseminate this story. But I’m sure OSU would be horrified.

"I’m not sure how I will support my family at this point. We just bought a house in Corvallis. I have four kids, one of whom has a rare, blood disorder and requires regular trips to Doernbecher’s Children’s Hospital for treatment. Now we will be without health insurance.”

We can only speculate as to how the decision to fire Drapela was made. Unlike the decision to force Taylor out (which came from the governor’s office), this decision was likely internal to OSU with the implicit backing of Governor Kitzhaber and NOAA administrator Lubchenco. I would suspect that Dr. Phil Mote (Director of their Climate Change Research Institute) had a hand in the decision, because he has previously been highly intolerant of those who oppose his ideas and could potentially threaten his business empire.

Santer is the Man

Santer is the Man.

by Anthony Cox
I recently wrote this response to Naomi Oreske’s panegyric about Ben Santer the scientist. 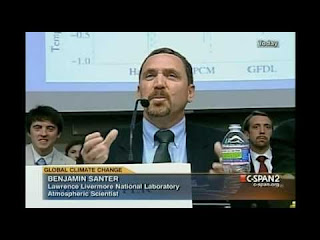 Santer had been very busy making sure the scam of AGW has the requisite ‘scientific’ evidence to keep the money pouring in. His specialty had been the Tropical Hot Spot, that mythical Holy Grail for AGW science which is yet to be found.

Now Santer has turned his attention to the heating of the oceans, Ocean Heat Content [OHC] in a new paper co-authored by him and his Australian brethren, including John Church of the CSIRO.

In interviews with the AGW friendly ABC, Dr Church makes no bones about it, this paper on OHC is:

the most comprehensive study of changes in ocean heat content to date by quite some margin.

And the new paper also:

has allowed the group to rule out that the changes are related to natural variability in the climate system.

The AGW scientists love OHC; the oceans are so big you can hide anything down there, including Trenberth’s“missing heat”, and the lack of warming in the atmosphere for the last 15 years. And the AGW models will always find it for you.
But right at the start of the new paper we see the usual lacuna between those models and reality. Santer and his buddies acknowledge:

The infilling method of DOM employs statistics of observed ocean variability estimated from altimeter data. We compare the spatially complete infilled estimates (1TIF) with subsampled 1T data (1TSS) restricted to available in situ measurements (see Methods). Not surprisingly, the 1TSS variability in Fig. 1b is greater than that of 1TIF, particularly at the times/locations of the sparsest sampling (early in the record and in the southern oceans; Supplementary Fig. S1).\

The “infilled estimates” are the models and the “subsampled data” is the real stuff; and the difference between them is greater than the alleged temperature increase! That is, the temperature variation, up and down, in the actual measured ocean, the bulk of it, the Southern Ocean, is both too sparse to base any conclusions on and inconsistent with how the models have developed trends.

The paper does concede that measurement of OHC has been subject to problems in the past. This is an understatement. In reality accurate measurement of OHC only began in 2003 with the ARGO network and even this sophisticated system, which supposedly overcame the “biases” of previous measurement regimes, is incredibly sparse and hardly representative.

The fact is that the measurement of OHC is subject to the same modelling biases as every other bit of evidence to support AGW. The temperature record of OHC saw a remarkable jump at the time of the transition to the ARGO system as this NOAA graph shows: 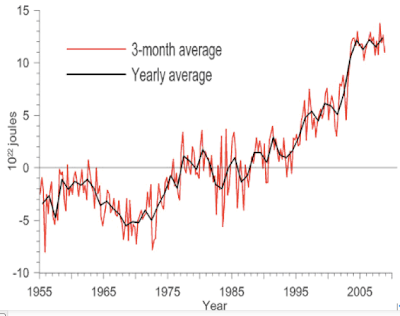 As is apparent there is a huge jump at the beginning of 2003 when the ARGO system was introduced. David Stockwell has calculated that this jump has a probability of being real of 0.001; in other words it is an outlier reflecting some problem with coordinating the data during the transition to the ARGO system.

Santer’s paper deals with the top 700 meters of the ocean and it is this part of the ocean which deals with most the variation in OHC. Given this it is extraordinary that the OHC since the most accurate measurement was introduced in 2003, has been basically flat and far less than the model projections: 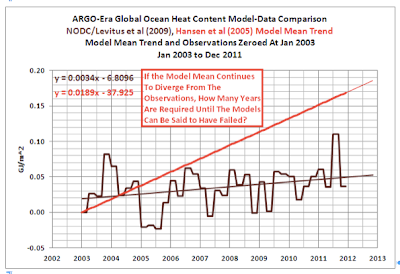 These are the same models Santer is now using to tell us that the OHC is increasing and it’s the fault of human emissions of CO2 and there is a “human-induced fingerprint” in the oceans.