How to warp a generation's brains 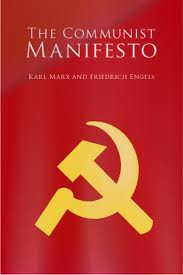 Extracts from the video -below - of a former KGB agent Yuri Bezmenov  revealing how the minds of Americans have been demoralised. The same demoralisation has been warping the minds of Australians.


Only 15% is spent on Espionage as such, the other 85% is a slow process which we call either ideological subversion or active measures…or psychological warfare – what it basically means is to change the perception of reality…to such an extent that despite their abundance of information, no-one is able to come to sensible conclusions…..it’s a great brainwashing process…divided into four basic stages

Our schools have now been dumbing down students for around twenty to thirty years - or perhaps two generations.

Let's hope and pray that we can. We must if a rational thinking society is to survive.

How to warp the brains of a generation...

A person who is demoralized is unable to assess true information – the facts tell nothing to him – even if I shower him with information; with authentic proof with documents, with pictures,…..

If you follow the blogs, read the comments of the demoralised brains of the comment makers, it doesn't matter what evidence is presented, their brains have been so demoralised that they cannot see reason.

Take Anna Rose, in the ABC's recent travesty "I can change your (demoralised) mind about climate."

Link to transcript referred to below -Conversation between Anna Rose of the Australian Youth Climate Coalition and two scientists, husband and wife team David Evans and Joanne Nova -PDF.

Evans and Nova were, until 2006, in the warmist camp. Then David realised that the evidence didn't add up and it took him a while to convince his Green Party card carrying member wife that the evidence wasn't there.

Anna: You think it's the sun that causes climate change?

Jo: We think that there's a lot of other factors that need to be considered.

Jo: The IPCC does not include any solar magnetic affects in any of its models. This enormous impact and the results have just come out of CERN recently support it. The empirical evidence suggests that there's a connection between sun spots and the climate but we're not saying - we don't know what causes climate change. We're simply saying there's a lot of other factors and the models ignore them all and then say yes, well we looked at everything and we couldn't explain the warming except for CO2 in our models. It's argument from ignorance, it's a logical fallacy.

Anna: If you're going to say that the majority of the scientific establishment is wrong, that NASA's wrong, that every academy of science is wrong -

David: We're not saying that at all.

If Anna had a brain that was working, she would have seen that Joanne had been a very similar idealogue,


When Joanne told her: "I was actually a member of the Australian Greens, it's the only political party I've ever been a member of so I'm like you, Anna in that I am concerned about the environment, I'm concerned about doing things sustainably. I worry about the country that we leave for our kids and, you know, I applaud you for going out there and doing something to follow what you believe in.

I mean congratulations, if only everyone was as active in doing things to make the place - the world a better place and I even spoke on ABC radio about how we should be concerned about carbon dioxide and the feedback effects, as the ocean warms it will release more CO2." 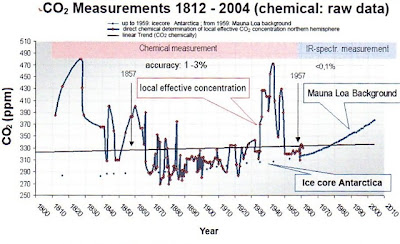 Dr Tim Ball writes:
I’ve told this story before but it requires repeating because of awareness of climate science corruption. Even skeptics realize claims of incompetence are inadequate. Official Intergovernmental Panel on Climate Change (IPCC) climate science was completely orchestrated for a premeditated result. T.R.Wigley’s 1983 paper “The pre-industrial carbon dioxide level” was pivotal in the evolution of climate science corruption. It was a flawed paper that cherry-picked data to claim pre-industrial CO2 level was 270 ppm.


“Since 1812, the CO2 concentration in northern hemispheric air has fluctuated exhibiting three high level maxima around 1825, 1857 and 1942 the latter showing more than 400 ppm.”

Above is his plot comparing 19th century readings with ice core and Mauna Loa data.


The ice core record is shown as a smooth curve achieved by eliminating extreme readings and applying a 70 year smoothing average. Eliminating variability is done with the Mauna Loa and all current atmospheric readings, which can vary up to 600 ppm in the course of a day. Information is lost with smoothing. Elimination of high readings prior to smoothing makes loss greater. Statistician William Briggs says you never smooth a time series.


“Mauna Loa does not represent the typical atmospheric CO2 on different global locations but is typical only for this volcano at a maritime location in about 4000 m altitude at that latitude.”


On one of the blogs pushing the Alarmist line of the hockey team a comment appeared on a post about a paper by Tim Curtin on 12th May:


But if you want to know from where he might otherwise have funded it, you could probably start with the Australian Climate Sceptics party.
[For giggles don't miss this: http://theclimatescepticsparty.blogspot.com.au/2012/05/pre-industrial-and-current-co2-levels.html]


I added a reply something similar to this:


I am sure that one of the world's foremost climatologists, Dr Tim Ball, would get a giggle from that comment,

but, the moderators denied my right of reply and did not publish my comment.

And they call us deniers?

As treasurer of the NO CARBON TAX Climate Sceptics party, I can state that Tim Curtin received no funding from the party.