Tim Curtin’s just published paper (in The Scientific World Journal) uses econometrics to test various propositions underlying claims that observed global temperature change is mostly attributable to human-caused greenhouse gases, mainly carbon dioxide, and that although water vapour is recognized to be a dominant contributor to the overall greenhouse gas (GHG) effect, its effect is merely as a “feedback” from rising temperatures initially resulting only from GHGs and not at all from variations in the pre-existing natural evaporation that produces most atmospheric water vapour and rainfall.  The paper shows that global warming is not exclusively attributable to GHG like CO2, both because atmospheric water vapour existed before there were any significant increases in GHGs or global temperature and also because there is no evidence that such increases have produced measurably higher volumes of evaporation. Thus reducing emissions of CO2 is unlikely to be the effective climate “control knob” claimed by NASA’s Hansen, Schmidt, and Lacis (2010).


Academic Editor: Donald H. Stedman
Copyright © 2012 Timothy Curtin. This is an open access article distributed under the Creative Commons Attribution License, which permits unrestricted use, distribution, and reproduction in any medium, provided the original work is properly cited.

This paper tests various propositions underlying claims that observed global temperature change is mostly attributable to anthropogenic noncondensing greenhouse gases, and that although water vapour is recognized to be a dominant contributor to the overall greenhouse gas (GHG) effect, that effect is merely a “feedback” from rising temperatures initially resulting only from “non-condensing” GHGs and not at all from variations in preexisting naturally caused atmospheric water vapour (i.e., [H2O]). However, this paper shows that “initial radiative forcing” is not exclusively attributable to forcings from noncondensing GHG, both because atmospheric water vapour existed before there were any significant increases in GHG concentrations or temperatures and also because there is no evidence that such increases have produced measurably higher [H2O]. The paper distinguishes between forcing and feedback impacts of water vapour and contends that it is the primary forcing agent, at much more than 50% of the total GHG gas effect.

That means that controlling atmospheric carbon dioxide is unlikely to be an effective “control knob” as claimed by Lacis et al. (2010). 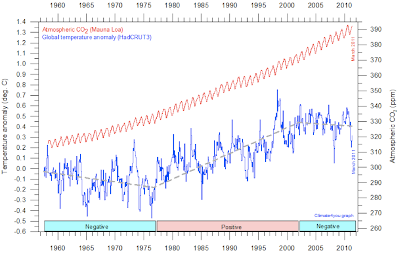 Physicist and meteorologist Klaus-Eckart Puls was interviewed by Bettina Hahne-Waldscheck of the Swiss magazine “factum“.

Puls: Ten years ago I simply parroted what the IPCC told us. One day I started checking the facts and data – first I started with a sense of doubt but then I became outraged when I discovered that much of what the IPCC and the media were telling us was sheer nonsense and was not even supported by any scientific facts and measurements. To this day I still feel shame that as a scientist I made presentations of their science without first checking it. The CO2-climate hysteria in Germany is propagated by people who are in it for lots of money, attention and power.

Climate change is normal. There have always been phases of climate warming, many that even far exceeded the extent we see today. But there hasn’t been any warming since 1998. In fact the IPCC suppliers of data even show a slight cooling.

he largest climate anomaly of the last 1000 years in the Northern Hemisphere was the Little Ice Age (LIA) from 1400–1850 C.E., but little is known about the signature of this event in the Southern Hemisphere, especially in Antarctica. We present temperature data from a 300 m borehole at the West Antarctic Ice Sheet (WAIS) Divide. Results show that WAIS Divide was colder than the last 1000-year average from 1300 to 1800 C.E. The temperature in the time period 1400–1800 C.E. was on average 0.52 ± 0.28°C colder than the last 100-year average. This amplitude is about half of that seen at Greenland Summit (GRIP). This result is consistent with the idea that the LIA was a global event, probably caused by a change in solar and volcanic forcing, and was not simply a seesaw-type redistribution of heat between the hemispheres as would be predicted by some ocean-circulation hypotheses. The difference in the magnitude of the LIA between Greenland and West Antarctica suggests that the feedbacks amplifying the radiative forcing may not operate in the same way in both regions.
Posted by Geoff on May 10, 2012 No comments: