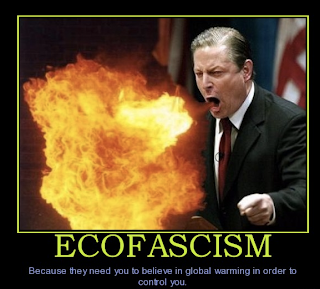 One of my favourite predictions of the future is the following:

A democracy cannot survive as a permanent form of government. It can last only until its citizens discover that they can vote themselves largesse from the public treasury. From that moment on, the majority (who vote) will vote for those candidates promising the greatest benefits from the public purse, with the result that a democracy will always collapse from loose fiscal policies, always followed by a dictatorship.
The average age of the world's greatest democratic nations has been 200 years.
Each has been through the following sequence:


From bondage to spiritual faith.
From faith to great courage.
From courage to liberty.
From liberty to abundance.
From abundance to complacency.
From complacency to selfishness.
From selfishness to apathy.
From apathy to dependency.
And from dependency back again into bondage.


Can we escape from this fate?

This is from a letter to an American friend by Lord Thomas Babington Macaulay in 1857.

He could not have known it but a closely similar sequence followed in continental Europe immediately after the "selfishness" which led to the First World War and led to the collapse of European economies. The dictatorship that emerged in Italy was called "Fascism. and this name can be applied to the others. But in Germany it may be "Nazism" and in Russia "Stalinism" which is their local form of Communism.

The sequence described by Macaulay has re-emerged and the last stages are taking pace before our eyes. Western Powers are failing under a load of debt, compounded of abandonment of economic progress for enrichment of the economy while the upper classes become richer. The emerging dictatorship is now to be applied on a global scale and much of the beginnings of the programme have already been applied. Many of us already have to promote  "conservation", "sustainability",  "biodiversity", and we reduce "emissions", promote windmills, solar panels, bicycle transport and saving "endangered species".  So-called "climate science" dominates our academic research budgets.

Democracy has been destroyed by takeover of the media, by advertisers and public relations "consultants" and "lobbyists", by making elections increasingly expensive to enter and distorting the rules so that they are a contest between individuals and not between policies.

The next stages are now emerging.

The British Royal Society has provided their programme here..

They place particular emphasis on the  increasing world population. They admit the fact that in western countries the population is falling and most of the increase comes from Africa and parts of India, so reduction is a matter of promoting contraception and empowering women in undeveloped countries, which they do actually recommend.

However, their "attack on poverty" does not include reducing the scandalous income disparity in western countries which currently cause poverty in these countries.  They concentrate on poverty in developing countries where they make some useful suggestions, but do not change the current trend which changes people into permanent social welfare beneficiaries and does nothing to provide jobs for the children that have been "saved" when  they mature.

They peddle the  myth that the ocean is being acidified. The oceans are firmly alkaline and are certain to remain so. Parts of the ocean actually emit carbon dioxide and so are already saturated and it does not seem to harm any ocean organisms. Slight expansion of these regions and evolution would cope with any increase in atmospheric carbon dioxide.

They go on about water supply, but do not understand that it is a matter of effective redistribution of the excess water which arrives somewhere every day from the heavens.

Their only interest in energy is in cutting carbon emissions or capturing them. No mention of frakking or the desirability of nuclear power. They want lots of biofuels and admit they put  up the price of food, but hope they will be grown on marginal land.

All this is comparatively mild compared with the guru recently interviewed by Kim Hill and appearing in the Auckland Writers and readers week, Chanran Nair, who has written a book called "Consumptionomics" and has a website Here.

Consumptionomics argues that the blinkered conventional view needs to be replaced by a more rational approach to such challenges. If Asians were to achieve consumption levels taken for granted in the West the results would be environmentally catastrophic across the globe. Needless to say, it would also have significant geopolitical impacts as nations scramble for diminishing resources. Asian governments and leaders find themselves with a dilemma. The solutions will entail making sensitive political choices and adopting certain forms of government to effect a fundamental change of direction. If Asia is willing to take on this responsibility it will help to save the planet whilst reshaping capitalism.

He purports to be an economist, and he insists we must all follow his orders. They include huge prices for his idea of environmental restoration particularly the hidden cost of roads. He would drastically ration the permission to  possess a car, presumably confined to the rich and beautiful..

The Internet commentators love this book which can be obtained on Kindle for $10.  It is approved by the Lee Kuan Yew Foundation and there are already the beginnings of political movements ready to impose these restrictions on us all in Europe and in the US. Singapore, Russia  China and India are being pressurized to adopt its precepts, which could well be adopted by the United Nations in response to the insoluble debt problems of Western countries and the supposed pressure on "resources from the economic revival of Asia, South America  and Africa.
So Macaulay is once more vindicated. His last plea "Can We Escape" must exercise all those of us who really care for freedom, democracy, and honest science.

"To kill an error is as good a service as, and sometimes better than, the establishing of a new truth or fact" ~ Charles Darwin

Craig Thomson to move to the cross benches - the stench remains.

80% of the people think that  the stench will remain for Labor as Thomson moves to the cross-benches, whilst 90% of the people are calling for a new election. See polls below.) Meanwhile Michelle Grattan says that JULIA Gillard should consider falling on her sword for the good of the Labor Party.


Sky News sources report that embattled MP Craig Thomson will today announce he's quitting Labor and will sit on the cross bench as an independent in parliament. Mr Thomson will hold a news conference announce the move outside his electorate office in Tuggerah on the NSW central coast at midday (AEST).

If you can't stand the heat, get out of the kitchen, but only as far as the walk-in pantry, where you can still yell out your vote into the kitchen.

James Delingpole and The Precautionary Principle 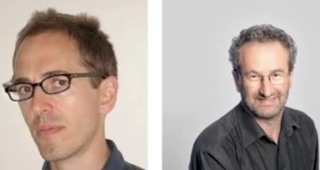 
"It’s about cost/benefit analysis, isn’t it….what if carbon dioxide is warming the planet at a catastrophic level….what if there are alien species out there hell-bent on destroying our planet…maybe we should spend billions of dollars building giant alien killers on every hillside...."


In this feisty interview he (Delingpole) takes on Jon Faine's ridiculous claims that the planet will die unless we do as the environmentalists say. James Delingpole points out that allowing them to install a socialist world government that kills industry as well as our economy is not a good idea and is nothing more than a gesture.

Climate Change - What the ABC edited out

The curiously titled Australian ABC programme "I Can Change Your Mind About Climate" was seriously edited to skew toward the alarmist hoax on the man-made global warming debate.. They edited out the science from the sceptics' side and actually showed no science from the alarmists' side.

Even the panel discussion after the video was skewed. As the UK Telegraph reports:


Oddly, however, on the Q & A panel show that followed, in which, naturally, sceptics were outnumbered three to one, it (James Lovelock's recanting) barely rated a mention.

Here was the scientist hailed as the godfather of the modern environmental movement admitting that he had over-egged the pudding on global warming.

The doomsday merchant who wrote in 2006: "Billions of us will die and the few breeding pairs of people that survive will be in the Arctic where the climate remains tolerable" has allowed the evidence to change his mind. Hallelujah.

The Global Warming Policy Foundation also reports the omission by the MSM of a startling news story, the retreat of James Lovelock:

True to form, the overwhelming majority of press outlets failed to report the juiciest global-warming gossip of the week — a change of heart on the issue by one of the world’s most celebrated environmentalists. Also true to form, the press failed to report the most profound science story of the week — a startling theory that not only absolves humans of blame in global warming but sheds light on another taboo subject: shortcomings in Darwin’s theory of evolution.
Unlike their coverage of the political establishment or the corporate establishment, journalists will rarely be skeptical of the scientific establishment. Perhaps these ­unskeptical journalists don’t question scientists out of a belief that scientists’ pronouncements are free of the self-interest that taints politicians or corporations. Or perhaps these journalists, who are themselves rarely scientifically literate, blindly accept the views of scientific authority figures because they lack the training to assess rival views. Or perhaps these journalists fear being subjected to ridicule if they buck politically correct views. Whatever the reasons for journalistic deference to dogma in science, the victim is the information-consuming public, which at best is kept in the dark, at worst is duped.

A Poll on the ABC site that was showing 55% dismissive before the programme aired was taken down and re-started from zero after the programme. It is still showing - at the time of going to blog - 52% dismissive. 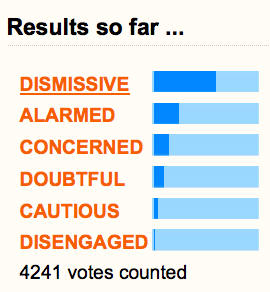 There is one question which asks:

and TCS blog answered extremely important. However, their analysis came up with:

PhDs Jo Nova and David Evans were severely edited. Both were on the alarmist side until they studied the data and realised that the sceptics were right.


In the interview we were on a mission to show the evidence the ABC won’t show — and of course, true to form, the ABC did exactly that, and didn’t show it. As David often points out, the mainstream media have never shown this data anywhere in the world, ever, even though it is extremely relevant, from mankind’s best and latest instruments, from impeccable sources, and is publicly available. Not to mention that billions of dollars of public policies depend on getting this right either.

David corrects the record with a series of you-tube presentations.