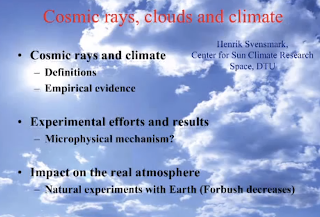 Henrik Svensmark is director of the Center for Sun-Climate Research at the Danish Space Institute.

Previously TCS blog has posted Prof. Dr Svensmark and his new theory - "The Climate is a result of changes in the clouds."

In this video, Henrik Svensmark is addressing the International Energy and Climate conference (EIKE) at Munich.

Today the Royal Astronomical Society in London publishes (online) Henrik Svensmark’s latest paper entitled “Evidence of nearby supernovae affecting life on Earth”. After years of effort Svensmark shows how the variable frequency of stellar explosions not far from our planet has ruled over the changing fortunes of living things throughout the past half billion years. Appearing in Monthly Notices of the Royal Astronomical Society, It’s a giant of a paper, with 22 figures, 30 equations and about 15,000 words. See the RAS press release at
http://www.ras.org.uk/news-and-press/219-news-2012/2117-did-exploding-stars-help-life-on-earth-to-thrive

Prof Svensmark's latest paper can be found at this link (pdf) ftp://ftp2.space.dtu.dk/pub/Svensmark/MNRAS_Svensmark2012.pdf


In Svensmark’s new paper an equally concise theory, that cosmic rays from exploded stars cool the world by increasing the cloud cover, leads to amazing explanations, not least for why evolution sometimes was rampant and sometimes faltered. In both senses of the word, this is a stellar revision of the story of life.

Here are the main results:
The long-term diversity of life in the sea depends on the sea-level set by plate tectonics and the local supernova rate set by the astrophysics, and on virtually nothing else.
The long-term primary productivity of life in the sea – the net growth of photosynthetic microbes – depends on the supernova rate, and on virtually nothing else.
Exceptionally close supernovae account for short-lived falls in sea-level during the past 500 million years, long-known to geophysicists but never convincingly explained..
As the geological and astronomical records converge, the match between climate and supernova rates gets better and better, with high rates bringing icy times.

GAIA's James Lovelock turns his back on global warming

Lovelock previously turned his back on "Gaia." Now, he is also turning his back on the alarmist hypothesis.

MSNBC, perhaps the most unlikely of news sources, reports on what may be seen as the official end of the man-made global warming fear movement.
MSNBC April 23, 2012: 'Gaia' scientist James Lovelock reverses himself: I was 'alarmist' about climate change & so was Gore! 'The problem is we don't know what the climate is doing. We thought we knew 20 years ago'
Contrast Lovelock's 2012 skeptical climate views with his 2007 beliefs during the height of the man-made climate fear movement. [ Flashback 2007: Lovelock Predicts Global Warming Doom: 'Billions of us will die; few breeding pairs of people that survive will be in Arctic' ]t


“Jim Lovelock has no university, no research institute, no students. His almost unparalleled influence in environmental science is based instead on a particular way of seeing things,” Oliver Morton, of the journal Nature wrote in Time.

Asked if he was now a climate skeptic, Lovelock told msnbc.com: “It depends what you mean by a skeptic. I’m not a denier."

Not one of us are deniers, James!


He said human-caused carbon dioxide emissions were driving an increase in the global temperature, but added that the effect of the oceans was not well enough understood and could have a key role.

“It (the sea) could make all the difference between a hot age and an ice age,” he said.
He said he still thought that climate change was happening, but that its effects would be felt farther in the future than he previously thought.

“The climate is doing its usual tricks. There’s nothing much really happening yet. We were supposed to be halfway toward a frying world now,” Lovelock said.

“The world has not warmed up very much since the millennium. Twelve years is a reasonable time… it (the temperature) has stayed almost constant, whereas it should have been rising -- carbon dioxide is rising, no question about that,” he added.

In an interview with the Guardian's Leo Hickman he discussed the corruption of data by the CRU:


I was utterly disgusted.

I have seen this happen before, of course. We should have been warned by the CFC/ozone affair because the corruption of science in that was so bad that something like 80% of the measurements being made during that time were either faked, or incompetently done.

Fudging the data in any way whatsoever is quite literally a sin against the holy ghost of science. I'm not religious, but I put it that way because I feel so strongly. It's the one thing you do not ever do. You've got to have standards.

Careers have been ended by this affair and the reputation of the institution [CRU] will go down for a while. It's sad because there are some good people there. They have to clean their house if they know people are behaving badly.

On the surveys showing that public trust with climate science is eroding:


I think the public are right. That's why I'm soft on the sceptics. Science has got overblown.

The Global Warming Policy Foundation also reports the omission by the MSM of a startling news story, the retreat of James Lovelock as well as shortcomings in Darwin's theory:


True to form, the overwhelming majority of press outlets failed to report the juiciest global-warming gossip of the week — a change of heart on the issue by one of the world’s most celebrated environmentalists. Also true to form, the press failed to report the most profound science story of the week — a startling theory that not only absolves humans of blame in global warming but sheds light on another taboo subject: shortcomings in Darwin’s theory of evolution.
Unlike their coverage of the political establishment or the corporate establishment, journalists will rarely be skeptical of the scientific establishment. Perhaps these ­unskeptical journalists don’t question scientists out of a belief that scientists’ pronouncements are free of the self-interest that taints politicians or corporations. Or perhaps these journalists, who are themselves rarely scientifically literate, blindly accept the views of scientific authority figures because they lack the training to assess rival views. Or perhaps these journalists fear being subjected to ridicule if they buck politically correct views. Whatever the reasons for journalistic deference to dogma in science, the victim is the information-consuming public, which at best is kept in the dark, at worst is duped.