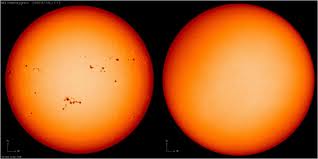 SEIJI TANAKA of The Asahi Shimbun reports:
The sun may be entering a period of reduced activity that could result in lower temperatures on Earth, according to Japanese researchers.

Officials of the National Astronomical Observatory of Japan and the Riken research foundation said on April 19 that the activity of sunspots appeared to resemble a 70-year period in the 17th century in which London’s Thames froze over and cherry blossoms bloomed later than usual in Kyoto.

In that era, known as the Maunder Minimum, temperatures are estimated to have been about 2.5 degrees lower than in the second half of the 20th century.

The Japanese study found that the trend of current sunspot activity is similar to records from that period.
The researchers also found signs of unusual magnetic changes in the sun. Normally, the sun’s magnetic field flips about once every 11 years. In 2001, the sun’s magnetic north pole, which was in the northern hemisphere, flipped to the south.

See also The Daily Galaxy  and the Daily Yomiuri


A research team led by Saku Tsuneta, a professor at the observatory, analyzed solar magnetic fields data using Hinode, an observational satellite, and confirmed that the polarity of the magnetic field at the North Pole began to reverse in July last year.

The current sunspot cycle has stretched for close to 13 years. A similar situation occurred in the 17th to 18th century, when the average temperature of the Northern Hemisphere decreased by 0.6 C. The research team believes the quadrupolar pattern also emerged at that time.