NSIDC claims that 1979 was the beginning of the satellite era for measuring ice, but this simply isn’t true. The graph below is from the 1990 IPCC report, and shows why NSIDC likes to use 1979 as their start date. 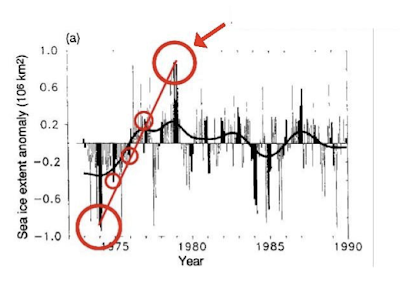 
The influence of the Greens is declining and Bob Brown has jumped from a sinking Titanic albeit a tiny titanic (official oxymoron).


In a column from the Sunday Telegraph Miranda Devine wrote a piece entitled, in my printed copy of the paper "A woodchip off the old block" and on-line "Beware a wolf in sheep's clothing."

On a rural slanted social website, Christine Milne opened up a group page to try to woo the people from the bush. However she underestimated us and she couldn't stand the heat and left the grounds. Now she is trying to whoop up country credentials again.


Good luck with that, considering greenies are the chief cause of grief to the bush.

Let us count the ways.

Greens never stop. And like an old fashioned protection racket, they wreck the joint and now they want to talk.


(Milne's) whimsical gardening blog, with its talk of gooseberry pie and luscious pictures of home-grown passionfruit is as unthreatening and cosy as politicians get.

For the sake of the future of the country, let's hope and pray we are seeing the end of the destructive, watermelon greens.
Posted by Geoff on April 15, 2012 2 comments:

This study highlights the fast recovery of the wintertime Siberian High intensity (SHI) over the last two decades. The SHI showed a marked weakening trend from the 1970s to 1980s, leading to unprecedented low SHI in the early 1990s according to most observational data sets. This salient declining SHI trend, however, was sharply replaced by a fast recovery over the last two decades. Since the declining SHI trend has been considered as one of the plausible consequences of climate warming, the recent SHI recovery seemingly contradicts the continuous progression of climate warming in the Northern Hemisphere. We suggest that alleviated surface warming and decreased atmospheric stability in the central Siberia region, associated with an increase in Eurasian snow cover, in the recent two decades contributed to this rather unexpected SHI recovery. The prominent SHI change, however, is not reproduced by general circulation model (GCM) simulations used in the IPCC AR4. The GCMs indicate the steady weakening of the SHI for the entire 21st century, which is found to be associated with a decreasing Eurasian snow cover in the simulations. An improvement in predicting the future climate change in regional scale is desirable.