TCS blog has just had a thought.
(At last, I can hear the deniers say.)

Tim Flannery has
So that makes Fearless Flannery (FF) The FFFFFFFFing King.

Where are you, Tim? The oceans are rising and your house soon will be underwater.

From the Sydney Morning Herald:

Outgoing Future Fund chairman David Murray has given a searing exit interview, blasting the carbon tax as the worst economic reform he has ever seen.
''If you want me to tell you my view, it is the worst piece of economic reform that I've ever seen in my lifetime,'' Mr Murray told ABC radio this morning.

Mr Murray, who is due to finish at the Future Fund next month, said that the ''notion'' of the carbon tax was not the issue, it was the ''consequences''.

He said it would raise costs within Australia and reduce Australia's competitiveness in energy exports. ''[It] therefore renders us less competitive in the future,'' he said.

THE Weekend Australian reported on March 24 that Port Macquarie Hastings Council was recommending the enforcement of a “planned retreat” because of an alleged danger from sea-level rise in the (distant) future.

The controversy has two main aspects: is the alarming rise in sea level projected by CSIRO reliable? And is moving people from near-shore sites the correct response

The CSIRO projection is extreme, but before explaining why, I would note that the world’s main source of alarmism is the Intergovernmental Panel on Climate Change. This is not really a scientific body but one that adjusts data and subjects it to mathematical modelling before passing its “projections” on to politicians

The CSIRO and Bureau of Meteorology, then further adjust data and produce models with even more extreme scenarios.

Professor Ollier explains that the IPCC has had various and decreasing estimates of seal level rises and the worst estimate in its last report was 59cm.


The CSIRO uses figures far in excess of even the IPCC, which until now were the greatest alarmists. In its 2012 report, State of the Climate, the CSIRO says that since 1993 sea levels have risen up to 10mm a year in the north and west. That means that somewhere has had a 19cm-rise in sea level since 1993. Where is this place? The European satellite says that sea levels have been constant for the past eight years.
How does the CSIRO arrive at its figures? Not from new data but by modelling. Models depend on what is put into them. For example a 2009 report, The Effect of Climate Change on Extreme Sea Levels in Port Phillip Bay, by the CSIRO for the Victorian government’s Future Coasts Program, based its model on temperature projections to 2100 of up to 6.4C. That compares with the most extreme, fuel-intensive scenario of the IPCC and implies unbelievable CO2 concentration levels in 2100 of about 1550 parts per million. 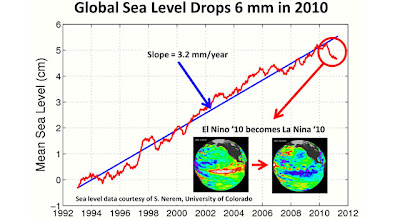 Quotes:
AJ: The IPCC – a totally discredited international policy agency known to flout conventional scientific procedures
RC The scientific basis for this sea level policy is quite simply nonsense.
AG The problem with the IPCC is that the scientists say one thing but the bureaucrats in the IPCC say something differently.
AG The record from Fort Denison we have just under a hundred years reliable record…and those shows a rise of 12cm
Prof Ollier quoted “If Tim Flannery is allowed to take his chance living on his Hawkesbury property near sea level, Port Macquarie’s retirees should be permitted to do so too. They should not be evicted to “save” them from a dire fate they will never see.”
AG The more recent trend (with sea level) is one of deceleration rather than acceleration
RC It is absolutely criminal that local councils under state government legislation are being required to plan on the basis of a computer model of global sea level. Global sea level has virtually nothing to do with what is happening on the Australian coast

See also: Is There Any Support In The Long Term Tide Gauge Data,