MSM and the truth

I wonder how the BBC environment correspondent Richard Black would report it if the Climatic Research Unit's Phil Jones were suddenly to confess that everything he'd said in the last two decades about the anthropogenic warming threat was total rubbish. I'm guessing something like: "Hero climate scientist announces glorious discovery: world saved, research at CRU now shows!"
I wonder how the New York Times, or the Guardian environment pages or Huffington Post would report it if NASA's James Hansen were to burst in with a machine gun and grenades at the next Heartland climate sceptics' conference and wipe out half the delegates. "NASA expert helps solve global overpopulation problem!", probably.
If you think I'm joking consider how all the above-mentioned organs responded to the story of Fakegate, in which climate activist Peter Gleick engaged in identity theft and used a forged document in order to smear the Heartland institute with a pack of lies. The way they covered it, you'd think the real villain of the piece was not Gleick but Heartland. One liberal commentator went so far as to suggest that the person who had faked the one (and only) incriminating document was none other than Heartland's president Joe Bast. Some kind of sinister, false-flag operation to make the environmental movement look bad, I suppose. (Yeah, like it needs any help on that score).

I wonder how the ABC would report it, if Tim Flannery were suddenly to confess that everything he'd said in the last two decades about the anthropogenic warming threat was total rubbish and that his trivial tome The Weather Makers was a work of fiction.

Would Tony Jones call a special Q&A with Bob Carter, Ian Plimer and Stewart Franks if the Bureau of Meteorology suddenly admitted that they had been falsifying the data for years. 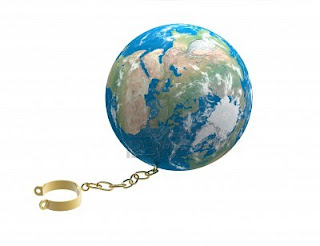 The Headline below says scientists? From this item it appears that they have emerged from their laboratories and have entered the field of politics.

Stronger global governance is needed to mitigate human impact on the earth’s climate and to ensure sustainable development, according to 32 scientists who published a paper in Friday’s issue of the journal Science.

In “Navigating the Anthropocene: Improving Earth System Governance,” (summary), the scholars argue that current institutions, including the United Nations, have shown themselves inadequate to the necessities now facing humanity.

In a podcast accompanying the article, lead author Frank Biermann, an environmental policy specialists from VU University in Amsterdam, cites climate change as the most prominent example of the failure of global governance to meet the needs of global society:
“It just takes a long time normally to get new agreements in place,” Biermann says. “One example is climate change where the first Framework Convention has been negotiated in 1992. And since then, there is no change in the emissions trends of major countries.