As I approach my 90th birthday next week I thought I would provide a more personal newsletter which summarized the state of play on Global Warming/Climate Change or whatever is the current euphemism to cover up the failure of the theory that the climate is exclusively controlled by human emissions of "greenhouse gases."

The pressure to accept this absurdity is slowly subsiding as it is becoming more and more evident to more and more people that the climate is not controlled in this way, and we must hand the whole subject back to traditional meteorology which has found that the climate is far too complicated to be decided by only one cause, and "greenhouse gases" becomes less prominent all the time.

I have distributed 128 "Greenhouse Bulletins" and 284 "Climate Truth" Newsletters  since 1991 by the Email service. I have dealt with every aspect of this problem by careful intellectual argument based on whatever reference material I could find.  I have a huge library of books, reprints and Xeroxes of articles which has overloaded all available space.

I used to make regular visits to Victoria University to read and copy articles. Now I have given up doing it. It is partly that almost everything is now available on the web, My network usually keeps me supplied, and research on the subject has ground to a standstill. The original pioneers are mostly gone and their stand-ins and replacements merely copy out and present the same old material.

I began believing it all and slowly reached my present position of total sceptic. There is hardly a single scientific, mathematical, or logical principle that they do not violate and they have done much to bring down the status and value of scientific research, together with the salaries and career prospects of scientists.

Today I was asked if I would buy a working website called CauseofGlobal Warming.com. They asked me because my first major publication was entitled "The Cause of Global Warming". It was published in 2000 in a peer-reviewed Journal (Energy and Environment) yet my biography by Wikipedia, which has recently been improved, still claims that I have never published on the climate in a peer-reviewed journal.

I have never had a personal website as I do not want the continuous responsibility and there are too many of them. However, I am forced to admit that a small number of the current blogs are currently leading the quest for demolition or control of the "Climate Change" bandwagon. It has now got to the stage that unless I catch a current controversy immediately it happens I get there too late and I end up commenting several hundred items from the top. If you judge success by the number of comments they attract I would identify the websites :Wattsupwiththat, JoanneNova and Climate etc. which might indicate that at last there is a distinctive feminine influence, from the last two. I may say that my website climatescience contains a great deal of  useful material but does not provide for public debate.

I have hoped that the depth of my own critical writings has helped in current understanding. My most thorough recent ones are my Global Scam and Greenhouse and its Effects reports much of which have appeared in these newsletters.  I would like to draw your attention to two recent contributions which make use of the unique facilities now available on the Internet.

This is the first time we have had a full professor of Climate Science present a fully reasoned case against the carbon dioxide theory. He presents evidence that increases of carbon dioxide come from natural sources, mainly from a temperature increase. The weakness of this argument is that the temperature is not increasing and the carbon dioxide is still rising. But since I question  all the data he uses for their representativity and for their accuracy (which is almost never estimated) he may still be right. However, the disadvantage of a video is that you cannot examine the arguments closely and this lecture does not seem to have been published yet. The questions from the audience displayed a great deal of naivety.

Another compilation which takes full advantage of the illustrative advantage of the Intenet is the brilliant lecture recently given to the Institute of World Politics in Washington by David Archibald :"The Four Horsemen of the Apocalypse" . Parts 1 and 2 are at

I met David during our attendance at the Bali Climate Conference. He is an expert on solar influences on the climate. In these two compilations he displays a masterly knowledge of almost every challenge that faces the world that you could think of. They include the future of climate, oil, atomic energy, food, population nuclear weapons and several others. He gives predictions of possible futures, many of disaster. I have some difficulty in disagreeing with any of it, mainly on whether his data are correct and whether science and tech\chnology might save the day.

I suppose I ought to write another book, but there are already too many of them and it seems at present all you need to do is to be patient and just wait. "Global Warming" will go away, but with how much intervening disasters caused by human stupidity?

"To kill an error is as good a service as, and sometimes better than, the
establishing of a new truth or fact."      Charles Darwin
Posted by Geoff on March 17, 2012 No comments: 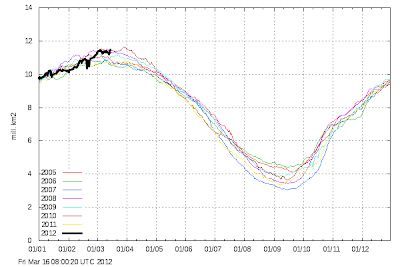 The Sea Ice Extent from the Danish Meteorological Institute.


Current Sea Ice extent
Total sea ice extent on the northern hemisphere since 2005. The ice extent values are calculated from the ice type data from the Ocean and Sea Ice, Satellite Application Facility (OSISAF), where areas with ice concentration higher than 30% are classified as ice.

The total area of sea ice is the sum of First Year Ice (FYI), Multi Year Ice (MYI) and the area of ambiguous ice types, from the OSISAF ice type product. However, the total estimated ice area is underestimated due to unclassified coastal regions where mixed land/sea pixels confuse the applied ice type algorithm. The shown sea ice extent values are therefore recommended be used qualitatively in relation to ice extent values from other years shown in the figure. In 2011 sea ice climatology and anomaly data will be available here.