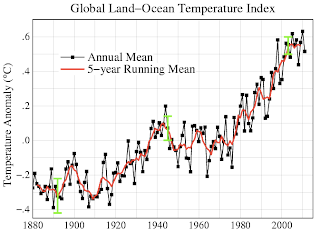 Amundsen navigated what is normally one of the most ice-choked parts of the Northwest Passage during the summer of 1905 - in ice free water.

Hansen says that 1905 was one of the coldest years on record. Hansen also tells us that polar amplification exaggerates warmth and cold in the Arctic.

The graph above isn’t worth the toilet paper it is printed on. It is a political document used to perpetrate fraud.

Memo to PM Gillard and her Green Gillard Government who appointed Tim (It hainta never to raining agin!) Flannery to "prophet her the weather" as Part-time Panasonic Climate Commissioner: (source)

Wunce they was a king, who hired him a prophet to prophet him his weather. And one day the king notioned to go fishin' but the best fishin' place was nigh onto where his best gal lived. So he aimed to wear him his best clothes.

So he called in his prophet and he says, "Prophet, is hit a comin' on to rain?" And the prophet says, "No, king, hit aint a comin' on to rain, not even a sizzle-sozzle," So the king he put on his best clothes and he got his fishin' tackle, and he started down the road towards the fishin' place and he met a farmer ridin' a jackass.

And the farmer says, "King, if ye aint aimin' to get yore clothes wetted, ye'd best turn back for hit's a comin' on to rain, a trash-mover and a gulley-washer." But the king drewed himself up and he says, "Farmer, I hired me a high-wage prophet to prophet me my weather and he 'lows how hit hain't a comin' on to rain not even a frog-duster."

So the king he went a fishin' and hit come on to rain, a clod-buster and a chunk-mover. And the king's clothes wuz wetted and they shrunked on him, and the king's best gal she seen him and laughed and the king was wroth and he went home and he throwed out his prophet and he says, "Farmer, I throwed out my other prophet and I aim to hire you to prophet me my weather from now on'ards."

And the king says, "Go home farmer, I'll hire me the jackass." And that's how it happened. And the jackasses have been a hold in' down all the high wage governmint jobs ever since!

h/t George H Taylor who  retired in 2008 after 19 years as State Climatologist for Oregon. He now operates Applied Climate Services of Corvallis, Oregon.
Posted by Geoff on March 16, 2012 1 comment:

To tax or not to Tax: That is the Question

PM Julia Gillard has been caught out lying many times. The biggest lie was the one that help to get the Green Gillard Government elected -


"There will be no carbon tax under the government I lead."

Now Ms Gillard has rejected claims small businesses will be hurt by the carbon emissions tax, as one of the nation's richest men flagged a High Court challenge against the incoming pricing regime.


She said the carbon tax would directly impact on fewer than 500 big companies, and consumers - including the 'mums and dads of the children on the bus' - would be compensated through tax cuts and payment rises.

'The policies and plans of the leader of the opposition are a disgrace for those working families because they are all about placating billionaires,' Ms Gillard said.
The coalition also seized on a report that shopping centre giant Westfield is introducing a charge clause in lease agreements for its 12,000 onsite retailers to offset the impact of the carbon tax.

'In every shopping centre, in every shop all around Australia, it is the small businesses that will pay and it is the mums and dads and pensioners who will pay,' opposition environment spokesman Greg Hunt said.

Sid Maher, in The Australian, reports that Ministers are panning Clive Palmer's carbon (dioxide) tax challenge in the High Court.


SENIOR Gillard government ministers have lashed out at billionaire Clive Palmer's proposed High Court challenge to the carbon tax, accusing the Queensland-based miner of having more money than sense.

Julia Gillard and Climate Change Minister Greg Combet attacked the proposal, adding to Wayne Swan's attack on Mr Palmer and vested interests in The Monthly, but Mr Palmer yesterday defended his right to mount the challenge

"They think I am a threat to democracy . . . well I think I am epitomising what democracy is all about," Mr Palmer said. "I have the right to appeal to the High Court on legal advice that I have received that the carbon tax is unconstitutional," he said. "I am very disappointed in the attitudes of Ms Gillard and Mr Swan."


The Prime Minister said the government had taken careful legal advice. "If Clive Palmer is going to take a court case and Tony Abbott is going to back him, well so be it. It will be part of their hysterical campaign against putting a price on carbon."


Clive Palmer has defended his move to mount a High Court challenge against the Government's carbon tax following criticism from the Government and some legal experts.
In a statement late yesterday Palmer said the lawsuit represented his democratic right to challenge the Government.

"I am very disappointed in the attitudes of Ms Gillard and Mr Swan. What are they worried about?  Maybe they think a successful challenge will expose them and this ill-conceived tax," he said.

"They think I am a threat to democracy...well I think I am epitomizing what democracy is all about."

"I have the right to appeal to the High Court on legal advice that I have received that the carbon tax is unconstitutional, that’s what the Constitution is set up for."