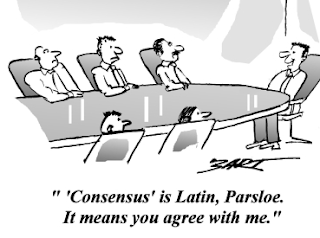 We really need the Ministry of Truth

Our Gracious Prime Minister Ms Julia Gillard and her Green partners have to consider the report of Finkie Pinkie nee Mr Raymond Finkelstein. Mr Finkelstein has proposed a Ministry of Truth....er.... sorry a...a new super-regulator called the News Media Council to control the truth in Media.

Perhaps he would welcome reports such as THIS that tell us that the Global Sea Level is Decreasing. (Back up Links - NASA; World Climate Report;) So perhaps he would then castigate some-one disseminating disinformation.

Now who could be disseminating disinformation?

The Australian Financial Review has Ms Gillard fighting AGW in this  report:


“We will fight climate change on the disappearing beaches and from every submerged rooftop, and I’ll raise the carbon price to $75 a tonne if I have to until these waters recede,” she promised.

Then, speaking of the floods, our PM made this amazing accusation that Tony Abbott was responsible. I thought that the Green Gillard Government controlled the environment.


Gillard was quick to point out that the floods were entirely due to the irresponsible negativity of long-term Opposition Leader Tony Abbott. “Not only is the mining boom responsible for the devastation wrought by our two-speed economy, with disgustingly overweight mining tycoons carrying on willy-nilly, gorging themselves on the fat of the land while working families battle the floods, but Tony Abbott himself continually attempts to create a two-speed democracy, where he disgracefully disagrees with everything the people want me to get on with doing.”

Yep! That's right. Not only is Mr Abbott responsible for the floods, but, although the economy has been riding on the miners' backs for a decade or so, these miners have been "gorging themselves on the fat of the land while working families battle the floods."

She says that Mr Abbott "disgracefully disagrees with everything the people want me to get on with doing.." Oh really? Has she seen the polls? Has she seen the lack of approval for her tax on colourless carbon dioxide?

In another amazing statement in this article written by Rowan (Rowin' up the creek without a paddle?) Dean:


Meanwhile, responding to criticism of Fair Work Australia’s reasonable work practices, popular chief Bernadette O’Neill explained that as a union official she had a duty of care to her membership to avoid co-operating with interfering police officers, according to accepted community expectations and long-standing practices that the trade union movement and Fair Work Australia are above the law.

Above the Law? Really? So, they are exempt from helping the police in an investigation? Are they working for the workers, the union members, or for the members of parliament and union officials who may have rorted union funds?


Night of Delight.
Craig Thopson's credit card and phone were used by some creep who left his office on the central coast of NSW and drove down to a brothel in Sydney. The assignation at the brothel was arranged on Craig's phone. The night of delight was paid for by Craig's union credit card. Subsequently, whoever the thug was who used Craig's phone and credit card returned phone and card to Craig.


“How can we help honest, hard-working Australians such as Craig Thomson prove that they’ve done nothing wrong whatsoever when the police keep butting in every five minutes? It’s a disgrace, and someone, preferably Tony Abbott, needs to be held to account.”

Hard Working Honest Australians would welcome a police enquiry to clear their name from such a heinous accusation.
Posted by Geoff on March 09, 2012 1 comment: