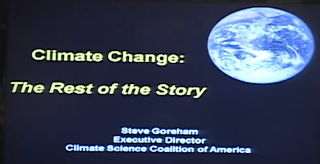 The Heartland Institute, a body that has been very successful in exposing the AGW hoax, is under attack from the blogs like Desmog; blogs whose raison d'etre is to try to besmear scientists and organisations that are revealing the truth of the hoax.

Heartland has issued this statement:

Yesterday afternoon, two advocacy groups posted online several documents they claimed were The Heartland Institute’s 2012 budget, fundraising, and strategy plans. Some of these documents were stolen from Heartland, at least one is a fake, and some may have been altered.

The stolen documents appear to have been written by Heartland’s president for a board meeting that took place on January 17. He was traveling at the time this story broke yesterday afternoon and still has not had the opportunity to read them all to see if they were altered. Therefore, the authenticity of those documents has not been confirmed. Since then, the documents have been widely reposted on the Internet, again with no effort to confirm their authenticity. One document, titled “Confidential Memo: 2012 Heartland Climate Strategy,” is a total fake apparently intended to defame and discredit The Heartland Institute. It was not written by anyone associated with The Heartland Institute. It does not express Heartland’s goals, plans, or tactics. It contains several obvious and gross misstatements of fact. We respectfully ask all activists, bloggers, and other journalists to immediately remove all of these documents and any quotations taken from them, especially the fake “climate strategy” memo and any quotations from the same, from their blogs, Web sites, and publications, and to publish retractions. The individuals who have commented so far on these documents did not wait for Heartland to confirm or deny the authenticity of the documents. We believe their actions constitute civil and possibly criminal offenses for which we plan to pursue charges and collect payment for damages, including damages to our reputation. We ask them in particular to immediately remove these documents and all statements about them from the blogs, Web sites, and publications, and to publish retractions. How did this happen? The stolen documents were obtained by an unknown person who fraudulently assumed the identity of a Heartland board member and persuaded a staff member here to “re-send” board materials to a new email address. Identity theft and computer fraud are criminal offenses subject to imprisonment. We intend to find this person and see him or her put in prison for these crimes.

Apologies: The Heartland Institute apologizes to the donors whose identities were revealed by this theft. We promise anonymity to many of our donors, and we realize that the major reason these documents were stolen and faked was to make it more difficult for donors to support our work. We also apologize to Heartland staff, directors, and our allies in the fight to bring sound science to the global warming debate, who have had their privacy violated and their integrity impugned. Lessons: Disagreement over the causes, consequences, and best policy responses to climate change runs deep. We understand that. But honest disagreement should never be used to justify the criminal acts and fraud that occurred in the past 24 hours.

As a matter of common decency and journalistic ethics, we ask everyone in the climate change debate to sit back and think about what just happened. Those persons who posted these documents and wrote about them before we had a chance to comment on their authenticity should be ashamed of their deeds, and their bad behavior should be taken into account when judging their credibility now and in the future.  The Heartland Institute is a 28-year-old national nonprofit organization with offices in Chicago, Illinois and Washington, DC. Its mission is to discover, develop, and promote free-market solutions to social and economic problems. For more information, visit our Web site at http://www.heartland.org or call 312/377-4000.

At the same time our own Professor Bob Carter is under attack for receiving some funds from Heartland. In the alarmist Fairfax press, Carter "did not deny he was being paid by The Heartland Institute, but would not confirm the amount, or if the think tank expected anything in return for its money."

DISCLAIMER: NCTCS receives no funding for this blog.

Perhaps Ben Cubby would like to examine funding for blogs that try to blur the truth such as  DeSmog and Skeptical Science.

Perhaps Ben Cubby would advise why he didn't rush into print when the REAL Climategate emails were exposed but dashed into print when he got news of the FAKE Heartland (now known as FAKEGATE) email.