The skipper has since written a book about the voyage. 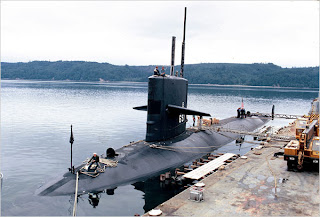 Under-ice mapper. Commissioned in 1966, the U.S.S. Queenfish was a nuclear-powered attack submarine, the first in a new class designed with additional abilities for sailing under ice.

The Queenfish had upward-looking sonar that could map the jagged underside of Arctic ice and rudders and control surfaces that were reinforced to break through thin ice without damage. 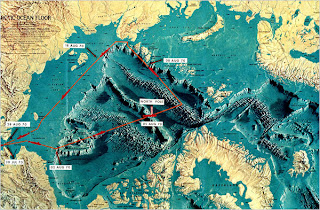 Two-part mission. The Queenfish set off in late July 1970 on a mission to survey the undersea Arctic .
Although far smaller than the Atlantic or the Pacific, the Arctic Ocean is six times
the size of the Mediterranean Sea but still relatively unexplored because of the
constantly changing ice cover, which averages 10 feet thick.

For the second half of the voyage, the submarine explored the continental shelf off
Siberia, within the 230 miles of shore that the Soviet Union claimed as territorial
waters but outside the 12 miles that the United States recognized.
To avoid identification by the Soviets, all markings on the submarine including the
number were removed. 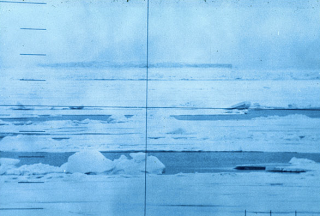 Thinning ice. This view through the periscope on Aug. 3 was typical: ice and water. The first half of the
Queenfish's journey retraced most of the path that the U.S.S. Nautilus took in its historic 1958 trip to
the North Pole, the first vessel to travel there under the ice.
Alfred S. McLaren, the Queenfish's commander, wanted to compare the ice
conditions of 1970 with those 18 years earlier.
The ice had, on average, thinned 28 inches between those two voyages. 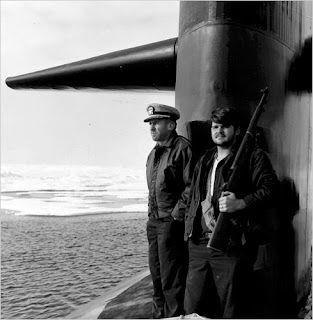 Polar bear watch. Commander McLaren and a crew member stand on watch for polar bears. Later
in the voyage, the Queenfish had a memorable encounter with a polar bear family. 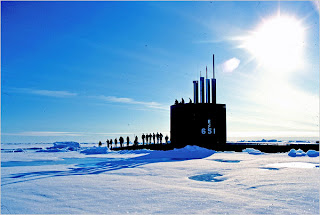 Makeshift number. On Aug. 5, the Queenfish became the 10th American submarine to reach the geographic North Pole.
It then surfaced through a hole in the ice about 500 yards away. Notice the number.
To avoid identification during its secret survey along Siberia , the number and other
identifying markings had been removed from the Queenfish.
But for these photographs at the North Pole, the crew affixed numbers made out of
cardboard. 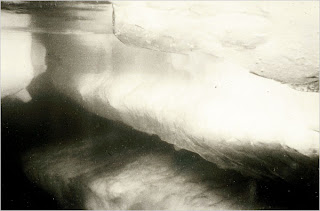 A cold swim. A team of scuba divers swam in the 29.5-degree water to take photographs of the underside of the ice.
Winds and currents cause ice floes to pile up on each other. Later analysis showed that
the ice within eight miles of the North Pole was, on average, 13 feet thick.
In parts, where the ice floes piled up, it was close to 58 feet thick; in other spots, where
the ice had been pushed aside, there was open water. 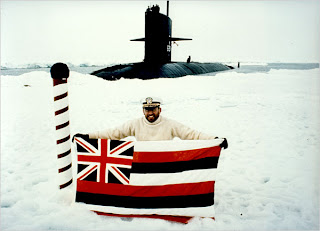 Polar photo of Commander McLaren posing with the Hawaiian state flag at the North Pole.
(The home port of the Queenfish is Pearl Harbor in Hawaii .)
The 117 members of the crew had to share the limited amount of clothing
deemed acceptable for photographing, including the 'submarine sweater'
Commander McLaren was wearing.
The one hour allocated for photographs stretched to more than six hours. 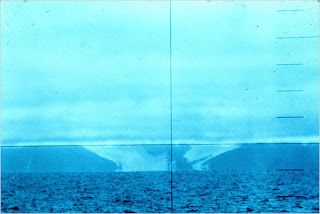 Soviet glaciers. After departing the North Pole, the Queenfish surveyed a volcanic ridge, then headed
to the Siberian coast.
Here is a periscope view of glaciers on October Revolution Island . 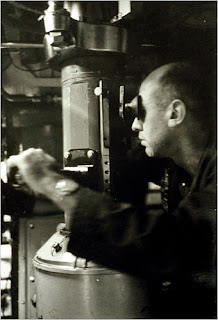 Up scope. Another time, Commander McLaren looked through the periscope and saw ... 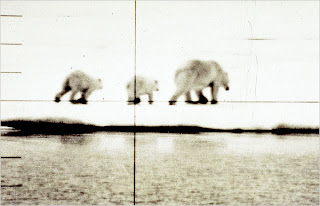 The three bears. ... A polar bear and two cubs walking on the ice pack. 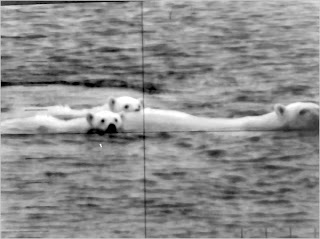 Bear attack. The polar bears jumped into the water and swam directly at the periscope.
'The cross hairs are on her nose,' Dr. McLaren recalled in 2002. 'And I'm thinking,
'How am I going to explain teeth marks on my periscope when I get back to port?' '
The bear sniffed at the periscope and turned away, with the cubs following. 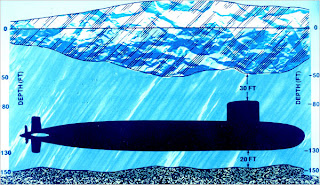 Tight squeeze. In places, the Queenfish, 54 feet high in the middle, found itself hemmed in by ice above and sea floor below.
Scraping the seabed or grazing the overhanging ice could have damaged the propellers or rudder.
At one point, the Queenfish entered an underwater ice cul-de-sac. It took an hour for it to back out safely. 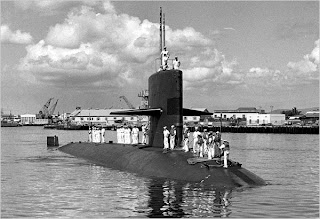 Mission accomplished. The Queenfish passed south through the Bering Strait on Aug. 30, after traveling 3,100 nautical miles along the Siberian coast.
It arrived at Pearl Harbor , its home port, on Sept. 11, 1970.
(Note that there is no number on its side, unlike the photograph at the North Pole.)
Posted by Geoff on February 09, 2012 No comments:

These are their records for New Zealand

These figures are concealed by the IPCC and by all of the official "experts" and "peer reviewed" articles in learned journals. where the results are subjected to varous mathematical tricks to try and claim that the figures support the claim by the global wareming scientists that the sea level is rising. They have foisted this attitude on local authorities in New Zealand in order to persuade them to take urgent measures to prepare for their predicted disaster to their communities.

The favourite mathematical device is linear regression, a procedure that ignores variability and emophasizes the importance of the earlier, less reliable measurements. Sea level equipment is prone to damege from constant battering by the sea particularly by severe storms, which even cause false wrong low readings. Some harbourmasters take measures to increase the level within a harbour to take larger ships. All the earlier readings thus tend to have a negative bias. The use of GPS levelling equipment plus more sophisticated equipment have tended to reduce this bias, so that the most reliable readings for deciding a future trend are the most recent ones, not the earlier ones

In most cases these recent figures show no evidence of a change in sea level anywhere in New Zealand. They should be used as a guide to future behaviour instead of  reliance on untested climate models

"To kill an error is as good a service as, and sometimes better than, the  establishing of a new truth or fact"    Charles Darwin"
Posted by Geoff on February 09, 2012 No comments:

“THE CO2 LIES … pure fear-mongering … should we blindly trust the experts?”

That’s what Germany’s leading daily Bild (see photo) wrote in its print and online editions today, on the very day that renowned publisher Hoffmann & Campe officially released a skeptic book – one written by a prominent socialist and environmental figure.

This is huge. More than I ever could have possibly imagined. And more is coming in the days ahead! The Bild piece was just the first of a series.

Mark this as the date that Germany’s global warming movement took a massive body blow.

Pierre Gosselin is a US Citizen living and working in Germany.

One of the founders of  the German Green movement - Professor Dr. Fritz Vahrenholt, a social democrat and green activist - decided to write a climate sceptical book when, after he was asked to reviewed an IPCC report on renewable energy, he found hundreds of errors and, when he pointed these out to the IPCC, he was brushed aside.


Stunned, he asked himself, “Is this the way they approached the climate assessment reports?”

Vahrenholt decided to do some digging. His colleague Dr. Lüning also gave him a copy of Andrew Montford’s The Hockey Stick Illusion. He was horrified by the sloppiness and deception he found. Persuaded by Hoffmann & Campe, he and Lüning decided to write the book. Die kalte Sonne cites 800 sources and has over 80 charts and figures. It examines and summarizes the latest science.

Read the full story at NoTricksZone. For Dr Vahrenholt's  bio -see HERE
Posted by Geoff on February 09, 2012 No comments: