Roseanne from Trailers Parks to the White House? 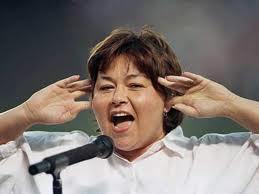 According to news agencies including Reuters, Roseanne Barr has "submitted paperwork in hopes of becoming the Green Party's candidate."


"I will barnstorm American living rooms," she said in a candidate questionnaire submitted to the party, according to the AP. "Mainstream media will be unable to ignore me, but more importantly they will be unable to overlook the needs of average Americans in the run-up to the 2012 election."


It's unclear how Barr's political aspirations fit into her hopes to return to scripted television with the upcoming NBC project "Downwardly Mobile." NBC picked up the pilot last month for the comedy, in which she would play a mobile-home park operator who serves as a surrogate mother to the strapped people who live there.

Roseanne Barr  runs a farm in Hawaii growing macadamia nuts, The macadamia is native to Australia.
She claims that she is neither right wing, nor left wing.


"I am no wing. I am an American," she said. "I believe in people-ism. Solutions that work for everybody.  I think we should stop dividing ourselves and get food to the hungry and decent food to people all over the world. Clean water. Decent fuel that doesn’t poison us. We're so smart. We can regenerate limbs with stem cells. We can grow safe and good food and get along."

Let us hope that some Americans have seen the disaster of Australia's experience with the Green gillard Governemnt.
Posted by Geoff on February 04, 2012 2 comments: