From an article by David Rose - the (UK) Mail Online:


The supposed ‘consensus’ on man-made global warming is facing an inconvenient challenge after the release of new temperature data showing the planet has not warmed for the past 15 years.

The figures suggest that we could even be heading for a mini ice age to rival the 70-year temperature drop that saw frost fairs held on the Thames in the 17th Century.

Based on readings from more than 30,000 measuring stations, the data was issued last week without fanfare by the Met Office and the University of East Anglia Climatic Research Unit. It confirms that the rising trend in world temperatures ended in 1997.

Leading Scientists told the MailOnline that the sun is now heading to a minimum of its output. 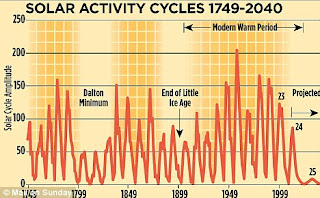 Solar output goes through 11-year cycles, with high numbers of sunspots seen at their peak.
We are now at what should be the peak of what scientists call ‘Cycle 24’ – which is why last week’s solar storm resulted in sightings of the aurora borealis further south than usual. But sunspot numbers are running at less than half those seen during cycle peaks in the 20th Century.
Analysis by experts at NASA and the University of Arizona – derived from magnetic-field measurements 120,000 miles beneath the sun’s surface – suggest that Cycle 25, whose peak is due in 2022, will be a great deal weaker still.

The Met Office has issued a paper that said there is a 92 per cent chance that Cycle 25 "and those taking place in the following decades will be as weak as, or weaker than, the ‘Dalton minimum’ of 1790 to 1830."


Dr Nicola Scafetta, of Duke University in North Carolina, is the author of several papers that argue the Met Office climate models show there should have been ‘steady warming from 2000 until now’.
‘If temperatures continue to stay flat or start to cool again, the divergence between the models and recorded data will eventually become so great that the whole scientific community will question the current theories,’ he said.
He believes that as the Met Office model attaches much greater significance to CO2 than to the sun, it was bound to conclude that there would not be cooling. ‘The real issue is whether the model itself is accurate,’ Dr Scafetta said. Meanwhile, one of America’s most eminent climate experts, Professor Judith Curry of the  Georgia Institute of Technology, said she found the Met Office’s confident prediction of a ‘negligible’ impact difficult to understand.
‘The responsible thing to do would be to accept the fact that the models may have severe shortcomings when it comes to the influence of the sun,’ said Professor Curry. As for the warming pause, she said that many scientists ‘are not surprised’.

From the UK Met Office - (link)


New research has found that solar output is likely to reduce over the next 90 years but that will not substantially delay expected increases in global temperatures caused by greenhouse gases.

Carried out by the Met Office and the University of Reading, the study establishes the most likely changes in the Sun's activity and looks at how this could affect near-surface temperatures on Earth.

It found that the most likely outcome was that the Sun's output would decrease up to 2100, but this would only cause a reduction in global temperatures of 0.08 °C.

This reduction would virtually cancel out the warming since the Little Ice Age. Hmmm...


The study also showed that if solar output reduced below that seen in the Maunder Minimum - a period between 1645 and 1715 when solar activity was at its lowest observed level - the global temperature reduction would be 0.13C. 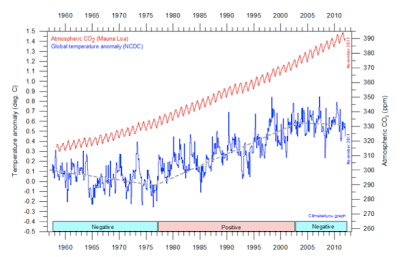 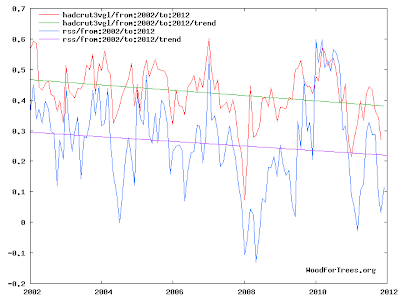