An extensively peer-reviewed study published last December in the Journal of Atmospheric and Solar-Terrestrial Physics indicates that observed climate changes since 1850 are linked to cyclical, predictable, naturally occurring events in Earth’s solar system with little or no help from us. The research was conducted by Nicola Scafetta, a scientist at Duke University and at the Active Cavity Radiometer Solar Irradiance Monitor Lab (ACRIM), which is associated with the NASA Jet Propulsion Laboratory in California. It takes issue with methodologies applied by the U.N.’s Intergovernmental Panel for Climate Change (IPCC) using “general circulation climate models” (GCMs) that, by ignoring these important influences, are found to fail to reproduce the observed decadal and multi-decadal climatic cycles.

The IPCC models fail to incorporate climate modulating effects of solar changes such as cloud-forming influences of cosmic rays throughout periods of reduced sunspot activity.


At least 50-70% of observed 20th century warming might be associated with increased solar activity witnessed since the “Maunder Minimum” of the last 17th century.


From natural observation, I think that I could confirm that - More clouds tend to make conditions cooler, while fewer often cause warming.

Is this the latest science?


Dr. Scafetta’s study applies an astronomically-based model that reconstructs and correlates known warming and cooling phases with decadal and multi-decadal cycles associated with influences of planetary motions, most particularly those of Jupiter and Saturn. This “astronomical harmonics model” was used to address various cycles lasting 9.1, 10-10.5, 20-21, and 60-62 year-long periods. The 9.1-year cycle was shown to be likely related to decadal solar/lunar tidal oscillations, while those of ten years and longer duration relate to planetary movements about the Sun that may have solar influences that modulate electromagnetic properties of Earth’s upper atmosphere which can regulate the cloud system.

The First: James Taylor writing for Forbes Magazine in answer to a previous piece by Peter Gleick. I love his headline where he calls the Alarmists "The Deniers."

Gleick’s global warming beliefs are misguided and unsupported by sound science, but I nevertheless empathize with his pain and frustration that few people seem to agree with him. A person of thinner skin than me might be offended by Gleick’s frustration-induced rant, but I believe the best remedy is truth and understanding. Accordingly, I understand Gleick’s pain and I will present some truths that might ease Gleick’s anguish if he listens to them with an open heart and mind.

Gleick sets the tone for his blog post in the very first sentence, where he begins his column by stating, “The Earth’s climate continued to change during 2011….” Here, in the first eight words of his column, Gleick unwittingly reveals one of the primary reasons why he is so wrong in his dire warnings of a human-induced global warming crisis. Gleick and his fellow global warming alarmists are the ultimate climate change deniers.

The Second story is a real winner. Dr David Whitehouse had a win. He won a bet. (From The Observatory)


In December 2007 I wrote what I thought was quite a straightforward article for the New Statesman pointing out that it was curious that when so many voices were telling us that global warming was out of control, and that the global warming effect dwarfed natural fluctuations, the global annual average temperature hadn’t increased for many years. I wasn’t promoting any particular point of view just describing the data. The New Statesman jumped at it.

David writes that it created a storm of comments and a fuss in the office of The New Statesman. It reached the BBC's radio programme on numbers and statistics -"More or Less."


Almost at the last minute the programme-makers came up with the idea of a bet. It was for £100 that, using the HadCrut3 data set, there would be no new record set by 2011. It was made between climatologist James Annan and myself. His work involves analysing climatic data and validating climate models. He accepted enthusiastically as he has a perchant for taking on 'sceptics.' The presenter said that if the global temperature didn’t go up in the next few years, “there would be some explaining to do.”
Later today, January 13th, “More or Less” returns to the bet, which I am pleased to say I won, though I note that this bet, or its conclusion, is not yet mentioned on Annan’s Wikipedia entry despite his other climate bet being discussed. 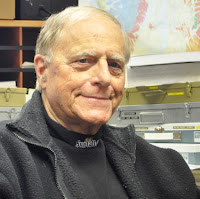 
Easterbrook has studied climate change from the ice ages to the present day.  His focus is in studying the movements of glaciers from climate change, as well as doing isotopic analysis of the elements found in ice cores.

He believes the Earth is currently in a cooling period.  He continues to research climate change with an international team of over 50 members, including solar physicists, atmospheric physicists and glacial geologists.  He is the author of eight books and more than 150 journal publications, including “Evidence-Based Climate,” which was published in September 2011.

Easterbrook: "The whole issue of climate change rests with data. My whole approach is to look at the data.  Unfortunately, a lot of politics has gotten involved with the sciences that relate to climate change, specifically because there are huge amounts of money involved, like hundreds of billions and trillions of dollars.  There’s a huge amount of power.

Climate change is being used as a lever to try to push for a world government.  This is being done in international conferences sponsored by the United Nations that meet every year. The last one was just in Durban. So, unfortunately because of that, there is a lot of rhetoric and a lot of selective media coverage.
My message is look at the data and make up your own mind.  My opinion versus somebody else’s opinion is something that you can argue about all day. If you look at the data, the data will tell you way more than anything anybody’s opinion will. I have worked with a lot of data that relates to the changing of climate. The data is very clear."