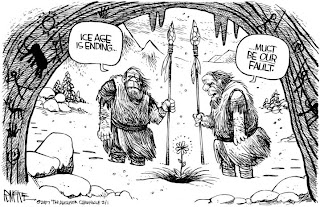 Benny Peiser's CCNet published a paper (HERE) ESSAY: ON THE CAUSE OF ICE-AGES  By Fred Hoyle and Chandra Wickramasinghe.


The renewal of ice-age conditions would render a large fraction of the world's major food-growing areas inoperable, and so would inevitably lead to the extinction of most of the present human population.
Since bolide impacts cannot be called up to order, we must look to a sustained greenhouse effect to maintain the present advantageous world climate.

This was reported by Popular Science: Human CO2 Emissions Could Avert the Next Ice Age

Earth could be entering a new Ice Age within the next millennium, but the deep freeze could be averted by warming from increased carbon dioxide emissions. Humans could be thwarting the next glacial inception, a new study says.

Also reported by The American Interest: Global Warming To Save The Planet?


....an international team of scientists headed by Cambridge University researcher Luke Skinner projects that sometime in the next 1500 years a devastating new Ice Age will descend on Planet Earth.  As in past Ice Ages, glaciers would cover much of the northern hemisphere, many species would face extinction and the productivity of the biosphere would diminish as fertile farmlands went under the ice.

But, the scientists say, that won’t happen now, thanks to man’s new best friend: greenhouse gasses. Rising levels of CO2 will offset the natural forces leading to a new Ice Age, saving civilization from its greatest test yet.

Even the alarmist BBC got in on the action: Carbon emissions 'will defer Ice Age'
The Beeb's report is by Richard Black. (Does that name ring your alarm bells or should that be your alarmist bells?)


Human emissions of carbon dioxide will defer the next Ice Age, say scientists.
The last Ice Age ended about 11,500 years ago, and when the next one should begin has not been entirely clear.
Researchers used data on the Earth's orbit and other things to find the historical warm interglacial period that looks most like the current one.
In the journal Nature Geoscience, they write that the next Ice Age would begin within 1,500 years - but emissions have been so high that it will not.

The important point that you have to accept with the above reports is the falsified hypothesis that CO2 causes runaway global warming. As this blog has persistently pointed out, warming comes first and then the rise in CO2 follows, with a lag of ~800 years (see eg here and here) At the moment we are around 800 years from the end of the medieval warm period (MWP)


That would be a real travesty if we delayed the next ice age, but there are a a couple of minor problems.


It's refreshing to see that CO2 is sometimes getting good press. You really don't want the temperatures to drop by 10 °C. On the other hand, all the other "details" that are being written about these questions are preposterous beyond imagination.

It's being said that the warm era between two ice ages is usually around 11,000 years (whatever is the exact definition of the boundaries) but we have already enjoyed over 11,500 years since the last ice age so a new ice age is overdue.

CO2 will only be modified due to the human activity for a few centuries which is much shorter than the time needed for the ice age cycles to collect several Celsius degrees – that requires thousands or tens of thousands of years.

In particular, we will probably run out of fossil fuels in less than 300 years. I am being generous here; my expectation would be lower. At the peak, there will be some concentration which may be anywhere between 600 and 2000 ppm. I don't know how far the mankind will get. I am just sure that once the concentration will reach 1000 ppm, people will already be realizing very well that there's nothing wrong about such elevated concentrations and they will be able to understand that 2000 ppm isn't a problem, either.

Read more at The Reference Frame.